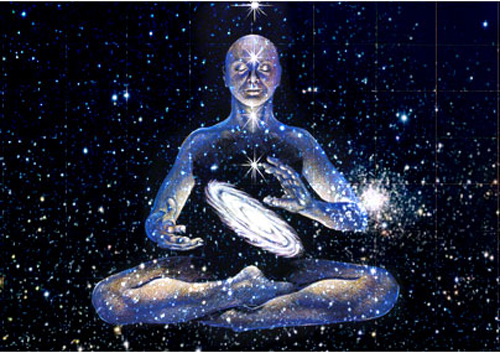 This mass energetic charge-up of our solar system is also having a direct effect upon our DNA, causing evolution to occur on a very rapid timescale. Various scientists have discovered different pieces of the puzzle, but hardly anyone sees how they all interconnect.

For those who have watched Wisdom Teachings on Gaia or read my books, the facts behind these conclusions are inescapable. This DNA change is not something that happens all at once at the end of the cycle. You are going through this change right now.

Season 29 of Wisdom Teachings goes through some of the interesting data on this mass DNA evolution over the course of 19 different episodes. In short, if you watch Seasons 27 through 29 of the show, you will see 47 half-hour episodes that nicely summarize the “core argument” for Ascension — almost a year of weekly programs. This argument is all based on the original message of the Law of One, with the appropriate scientific data to back it up.

For the first two and a half years of my time with Gaia, this scientific argument in favor of Ascension was the main focus of my work. Then, beginning in July 2015, I was able to convince Corey Goode to come forward as an insider in what became a new show, Cosmic Disclosure.

For the first time, I had someone who was willing to go fully on record with information I had previously only heard about on a private, confidential basis from others. Three of the people who provided this information died in the first two weeks of October 2018.

What made Corey’s information so unique was that he had apparently received stunning new ET contacts, beginning in March 2015, in addition to his prior experiences in the Secret Space Program. Before too long, the ETs that allegedly contacted Corey revealed themselves to be the same beings that authored the Law of One series in 1981-83.

Many interesting narratives came through in the three years we did the show, including a wide variety of new data on the Ascension process.
Corey had barely even read the first volume of the Law of One after being asked, but his information often referenced it so precisely that I had to go back and re-read it to see the connections.

The interconnections are so complex that without a long-term, dedicated study of the Law of One and Goode’s testimony, it is impossible to truly appreciate the scope and depth of the story.
This included the alleged appearance of beings from the inner earth calling themselves the Anshar. I later went back and found numerous references to this group in the Law of One, though not by that name.

Other insiders also came forward with supporting information, including Pete Peterson, William Tompkins and Emery Smith.
I was able to convince Peterson and Smith to come forward after both men had been privately sharing information with me for nearly a decade.

Frustrating Personal Details Do Not Invalidate the Material

I lived with Carla Rueckert and Jim McCarty, the surviving members of the Law of One team, full time from 2003 to 2005. I also lived right near their land in Milton, Kentucky for another year, coordinating efforts with various volunteers. There were plenty of disappointing events that took place during those three years, mostly because I had put them on a pedestal before I had arrived.

Soon after I moved in, I became very distinctly aware of how flawed and human they were, as are we all. Out of respect I have shared hardly any specifics, and do not plan to. The same thing is the case with my insiders, including Corey Goode, who in many ways received the next major phase of the Law of One contact, in my estimation.

Regardless of whether Corey’s experiences were literal, tangible realities or dreamlike telepathic messages, they nonetheless were very helpful. (I do believe they took place in physical reality.)
I do find it interesting to see how my own life has woven through these various situations, including being present at the original Disclosure Project event in 2001 and meeting the witnesses, including the late Karl Wolfe.

As I have seen, you do not have to be any type of “special person” to have these contacts. It has more to do with being the right person at the right time.
The Law of One contact only lasted for three years, from 1981 to 1983. Carla and Jim lived for many years thereafter, but the main contact never returned as it had during that time.

Similarly, the active phase of Corey’s contacts went on for three years. Much data was conveyed that we can still spend years poring over. It is unclear whether additional contacts will occur at this point, apart from Anshar contacts regarding personal issues that he is still receiving. What we do know is that we have a blueprint for the future that clarified and enhanced the Law of One message in many different ways.

The “Alliance” Is Far From Perfect Either 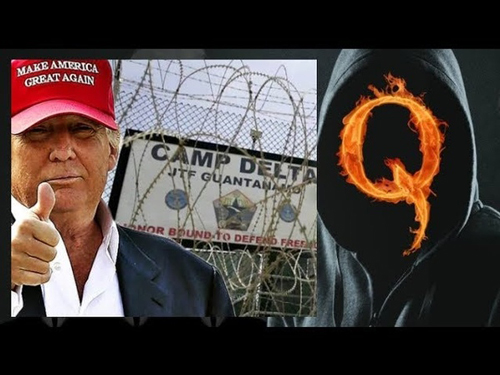 According to DaMartin, the number of “sealed indictments” on the books has gone up to 55,677 as of September 30th, 2018 until October 27, 2018.
The estimations where the number may well expand to the range of 60,000. As we have argued in multiple past articles, there is no conventional explanation for why so many sealed indictments are on the books.

We are expecting an international “mass arrest” of Cabal elites to take place once these indictments unseal. The delay has been extremely frustrating, to say the least — particularly as the supporting evidence grows greater and greater.
It is important to remember that the Alliance is a group of real people, complete with flaws, doubts, insecurities and personality distortions.
Everything that is pushing us toward disclosure is still very much happening in the real world. Heroes can be deeply flawed, and still finish the job.

It Is A Very Interesting Juxtaposition

One of the most consistent themes in the Law of One series is how incredibly persistent the negative forces are at disrupting positive plans. We naturally assume that we will not be affected by the malefic forces, that we are “stronger than that”, and it will have no effect on us. The malefic forces are incredibly efficient in fulfilling their evil plans. They can find the slightest weakness in someone’s personality and dramatically enhance it.

Many people cannot possibly grasp the idea that anything positive is coming out of the Trump administration whatsoever. I can remind readers that the Alliance has been fighting and dying for this cause since at least the 1950s, but people get very hung up on the present situation.

The malefic forces seem to be doing an incredible job at making it appear that there is no positive angle to the current situation. This influence works through the personality structures of individuals, and how they then interact with others. Even the die-hard Q Anon fans must be feeling extremely bleak in light of the extended absence of posts we are now seeing.

The Alliance spoke to everyone’s deep frustration on October 9th, and has since disappeared for the ensuing seventeen days.
Here is a partial quote, from what is post number 2381 on QAnon.pub:

“https://qanon.pub/
Q !!mG7VJxZNCI No.373
Oct 9 2018 20:42:13 (EST)
Statement release 10.9.18 [p_AUTHORITY1]
General Statement:
We understand that there is extreme fatigue and frustration re: the wheels of justice [slow].
Exclude emotion and personal desire, instead use logic and critical thinking based on situational awareness.
[(How do you) undo a lifetime of evil & corruption [infestation] in the span of less than 2 years w/ a corrupt DOJ & FBI in place?]
[Process & Planning – Law and Order]
[Military OP]
How can you make arrests [non-military] prior to first fully cleaning out corrupt elements [at the top] of those departments [FBI][DOJ] that oversee ‘investigation & prosecution’ in the United States?
[They [themselves] are the very ones engaged in the illegal treasonous acts.]
The post goes on from there, including a list of many different officials that have already been fired or forced out of office from the FBI, DOJ and the like.
[UPDATE: A commenter pointed out that the number of this post, 2381, is the US penal code statute number for treason.]”

The silence in the aftermath of this post has been particularly dramatic, making everyone wonder what will happen next. We used to be able to get many briefings on what was going on, but our own insider sources have gone completely silent.

This does not at all mean that things have just fizzled out. Quite to the contrary, this is an indication that the behind-the-scenes fight to defeat the Cabal is now at an all-time high. Before we delve into all the intricacies of the present, let’s do a quick review of where we last left off on September 8th, 2018.

A previous article from September 8th predicted Mass Arrests that will occur after the unsealing of what is now over 55,000 indictments. Apparently, numerous spy satellites and computers that were the backbone of Deep State surveillance have been taken down in a stunning move by the Alliance. Now that the Deep State has been effectively blinded, the final preparations are being made for the arrests — with less probability of interference.

In a third update on September 10th, we also discussed the sudden, suspiciously-timed appearance of a mega-hurricane that would have bulldozed Washington DC.
After we published the third update, the hurricane first looked like it was getting much worse, only to then slow down, weaken and take a bizarre, sharp left turn at the last minute.

We have disclosed the secrets of weather warfare on this site for many years. It involves the use of intense, high-frequency microwave beams. Had that hurricane hit DC, the power would have been down for weeks, and the resulting arrests could be further delayed.

In a previous three-part mega-article, I ended with photographs of the Orion space capsule, positioned on the White House lawn: 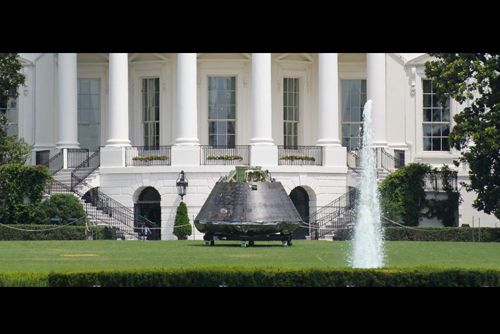 This, coupled with announcements in March and May about the creation of a “Space Force” in the US military, were compelling clues that a UFO-related disclosure was imminent. Later in this article, we will review the data on the “Space Force” that was publicly released at the time.

The blatant, public proposals for a “Space Force” were a more-than-passing hint that a secret space program would soon be declassified. Even despite these interesting clues, nothing could have prepared us for seeing it in black-and-white in Q posts.

I could go on and on with emotional language about how exciting all of this is — finally seeing something I’ve worked my entire life for coming to fruition. Knowing what I know about the Q Anon posts, seeing them formally acknowledge the Secret Space Program was truly mind-blowing.

Here is a screen capture of the two Q Anon posts of interest as they appeared on Wednesday, September 19th. Technically they appeared in reverse order, but this is how they appear on https://qanon.pub/, the go-to site for all Q posts: 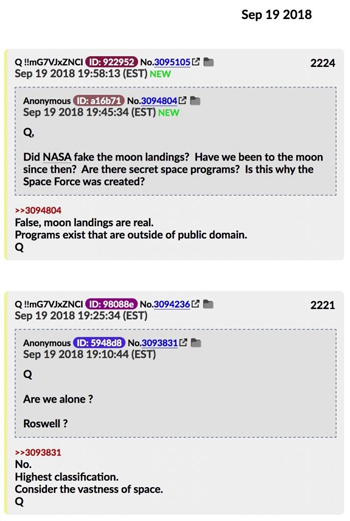 That one answer opens up a veritable universe of speculation — including serious questions about the veracity of Corey Goode, William Tompkins, Pete Peterson, Emery Smith and others’ statements.