MOMENT OF TRUTH: The Political Stuff Nobody Wants to Talk About (3)


Even Digg.com Jumped In

Digg.com is a “content aggregator” site that takes the most popular stuff on the internet, from Reddit.com and elsewhere, and packages it in one page.
I hit Digg’s homepage every day, with a bookmark. It is one of my primary places to visit, other than Drudge Report. I do not visit social media at all except to make announcements. 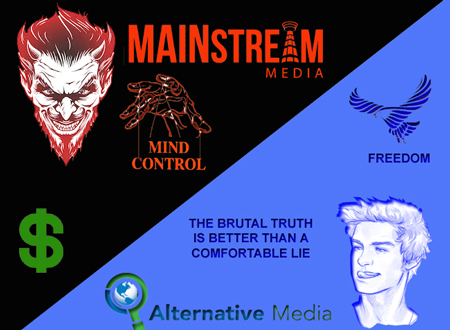 Digg is pretty darn mainstream, but they still nonetheless have surprises. Consider this article from October 24th, where they were brave enough to speak “truth to power” in this situation: Remember Bookmarks in a Time of Social Media Mass Brainwashing:
“Just within the past month:
50 million Facebook users had their personal information stolen,
Instagram is more than happy to prioritize growth over the mental health of their users,
Facebook faked video view metrics by up to 900%, which defrauded advertisers and ushered in waves of layoffs in the media industry, and
The New York Times Editorial Board recently scolded Facebook and Twitter for relying on the media industry to moderate their platforms for them.
The sum total of this is, in the estimation of writer Adam Sternbergh who literally took a course on how to be happy, is that today’s internet is designed to make us upset.
‘If science sought to create a Sadness Generator, it couldn’t do better than Facebook/Instagram,’ tweeted Sternbergh.
I believe him.
We can’t leave our consumption habits up to algorithms developed by profit-seeking companies that claim to know us better than we know ourselves.
The feeds are destroying us. But buried within your web browser lies a solution. That solution is the bookmark.”

Alex Jones Was a Stunning Precedent

Whether he was real, or a paid operative, as some have suggested, the case of Alex Jones in mid-August set a stunning precedent for what we are now seeing in mid-October.
Digg, again, was brave enough to ask the questions other media outlets refused to even address:
“All Alex had left was Twitter, where he was using Periscope to post videos — and then they banned him on that platform as well:
Unilaterally, in a matter of days, Alex was banned from ALL social media.
Then when you tried to go to his website to hear what he had to say, guess what — it was not available due to an utterly massive hack. Interesting timing:
This is Nazi stuff. Old Soviet KGB strategy. Orwellian.”

Is Old Alex So Bad That You Must Be Protected From Hearing Him?

Is Old Alex really so terrifying that even hearing his words is a “thoughtcrime” that the poor, suffering public must be protected from at all costs?
Is it so hazardous to your health to hear an Alex rant that your ears will start bleeding and you must be rushed to the emergency room?
Is his one big, terrible mistake — speculating if Sandy Hook was somehow not exactly as we were told — so terrible that he must lose his freedom of speech? (Almost every single article that wrote about this multi-platform banning used this one argument as if it was all-encompassing.)
Are the social media giants public utilities, or simply good-old-boys’ corporate networks where “He who has the peso has the say-so?”
The Germans cheered when the last independent media source, not controlled by the State, was shut down by the Nazis.
Hardly anyone batted an eye when Q Anon was similarly “deplatformed” from Reddit and other such hosts soon afterwards.

Now With the FISA Memos

The declassification of the FISA memos was something Q Anon had expected to be a mega-bombshell. Instead, due to this mass censorship, hardly anyone even heard about it.
The FISA memos showed absolute proof that the highest-level people in the FBI knowingly constructed an elaborate attack campaign against Trump to sway the election.

Top FBI officials fabricated a wealth of “fake news” stories about Russia collusion, where none actually existed.
They planted these stories out into the media, and then used paid, planted insiders to create mock outrage about the fake news.
They talked about this in their text messages with each other, patted each other on the back, and never thought they’d get caught.
The FBI fought mercilessly — to the death — to stop these FISA memos from being leaked, and yet they came out anyway.

This Fox News Video Should Be Watched

For a long time I absolutely blasted Fox, and it still frankly gives me the chills even though they now co-operate with the Alliance.
Nonetheless, if you can tolerate it just long enough to get through about fourteen minutes, you should carefully watch this anyway:

Q flagged the quote that appears at the 13:35 mark in post number 2229, and it is important enough here to be repeated:

“13:35 (transcript)
Joe DiGenova
‘As I’ve been saying for two years, there’s been a brazen plot to illegally exonerate Hillary Clinton in the email case and then if she had lost, to frame Donald Trump.
And that is exactly what these texts are about.
Whether or not Mr. Strzok and Lisa Page and others are indicted is certainly a question people can debate, but let me just say [this:]
I know there is a grand jury underway. Testimony is being taken about Strzok, Page, McCabe and others involved in this case.
The reason we know it is that James Baker, the former general counsel of the FBI, as turned State’s evidence is fully cooperating with the Inspector General and with the Federal Grand Jury.
I can assure you, Mr. Comey has been very silent in recent weeks and the reason is very simple: he knows he’s going to be indicted’.”

Just So You Don’t Get Confused

When I was talking with the female insider “Mega Anon” about things like this on the phone in 2017, I could easily get confused by all of the names.
So, in case this is happening to you, here is a basic orientation of what is going on:
Peter Strzok was Chief of the Counter-Espionage Section of the FBI. Strzok led the FBI’s softball investigation into Hillary’s use of a personal email server.
Andrew McCabe was the former deputy director of the FBI, from February 2016 to January 2018.
McCabe became the acting director from May 9th to August 2nd, 2017, after Trump dismissed James Comey as the FBI director for corruption charges.
Lisa Page was a top FBI lawyer who exchanged anti-Trump text messages with Peter Strzok, devising elaborate strategies to publicly defame him.
The new texts that are being released reveal Strzok, McCabe and Page committing far worse crimes than previously disclosed.
Even if you hate this president, bear in mind that tampering with a federal election at the level the FBI have provably done is a very serious crime.

The people who hate Trump are probably never going to change their minds. “But what about Russia?”
The US is more divided than it has been since the Civil War. Even mass arrests and disclosure is not likely to change that.
Please bear in mind that in no way do I support a totalitarian Trump-led dictatorship in the aftermath of mass arrests. Not at all.
If there is any sign that this is starting to happen after the big event occurs, believe me, I will be exposing it fearlessly.
My point is this: We absolutely need disclosure in order to survive. Our planet is in serious trouble. The suppressed Secret Space Program technologies will help immeasurably.

Even if you see this as a fight to the death between warring, negative factions, remember this: The one thing they always agreed upon was secrecy.
Once you reveal the kayfabe, once the public knows the whole thing was a scam, politics is forever destroyed. There is no turning back.
The public will be horribly betrayed — and it will take much, much more work to regain that trust than ever before.

In this next post from September 9th, 2018, we see an example where the Q Anon folks believed the FISA memos would have a much larger impact than they actually did, at the time:

The previous part of this article has now had over 700,000 views, and therefore is a very public and popular piece of journalism.
On September 10th, Q warned that there should be no private communications from past, present or future about this mass arrest operation being put online.
It was also stated that the people involved in the operation should have no communications (comms) outside the Q platform.

From this point forward, I stopped seeking new briefings on what is going on. We are so close now that everything is very sensitive.
Eight days later, the silence paid off when Q dropped the Big One: not just disclosure, but the Secret Space Program.
Here is where the warning about leaks was posted on September 10th. This is likely why Q has been totally silent since October 9th: 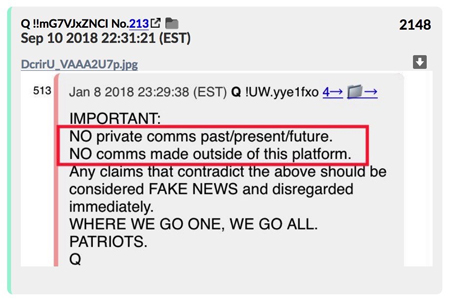 The Goal of Space Force