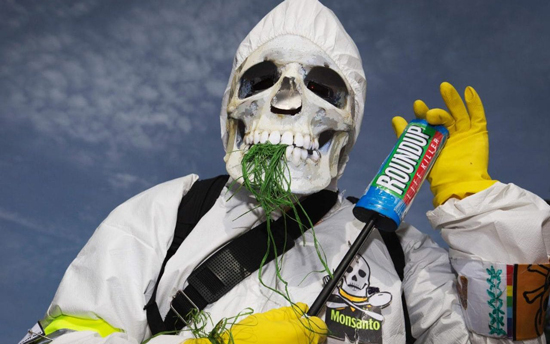 Monsanto aggressively “bullied scientists” and hid weed killer cancer risks, a lawyer argued in July 2018 in a landmark lawsuit against the agrochemical corporation.
“Monsanto has specifically gone out of its way to bully and to fight independent researchers… they fought science” attorney Brent Wisner told the court.

The Guardian reports that Wisner, who spoke inside a crowded San Francisco courtroom, is representing DeWayne Johnson, known also as Lee, a California man whose cancer has spread through his body. The father of three and former school groundskeeper, who doctors say may have just months to live, is the first person to take Monsanto to trial over allegations that the chemical sold under the Roundup brand is linked to cancer. Thousands have made similar legal claims across the US.

In his opening remarks, the Monsanto lawyer George Lombardi alleged that the body of research over the years was on the company’s side: “The scientific evidence is overwhelming that glyphosate-based products do not cause cancer and did not cause Mr Johnson’s cancer.”

The case is significant in part because the judge has allowed Johnson’s lawyers to present scientific arguments. The suit centers on glyphosate, the world’s most widely used herbicide, which Monsanto began marketing as Roundup in 1974, presenting it as a technological breakthrough that could kill almost every weed without harming humans or the environment.

Over the years, however, studies have suggested otherwise, and in 2015, the World Health Organization’s international agency for research on cancer (IARC) classified glyphosate as “probably carcinogenic to humans”.

Roundup products are registered in 130 countries and approved for use on more than 100 crops, and glyphosate has been found in food, a variety of water sources, and the urine of agricultural workers and others. A number of countries have policies banning or restricting the sale and use of glyphosate.

Johnson worked as a groundskeeper for the school district in Benicia, just north of San Francisco, and was responsible for applying Roundup. Lawyers showed the jury photos of lesions and rashes on Johnson’s skin after he was regularly exposed to the chemical and was eventually diagnosed with non-Hodgkin lymphoma (NHL) in 2014, at age 42.

“The simple fact is he’s going to die. It’s just a matter of time”, Wisner said in court, as Johnson lowered his head and his wife cried in the seat next to him. “Between now and then, it’s just nothing but pain.”

Wisner, who said the trial would include commentary from 10 current or former Monsanto employees, also read aloud internal corporate documents obtained during the case. In response to one critical study about glyphosate exposure, Donna Farmer, product protection lead, wrote in an email: “How do we combat this?”

Wisner also referenced an email from Farmer in which she gave colleagues guidance on how they could publicly talk about science, writing: “You cannot say that Roundup does not cause cancer”. The Monsanto lawyer later said this comment had been taken out of context and presented in a misleading way.

Wisner further cited Monsanto emails from decades prior, in which the company was working with a genotoxicity expert who reviewed a series of 1990s studies. He raised concerns about Roundup impacts on humans and suggested further areas of research. After the expert’s analyses, Monsanto representatives began considering finding a different expert and also started working on a press statement saying the product carried no risk, according to Johnson’s lawyer.

Wisner also read documents that he said showed how Monsanto strategized plans to “ghostwrite” favorable research.
Monsanto has continued to assert that its herbicide is safe, a claim that Johnson’s legal team is challenging, arguing that “scientific fraud” has contributed to Roundup marketing.

Lombardi, the Monsanto lawyer, argued that Johnson’s lawyers were “cherry-picking” studies that did not provide a “full picture”, repeatedly pointed to Environmental Protection Agency (EPA) findings approving the use of glyphosate, and argued that the plaintiffs were overstating the significance of IARC’s conclusions. He also said Monsanto had been open about its involvement in research, adding: “Testing has been done by independent scientists, by university scientists, by government scientists”.

Timothy Litzenburg, one of Johnson’s lawyers, called his client “incredibly brave” in an interview with The Guardian before trial, adding: “Whatever happens … his sons will get to know that their dad was brave enough to go up against Monsanto completely alone, and first, before he died.”

In addition to financial compensation, a verdict in Johnson’s favor “would say that his life is worth something”, Litzenburg added. Regardless of the outcome, the attorney said, “so much of what Monsanto has worked to keep secret is coming out”.

Expressing and Receiving Gratitude Benefits Us More Than We Think