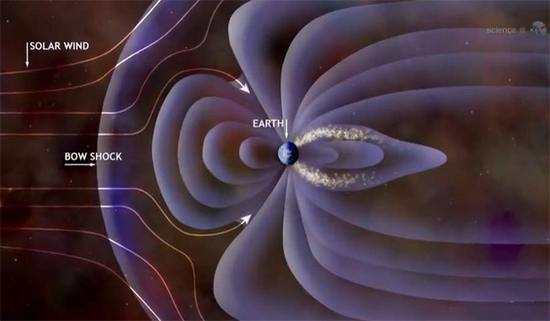 “The portal” is an extraordinary opening in space or time that connects travelers to distant realms. A good portal is a shortcut, a guide, a door into the unknown. If only they actually existed…

It turns out that they do, sort of, and a NASA-funded researcher at the University of Iowa has figured out how to find them.

“We call them X-points or electron diffusion regions,” explained plasma physicist Jack Scudder of the University of Iowa.

Observations by NASA’s THEMIS spacecraft and Europe’s Cluster probes suggested that these magnetic portals open and close dozens of times each day. They’re typically located a few tens of thousands of kilometers from Earth where the geomagnetic field meets the onrushing solar wind.

Most portals are small and short-lived; others are yawning, vast, and sustained. Tons of energetic particles can flow through the openings, heating Earth’s upper atmosphere, sparking geomagnetic storms, and igniting bright polar auroras.

Magnetic reconnection is a phenomenon unique to plasma, that is, the mix of positively and negatively charged particles that make up the stars, fill space and account for an estimated 99 percent of the observable universe.

Reconnection occurs when magnetic field lines cross and release a gigantic burst of energy. It is a fundamental process throughout the universe that taps energy stored in magnetic fields and converts it into heat and energy in the form of charged particle acceleration and large-scale flows of matter.

However, magnetic reconnection can only be studied in our solar system and it is most accessible in near-Earth space. Besides MMS, no mission is currently dedicated to the study of this phenomenon.