Otis T. Carr is one of many examples throughout history where there are clues that highly advanced technologies like anti-gravity crafts are actually legit. Given everything we know now, as well as what happened to Carr, only strengthens this suspicion. 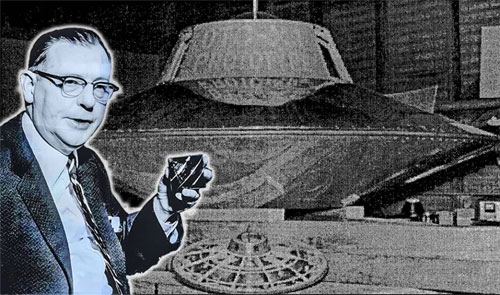 In the late 1950s, OTC Enterprises, Inc. of Baltimore, Maryland put out a statement that was published in the April 3rd edition of the Baltimore Enterprise. The statement came in the form of a claim that the company was ready to manufacture a flying saucer that was capable of travel outside of the Earth’s atmosphere. All that was needed was a massive amount of funding, approximately 20 million dollars. The equivalent to that today is probably several billion.

Now keep in mind that this is the 1950s. There was a big wave of UFO sightings at this time, especially after the Atom bomb was dropped. The topic was getting a lot of mainstream media attention. Rumors of “crashed craft, and bodies recovered” that Apollo 14 astronaut Edgar Mitchell claimed were real were running rampant at this time. Did the powers that be or the military-industrial complex have saucer technology at this time? Based on research, it certainly seems that way. Take, for example, a document from the Central Intelligence Agency’s electronic reading room: “A German newspaper recently published an interview with George Klein, famous German engineer and aircraft expert, describing the experimental construction of ‘flying saucers’ carried out by him from 1941 to 1945.”

The document goes on to describe how many people believed flying saucers to be a postwar development. They were actually in the planning stages in German aircraft factories as early as 1941. The document then goes on to mention an experiment described by Klein: “The flying saucer reached an altitude of 12,400 meters within 3 minutes and a speed of 2,200 kilometers per hour. Klein emphasized that in accordance with German plans, the speed of these saucers would reach 4,000 kilometers per hour.” One difficulty, according to Klein, was the problem of obtaining the materials to be used for the construction of the “saucers,” but even this had been solved by German engineers toward the end of 1945, and construction on the objects was scheduled to begin, Klein added.

Otis T. Carr, as mentioned above, had similar claims. He even put on numerous demonstrations for the public and amassed millions of dollars from extremely wealthy people to do so. If they did not believe him, and if he had not shown some promise, how did he receive all of this funding?

Think about it. We now know for a fact that global militaries have long had an interest in the UFO phenomenon. They’ve been asking who, what, where, when and how for a very long time, and of course it’s considered a national security matter. Any individual who has invented, or shows potential to invent craft that is capable of extreme, technologically advanced maneuvers, would not be allowed to develop it, and would be ridiculed like Carr was. This is why the invention secrecy act was made in the early 1950s, with its true aim to protect the interest of the power under the guise of national security.

Otis Carr’s goal was to fly to the moon in his “circular foil spacecraft” on December 7th, 1959.
The “spacecraft” allegedly invented by Carr is much like the ideal spaceship imagined by Plantier and others. It is propelled by an artificial gravitic field (the “Carrotto gravity motor”) and if this were not miracle enough, it uses no fuel. It is powered by the “Utron electric accumulator” – a short of self-charging battery which “uses the Sun’s magnificent force of Electromagnetism by means of natural reproductive chemistry”, to quote the interesting language of the Enterprise ad. Centre for UFO Studies. 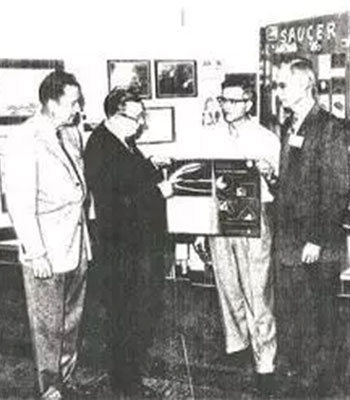 Picture of Wayne Aho, a military intelligence officer who was going to accompany Carr on his trip to the Moon. He claimed it would only take a few hours. Carr is second from the left.

Otis T. Carr was actually a protege of Nikola Tesla, according to independent researcher Doug Yurchey: “Carr and his team constructed a number of fully functional flying saucers in the late 1950s. The flying disk worked and was demonstrated. Carr was serious about taking his craft to the Moon. However, two weeks after a dramatic test flight, their laboratory was forcibly closed, and federal agents confiscated equipment as well as all documentation. Authorities told them Carr’s project would ‘destroy the monetary system of the United States’.”

Carr was heavily criticized, ridiculed, and made a fool of by the press. It is difficult to verify whether his connection with Tesla is actually true or not, but rumors of Carr’s relationship with Tesla were rampant, even in the 50s.

This is a classic story of someone who received lots of public attention and had many failed demonstrations, and apparently, many successful ones as well. Like other great inventors, Carr’s work was seized by the government. This happened in January 1961, when Louis J. Lefkowitz, the Attorney General of New York at the time, stated that “Carr had swindled $50,000”, and later that year True Magazine labelled him as “a hoaxer.” By then, his laboratory had been raided and destroyed, and the group of engineers had been ordered to disband and cease contact with one another.

This is very fishy, and similar to the Stan Meyer water powered car story. Looking at it today, it was quite clear that this was a huge attempt to shut Carr down. These developments and curiosities were not for our world, but were reserved for the black budget world. He was denied an appeal on March 1st, 1961 for his “crime”. He could not pay the fine and served part of a 14-year jail term. After that little is known about what became either of Carr himself or the craft, but they never flew again. Carr is reported to have suffered from ill-health, a broken man. He passed away apparently in Gardnerville, Nevada, in 2005.

In 1952, Carr actually wrote a book called Dimensions of Mystery. The book was mostly written in “code”. According to him, it was the complete layout of his plan and how his machine worked, yet for the common reader, it’s impossible to understand. He did switch from user code and poetry, to actually writing some real statements regarding his intentions, as you can see here: 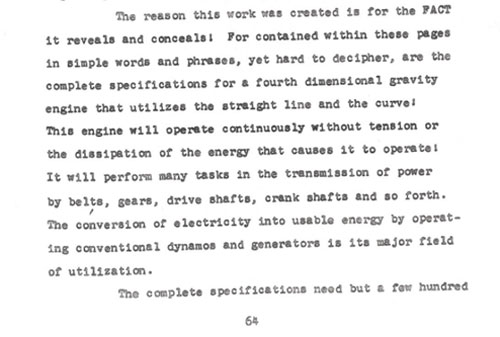 Below is a discussion about the tests that would need to be conducted, and, apparently were conducted. 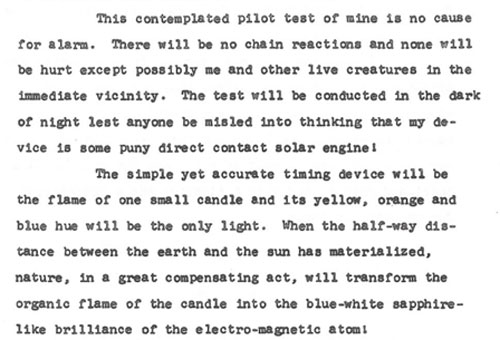 As you can see, just like with most other stories of great technological advancements (there are too many examples to choose from), the global elite has always demonstrated their supremacy by ridiculing concepts that don’t really fit the frame. There are multiple technological developments that have been completely hushed up, for “national security purposes.”

Take this quote from Hal Puthoff, for example. It’s not with regards to UFOs but more to free-energy, which actually go hand in hand and relate directly to each other. Puthoff has published numerous papers on electron-beam devices, lasers and space propulsion and has patents issued in the laser, communications, and energy fields.

Dr. Puthoff’s professional background spans more than five decades of research at General Electric, Sperry, the National Security Agency, Stanford University and SRI International. Dr. Puthoff regularly advises NASA, the Department of Defense and intelligence communities, corporations and foundations. Here’s what he’s had to say: “I’ve been taken out on aircraft carriers by the Navy and shown what it is we have to replace if we have new energy sources to provide new fuel methods.”

Puthoff is now part of the To The Stars Academy, who have publicly disclosed that they are working on technology that mimics the flight patterns of observed UFOs.

Below is the design of the OTC X-1, which you can see here in higher resolution. 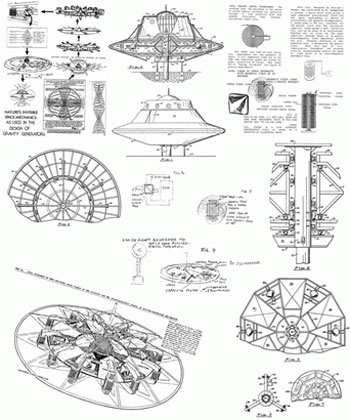 Let’s keep an open mind, and not brush off revolutionizing technologies just because they break the laws of physics as we know them; after all, such laws are made to be broken. It’s similar to when Einstein published his paper on special relativity that completely shattered what we thought we knew back then. Today, we are more aware of how the giant national security apparatus intervenes, and given all of the information that’s emerged regarding the subject of exotic technologies like anti-gravity crafts, it’s easier to see 70 years after the fact what really happened to Otis T. Carr.