There are many foods that are beneficial to your body’s liver, some of which are common enough to work into your everyday diet, and others that can be incorporated to provide maximum benefits.
Many detox diets involve foods that promote a healthy liver. Here are the top 10 foods to help cleanse toxins from your body naturally. 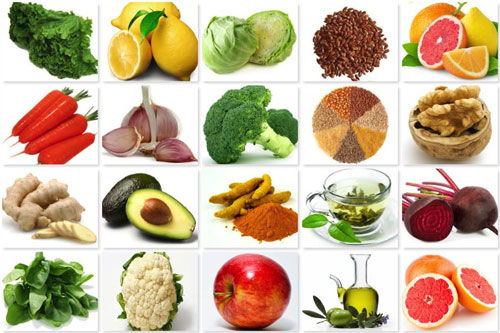 Ginger is known to provide many health benefits. Ginger acts on your digestive system by increasing secretions and boosting both metabolism and circulation. In an animal study, tests showed that ginger helped improve the liver’s histological profile. Lipid peroxidation levels went down while the level of antioxidant enzymes in the blood increased. Researchers concluded that ginger could be very effective in alleviating liver damage. Another ginger research project shows its ability to lower hepatic triglyceride levels. Ginger was also able to demonstrate its antidyslipidemic properties and effects as an antioxidant.

Commonly referred to as the Indian gooseberry, amla provides natural liver revitalization. It is commonly used in India for treating enlarged livers. Researchers found that its hepatoprotective effects can also treat liver conditions like jaundice. Hypolipidemic properties can reduce the load placed on the liver. Amla may be good for treating non-alcoholic related fatty liver disease.

A daily dose of omega-3 is a good way to promote liver health. Omega-3 is present, among others, in certain enriched eggs, and in walnuts. Omega-3 inhibits triglyceride synthesis in the liver. Triglycerides are fats that can damage liver tissue, high amounts are bad for cardiovascular health. A study showed hyperlipidemia patients were able to normalize the fatty liver with omega-3 fatty acids.

Vegetables with a strong odor like garlic and onion are excellent for liver health. They contain sulfur which helps stimulate liver enzyme production. The liver uses those enzymes to eliminate toxins from the body.

Broccoli, cabbage, cauliflower, and Brussels sprouts are also rich in sulfur. They also contain enough glucosinolate to increase enzyme production and help the detoxification pathways in the body.

Berries are rich in polyphenols and anthocyanins. They are a great way to naturally cleanse your body. The potent anti-inflammatory agents and powerful antioxidants make berries a great choice for healthy living. A study involving lingonberries, black currants, and bilberries proved to be effective in significantly decreasing body fat in animal test subjects on a high fat diet.

Flavonoids in beetroot are beneficial for the liver in many ways. Beetroot juice was studied for its effectiveness in protecting the liver against oxidative stress from carcinogens and cancer causing agents. Researchers suggest that beetroot changes your body’s metabolism for the better when consumed over the long term. Beetroot also offers protection against liver damage.

Grapefruit is a great source of fiber, which promotes regular bowel movement, allowing the body to expel toxins which have been filtered by the liver. Researchers believe that the naringenin antioxidant found in grapefruit helps the liver break down fat. The effects of naringenin trick the liver into fasting mode, causing it to break down fats, instead of carbohydrates, to fulfill energy needs.

Milk thistle is a natural herbal remedy that can be added to herbal tea, smoothies or salads. The antioxidant and anti-inflammatory flavonoid silymarin is hepatoprotective, protecting against toxins and common pain relief drugs that can damage the liver at high doses. Research suggests milk thistle rejuvenates and repairs the liver by helping new cells grow.

This anti-inflammatory and natural healing spice makes for a great cleanse. It has been used to treat liver problems for centuries. Turmeric contains curcumin, which prevents fat from accumulating in the liver. Studies show the potential for turmeric to lower cholesterol and triacylglycerol concentrations in the liver.