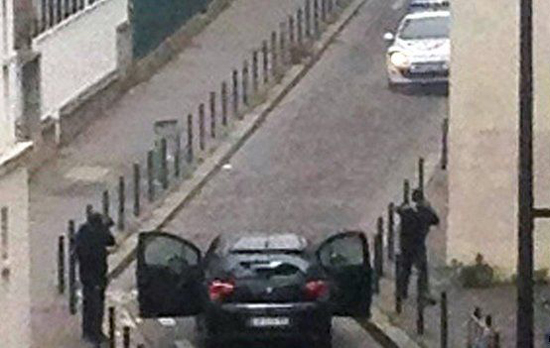 Picture from scene of Charlie Hebdo attack. Have the authorities provide the killers with sophisticated weapons?

Claude Hermant, arrested in the case of the attack on January 7, 2015 against Charlie Hebdo, now involves the State in the preparation of the attack. Hermant, who allegedly sold the weapons that later served Amédy Coulibaly and the Kouachi brothers to commit the attacks, accused three gendarmes and two customs officers of being involved, as well as a major organized crime figure working with the police.

This testimony shattered the official narrative, according to which Islamists prepared alone the attacks that have bloodied France, Belgium and Germany since 2015.

Hermant’s lawyer, Maxime Moulin, does not dispute the fact that the weapons handed over to Hermant, acting under the guise of the Customs intelligence service until 2013 before working for the gendarmerie, reached Coulibaly. The media and established political parties have stifled this fact, as well as the arrest of Hermant because of his relations with Coulibaly after the attacks. The Minister of the Interior in June 2015, Bernard Cazeneuve, even opposed the secret defense to investigations of the links between Hermant and the Islamists.

Moulin filed a complaint at the office of the public prosecutor of Lille on May 2, accusing the Ministry of the Interior of “endangering the life of others”. He explains on behalf of his client: “We demand the end of the defense secret. The roles are reversed, this is the solution we found to have the truth. (…) We want to have access to this info. It is officially requested that the Ministry of the Interior remove the defense of all contact relations (between the gendarmes and Claude Hermant). They are accountable. We want to know what has been treated, transmitted, what has not been treated, and why.”

Hermant’s lawyer says his client acted solely for the interests of the customs and gendarmerie services: “We cannot accept that the gendarmerie works in a borderline manner. When it works, they are happy, and when it does not work, it leaves you alone in a field of ruins. You cannot leave a soldier in the open country.” 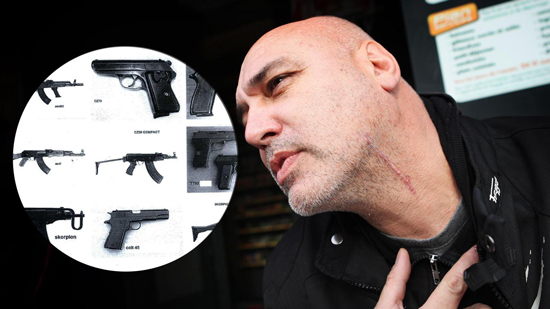 According to Libération, Moulin justifies Hermant’s complaint by relying on “an article by Médiapart published in March 2017: Claude Hermant had warned the gendarmerie that a convoy of arms was passing through a motorway toll between Lille and Paris, but the gendarmerie could only intercept one vehicle in two. The second convoy, warned that the gendarmes were on the spot, managed to avoid them. But these weapons were used by Coulibaly.”

La Voix du Nord published a few excerpts of mails exchanged between Hermant and a gendarme in November 2014: “Hi Claude, we saw with our hierarchy… We are leaving(s) for the two files you presented us (weapons-Charleroi)…”
These emails suggest that Hermant could have received the approval of an intelligence service for his actions in the matter of deliveries of arms to Coulibaly or other Islamists. The Voix du Nord continues: “Imagine that you came across this type of message sent by a gendarme to Claude Hermant on November 21, 2014 at 8:47. That a close friend of the accused certifies that ‘Claude Hermant assured his rear’…”

It is clear that forces much wider than the Islamists alone were anchored in the actions that prepared the attacks. The State’s use of defense secrecy and the deafening silence of the mass media serve to shape a partial and false narrative of the attacks, which incites anti-Muslim racism and which washes the role of the state and the extreme right.

The state of emergency established after the attacks of November 13, 2015 is based on this lie, which the capitalist media does not dispute because it serves as a foundation for bourgeois politics in France. These attacks served as a justification for Holland’s right-wing policy: the state of emergency, the creation of a national guard, the intelligence laws, and the legitimization of the Front National by the invitations of Marine Le Pen at the Elysee.

The Kouachi brothers were monitored closely between 2010 and 2015 and considered extremely dangerous because of their direct contact with Al Qaeda leaders in the Arabian Peninsula. Chérif Kouachi and Amédy Coulibaly have visited Djamel Beghal, a member of Al Qaeda in Algeria, who has been under house arrest in France. 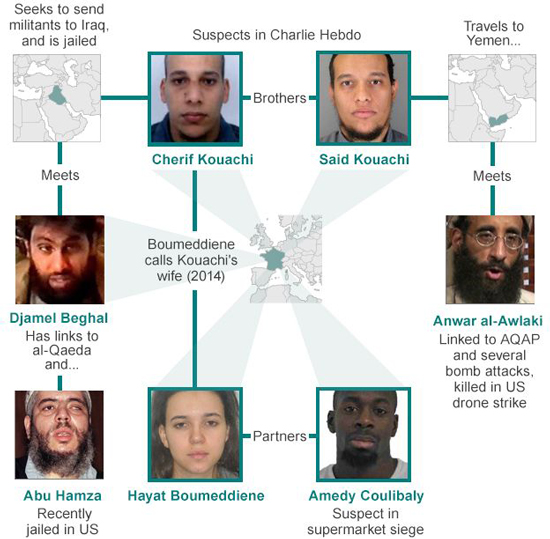 Abaaoud, a leading member of the widely known Islamic State (IS) on Facebook, was able to move freely across Europe and prepare for the attacks of November 13, 2015, without being worried.

Salah Abdeslam, one of the survivors of the November 13 commando, the man called the most wanted in Europe, had been spotted since December 2015 by a policeman from the commune of Mechelen. However, his investigation report was lost by his superiors, and the police arrested Abdeslam only in March 2016.

As for the terrorists who then carried out the attacks on March 22, 2016 in Brussels, they were able to organize the attacks while the Turkish, Israeli and Russian services had warned their European counterparts of their identity and the targets they had chosen.

The treatment of these attacks was manipulated by the media and the political class in order to terrorize the French and to move the political scene farther and farther to the right.

Hermant’s revelations took place in the midst of the presidential elections, a few days after the murder of a policeman by Karim C. sympathizer of the IS. Karim C. had been in prison for attempted murder of police officers in the early 2000s and was known to the police and anti-terror police. As announced by the press, he was kept in detention until recently, and on his release from prison he began again to threaten the police.

It is impossible to conceive how the security and intelligence agencies would have left a person at liberty, except by a conscious decision, knowing that he was going to commit a crime that would serve them politically.

The murder of police officer Xavier Jugelé triggered a security hysteria on the part of the media and political parties as anti-war and anti-austerity sentiment developed among large sections of youths and workers as a result of strikes on May 7 in Syria. Macron, the preferred candidate of the bourgeoisie, declined in the polls in favor of Mélenchon. This attack refocused the right-wing presidential elections, stabilizing Le Pen and Macron in the polls.

The state of emergency is not directed against terrorists but serves to suspend democratic rights, in order to prolong austerity through repression, such as during demonstrations against labor law or arbitrary searches in the suburbs.