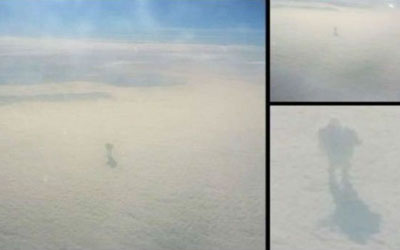 A passenger aboard a European flight captured a stunning picture of what seems to be a humanoid like figure walking on clouds.

Nick O’Donoghue, left the internet stunned when he posted pictures of the figure, in January 2016, which has since gone viral over social media. Mr. O’Donoghue was onboard an Easyjet flight from Austria to Cork, Ireland when fellow passengers got hysterical about the weird phenomenon outside the aircraft window.

First appearing on Joe.ie and later on Reddit, hundreds of online users commented on the picture, with some stating that it resembled The Iron Giant and others comparing the shadow to the cloud men in James and The Giant Peach.

One user wrote: “[It] looks like the Iron Giant”, which was soon backed up by many others, who stated that they had thought the same thing. Awoman replied: “I was gonna say the same thing! Reminds me of the end of the movie.”

One Reddit user claimed that the figure on the clouds resembled the robot from animated movie The Iron Giant.
Mr. O’Donoghue however, told MailOnline Travel that he believes the figure resembled the Michelin man. 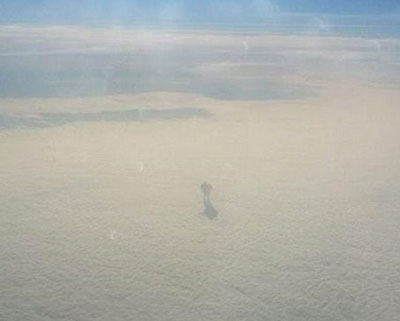 He said: “I was flying back from a work ski trip in Austria, I was on the window seat with two work colleges beside me.

They were talking like crazy and I was gazing out the window, as you do. I could see this figure in the distance in front of us and then as we flew closer this shape appeared.

I asked the ladies beside me to look at it too in case I was seeing things. They too were amazed! I then took some pictures and then the aircraft slowly passed it.

It was in view for about two minutes as it was a good bit away in the distance. To me it looked like the Michelin man but to be honest I have no idea what it was.

Some comments online said it was smoke stacks below and the heat from them pushed up the layer of clouds, but I don’t think so as they looked very close together.

Probably just a funky cloud formation but I’d love for someone who knows about clouds to see it and try and explain.”

This is not the first such appearance in the clouds. In October 2016, thousands of people in China claimed they had seen a “floating city” in the sky.
Residents of Jiangxi and Foshan were stunned when they saw what they thought to be towering sky scrapers appearing from the clouds.

While many believed they had seen parallel universes, weather experts say the phenomenon was down to an optical illusion known as a Fata Morgana.

The Key to Good Luck Is an Open Mind