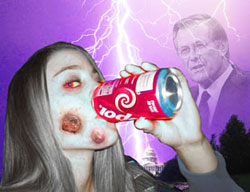 In 2013, The Center for Environmental Health (CEH) went public with test results and allegations that PepsiCo was intentionally covering up the fact that their uber-popular soft drinks contain elevated levels of 4-Methylimidazole (4-MeI), a known carcinogen formed in the manufacturing process of caramel coloring.

PepsiCo, of course, denied these allegations, claiming at first that 4-MeI is safe to drink and that they had furthermore removed this chemical from their products, and has since been fighting to avoid having to put a cancer warning label on their popular Pepsi, Diet Pepsi, and Pepsi One products in California.

Pepsi claims that the 4-MeI chemical is safe, noting that the FDA and other regulatory agencies have not deemed the chemical unsafe. According to USA Today, the Food and Drug Administration says a consumer would have to drink more than 1,000 cans of soda a day to reach the doses administered that have shown links to cancer in rodents. But, after a study on mice and rats linked the coloring chemical to cancer, California added 4-MeI to its list of carcinogens.

A Federal Judge in California has preliminarily approved a settlement in a class action suit against PepsiCo in which lead plaintiff Mary Hall alleges, again, that PepsiCo failed to warn its customers of the potential risks of drinking Pepsi products containing caramel coloring and 4-MeI.

Under the proposed settlement, Pepsi agreed to require its caramel coloring suppliers to meet certain 4-MeI levels in products shipped for sale to the United States, to ensure that the carcinogen’s levels will not exceed 100 parts per billion.

A 2014 Consumer Reports test showed that the 4-MeI in Pepsi exceeded the permitted level of 29 micrograms per bottle or can, which would mean that they were in violation of common law and consumer protection statutes in the state of California. In particular, this violates California’s Proposition 65, which has been in place since 1985, and requires manufacturers to provide consumers with clear warnings when their products will expose them to toxic or cancer-causing chemicals. 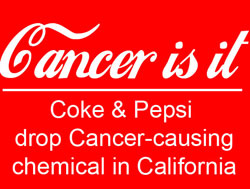 The state’s Office of Environmental Health Hazard Assessment set the cutoff at 29 micrograms because that level creates a risk of cancer of one in 100,000.
Citing a 2013 Mintel and Leatherhead Food Research report, Consumer Reports said that caramel coloring is the world’s most widely used food coloring.

At the time, Pepsi tried to say that because Prop 65 refers to exposure per day rather than exposure per can, and that the average amount of diet soda that its drinkers consume daily is less than a can, there was no need to place a warning on it. Consumer Reports disagreed, however.

“No matter how much consumers drink they don’t expect their beverages to have a potential carcinogen in them. And we don’t think 4-MeI should be in foods at all. Our tests of coke samples show that it is possible to get to much lower levels”, toxicologist Dr. Urvashi Rangan said.

PepsiCo has now agreed to “monitor” the amount of the carcinogenic food coloring in their soft-drinks, which is essentially the same agreement that in 2015 resulted from an injunction filed by CEH. However, this new settlement requires the soda manufacturer to monitor levels of 4-MeI in their products nationwide, not just in California.

The amount of soft drinks Americans consume annually is actually on the decline at present, however the World Health Organization estimates that cancer rates will rise as much as 50% by 2020. Furthermore, recent reports have identified sugar as a top cause of the global cancer epidemic, and much of the water used by soft-drink makers is treated with sodium fluoride, fluorosilicic acid, or sodium fluorosilicate, which have been linked to cancer by the American Cancer Society.

Basically, people are drinking known carcinogens for the cosmetic benefit of having a pretty colored beverage… and PepsiCo is OK with this.

If it has taken this many years and this much public outrage to get the soft drink giant to even “monitor” the levels of carcinogens in this globally popular drink in California, what is Pepsi doing in other countries? Are people around the world taking even heavier doses in places where regulation, oversight and activism is less prominent and effective than it is in California?

Is drinking soda really worth risking cancer and obesity? 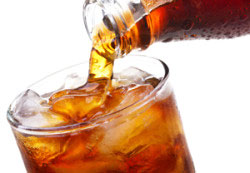 It simply does not make sense for people to expose themselves unnecessarily to an ingredient that merely serves to color their food, and consumers have the right to be aware of what they are putting in their bodies.
The popularity of books like Food Forensics serves to illustrate the growing desire by Americans to know what ingredients their food products contain. The cancer-causing caramel coloring in Pepsi is not the only reason consumers should steer clear of it. Soft drinks are also believed to be behind the USA’s obesity epidemic.

An UCLA study found that adults who consumed one sugary drink such as a soda every day had a 27 percent higher likelihood of being classified as overweight than those who did not drink such beverages.
Moreover, drinking just one soda each day adds up to a total of 39 pounds of sugar each year! That means that regular soda drinkers can cut their risk of obesity and cancer in one fell swoop simply by giving up the habit for good.