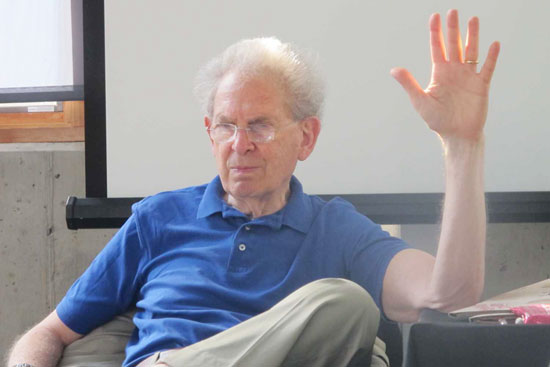 Russell Targ is a physicist and author, a pioneer in the development of the laser and laser applications, and a cofounder of the Stanford Research Institute (SRI) investigation of psychic abilities in the 1970s and 1980s.

SRI is a research and development think tank in Menlo Park, California. Called remote viewing, his work in the psychic area has been published in Nature, The Proceedings of the Institute of Electronic and Electrical Engineers (IEEE), and the Proceedings of the American Association the Advancement of Science (AAAS).

Targ has a bachelor’s degree in physics from Queens College and did his graduate work in physics at Columbia University. He has received two National Aeronautics and Space Administration awards for inventions and contributions to lasers and laser communications. In 1983 and 1984 he accepted invitations to present remote-viewing demonstrations and to address the USSR Academy of Science on this research.

He is author or co-author of nine books dealing with the scientific investigation of psychic abilities and Buddhist approaches to the transformation of consciousness, including Mind Reach: Scientists Look at Psychic Ability (with E. Harold Puthoff, 1977, 2005); Miracles of Mind: Exploring Nonlocal Consciousness and Spiritual Healing (with Jane Katra, 1998); and Limitless Mind: A Guide to Remote Viewing and Transformation of Consciousness (2004).

He also wrote an autobiography, Do You See What I See: Memoirs of a Blind Biker, in 2008. His current book is The Reality of ESP: A Physicist’s Proof of Psychic Abilities.

As a senior staff scientist at Lockheed Missiles and Space Company, Targ developed airborne laser systems for the detection of wind shear and air turbulence. Having retired in 1997, he now writes books on psychic research and teaches remote viewing worldwide.

Below is a planned talk by Targ for TED that was cancelled by TED. Not surprisingly, some of the most interesting TED talks have been cancelled, author Graham Hancock’s “The War on Consciousness” was banned, and so was scientist Rupert Sheldrake’s, titled “The Science Delusion.”

When it comes to topics within the realms of parapsychology, like ESP, they often fiercely oppose the belief systems of many, despite the fact that publications in peer-reviewed scientific literature have examined this topic for more than a century, with some fascinating results.

Obviously there is something to this, otherwise the CIA and other agencies around the world would not devote decades of research to studying this topic in depth.

“In this $25 million program we used ‘remote viewing’ to find a downed Russian bomber in North Africa, for which President Carter commended us. We found a kidnapped US general in Italy, and the kidnap car that snatched Patricia Hearst. We looked in on the US hostages in Iran, and predicted the imminent release, who was soon sent to Germany.

We described a Russian weapons factory in Siberia, leading to a US congressional investigation about weakness in US security, etc. Our scientific findings were published in Nature, The Proc, IEEE, Proc. AAAS, and Proc. American Institute of Physics. I thought a TED audience would find this recently declassified material interesting. And no physics would be harmed in my presentation.”

This includes amazing new data retrieved from recently declassified documents via the Freedom of Information Act, and over 30 interviews with every top player involved and how those discoveries are being used today.

Whether parapsychology is used to find your house keys, make money on Wall Street, read codewords at a secret NSA site, spy on foreign embassies, or find a kidnapped General or a bomber, the possibilities are endless.

Russell Targ’s explained “the evidence for extra sensory perception is overwhelming and shows a talent we all share and deserve to know about, leaves us not just with an understanding of this unique and unsung chapter in U.S. history, but perhaps most importantly a greater understanding of who we are.”

Neuroscientist Explains What Coffee Does To Your Brain – Should We Really Be Drinking It?