Remember when geoengineering was labeled a ‘conspiracy theory’? 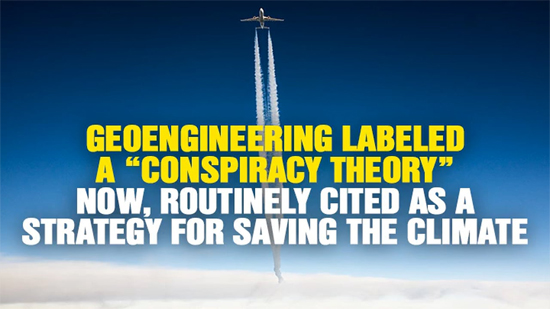 When alternative media sites first started talking about geoengineering several years back, some people accused them of spreading baseless “conspiracy theories.” Fast-forward to 2018, however, and discussion of “chemtrails,” as many people call them, has become mainstream, as studies like this one not only openly admit that the spraying of our skies is, indeed, happening, but further claim that it’s being done to prevent “climate change.”

In this study, scientists from the Potsdam Institute for Climate Impact Research in Germany discuss – as if it’s no big deal – the concept of atmospheric energy technologies that have the capacity to pull carbon dioxide from the atmosphere and sequester it in the ground. Known as bioenergy combined with carbon capture and storage, or BECCS, the idea is to burn trees and other organic matter in order to capture carbon dioxide from the atmosphere, which supposedly leads to a net removal of “damaging” greenhouse gases.

Though the paper doesn’t specifically discuss airplanes lacing the skies with a tapestry of aluminum, barium, and other particulates supposedly designed to block out the sun’s “damaging” rays, it does deal with the issue of intentionally altering climate conditions in order to counter or reverse what some perceive as the damaging effects of global warming – which is, in essence, the foundational concept and alleged purpose behind geoengineering.

This research, however, doesn’t require any reading between the lines. Researchers from Harvard University published a paper last spring discussing “small-scale atmospheric experiments” that they touted as a method of combating climate change.

Professors David Keith and Frank Keutsch reportedly plan at some point in 2018 to launch a high-altitude, gondola-tethered balloon equipped with propellers and sensors. Known as the “StratoCruiser,” this device will “spray a fine mist of materials such as sulfur dioxide, alumina, or calcium carbonate into the stratosphere” for the purpose of “measur[ing] the reflectivity of the particles, the degree to which they disperse or coalesce, and the way they interact with other compounds in the atmosphere.”

During an interview with MIT Technology Review, Keith explained that one of the goals of these experiments is to more intently study what’s known as “solar radiation management,” which is just a fancy way of describing the use of tiny metal particulates to reflect solar radiation back into space, and away from the earth – in order to keep it “cool,” of course. His colleague, Keutsch, actually wrote this in a separate paper, stating that such a process “may cool the planet while simultaneously repairing the ozone layer.”

But wait – isn’t that what Natural News and other independent media outlets have been saying all along? Back in 2016, for instance, NASA actually admitted to putting lithium chemicals in rocket exhaust in order to intentionally disperse it throughout the upper atmosphere.

A paper published in 2003 also speaks of “aerosolized vaccines,” or chemtrail “medicines,” that can be blasted into the sky to quickly “immunize” large populations of people.

In 2008, the globalist group known as the Council on Foreign Relations (CFR) sponsored a symposium in San Diego where aerosol spraying from airplanes was openly discussed. It was specifically mentioned at this event how aluminum can be blasted into the stratosphere to help “shield” the earth from the sun, and thus prevent global warming.

There’s so much evidence out there to suggest that chemtrails are not only real, but also happening on an almost daily basis all around the world. And yet, a quick internet search for chemtrail science or evidence still pulls up all sorts of mainstream propaganda claiming that chemtrails are a wild “conspiracy theory” that people with tinfoil hats are making up simply for attention, or something.

One has to wonder how these same media outlets explain a United States government patent from 1975 for “powdered contrails,” which obviously aren’t the innocuous ice crystals that chemtrail deniers insist are blanketing the skies and blocking out the sun these days. Believe it or not, the word “chemtrails” actually appears in government documents – even though they “don’t exist,” according to the experts.

Believe it or not, a U.S. Air Force Academy (USAF) training manual from 1990 actually contains the word “chemtrails” in its title, with further information inside about atmospheric spraying. More recently, an Environmental Protection Agency (EPA) whistleblower was even fired for trying to raise awareness about how aluminum in atmospheric geoengineering is harming the planet.

“Our government continues to radically ramp up its all out assault on the environment and thus on civilian populations,” comments Dane Wigington, author of How much longer till the breaking point of total collapse? posted on GeoengineeringWatch.org.