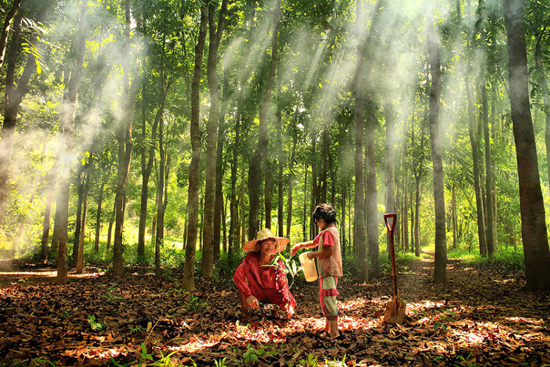 European research from the Max Planck Institute for Human Development in Germany suggests that city dwellers who live near nature experience positive effects on their brains compared to their purely urban counterparts, especially on the amygdala, the brain’s integrative center for emotions, emotional behaviour, and motivation. When we think of stress or fear responses, we should be thinking of the amygdala.

This research should come as no surprise, since the physiological and psychological benefits of nature are well documented. In the article How Walking In Nature Changes The Brain, the study led by Gregory Bratman was explored, that suggested that being in nature can potentially change our brains and positively impact our health: “Researchers conducted a study which asked randomly selected participants to spend 50 minutes walking in either a natural or urban setting, and to submit to a series of psychological assessments before and after the walk. They found that volunteers who walked through a lush, green portion of Stanford campus showed improve cognitive function and mood compared to those who walked near heavy traffic for the same period of time. However, while this study showed that nature could have a positive effect on mental well-being, it did not examine the neurological mechanisms underlying this change.”

Another article, Study Shows What Living In A “Greener” Neighbourhood Can Do For Your Health, also delves deeper into the benefits of living in green spaces:
“Researchers at the University of New Brunswick collected data on 1.3 million non-immigrant Canadian adults living in the 30 largest cities in the country. The data analyzed was dated from 2001-2012, and the researchers measured the amount of greenery around the participants’ houses, from giant trees to tiny shrubs. Their findings suggest that the more greenery people live around, the lower their risk of premature death.”

City dwellers are at higher risk of developing psychiatric illnesses such as depression, anxiety disorders, and schizophrenia than people who live in rural areas, and the amygdala is more active in people who live in cities, since this part of the brain is important in processing stress and reactions to danger.

There are many reasons for this, the most obvious being the noise, pollution, and crowds that come with city living, all of which can factor into chronic stress.
According to the study’s lead author, Simone Kühn, “Research on brain plasticity supports the assumption that the environment can shape brain structure and function. Studies of people in the countryside have already shown that living close to nature is good for their mental health and well-being. We therefore decided to examine city dwellers.”

Kühn and her team looked at 341 adults aged 61 to 82. They asked participants to undergo MRI scans to determine the structure of stress-processing brain regions, particularly the amygdala, and asked them to complete memory and reasoning tests.
They combined the MRI data with geoinformation about participants’ locations in order to better examine the influence that nature has on these brain regions.

The research showed that those who lived in a city but closest to a forest were more likely to have a physiologically healthy amygdala structure and therefore better able to cope with stress. This information was still true even when they factored in other influences like education and income levels.
The team commented that “at the moment it is not possible to determine whether living close to a forest has positive effects on the amygdala, or whether people with a healthier amygdala are more likely to choose to live in an urban area close to a forest”.

Other research has suggested that when we bring ourselves outdoors and place our feet directly on the ground (not concrete), we can reduce our stress levels and potentially treat a number of degenerative diseases.

A study published in the Journal of Environmental and Public Health titled Earthing: Health Implications of Reconnecting the Human Body to the Earth’s Surface Electrons postulates that earthing could represent a potential treatment/solution to a variety of chronic degenerative diseases.

It concluded that simple contact with the Earth, through being either outside barefoot or indoors connected to grounded conductive systems, could serve as a natural and “profoundly effective environmental strategy” against chronic stress, ANS dysfunction, inflammation, pain, poor sleep, disturbed HRV, hyper-coagulable blood, and many common health disorders, including cardiovascular disease.