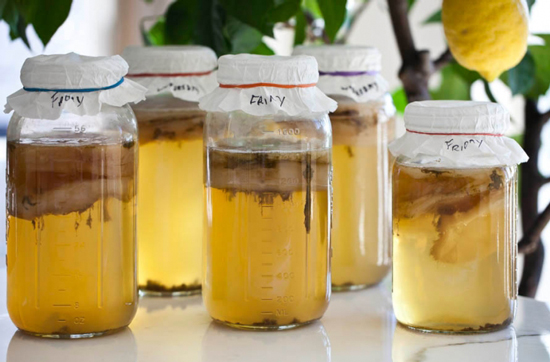 Kombucha is a passion among health food lovers. Now researchers have gathered 75 studies attesting to its proven health properties.

Fermented tea known as kombucha has been rapidly growing in popularity among health food lovers. But it’s actually been around for thousands of years. It originated in China in the third century B.C. Then it made its way to Russia, India, and Japan where it became a staple among Samurai warriors. Today it is also popular in Poland, Germany, Bulgaria, Indonesia and many other cultures.

Kombucha – or “the booch” to its fans – is made from green, black or white tea. It’s fermented for at least a week with sugar and a fungal culture consisting of a mixture of bacteria and yeast. The starter is called a “SCOBY” which is an acronym for “symbiotic colony of bacteria and yeast”.

The culture, also sometimes referred to as the “mother” resembles a light brown, tough, gelatinous disk, which is a living, growing organism. With each batch of the tea, the organism can regenerate and create a new culture called the “baby” which can be shared with a friend much like the sharing of a sour dough starter.

Sometimes called “mushroom tea”, kombucha has been associated with a long list of health benefits. It’s a probiotic drink with helpful bacteria that support digestion and the immune system. It also contains enzymes, amino acids, antioxidants and polyphenols.

But relatively little scientific evidence has confirmed the health claims of traditional cultures drinking the tea. Recently, researchers from the University of Latvia gathered 75 studies attesting to the proven health properties of kombucha.

Here are 18 healthy reasons they suggest to raise a glass of kombucha:

Kombucha contains substantial amounts of glucuronic acid (GA). GA is well known as a detoxicant. In the body it combines with toxins like pharmaceuticals and environmental pollutants. It then converts them into compounds that are soluble and the body can excrete. Drinking kombucha may also help prevent tissues from absorbing industrial toxins in the environment.

Kombucha contains abundant antioxidants including vitamins E, C, beta-carotene, and other carotenoids. Like black tea, kombucha also contains polyphenols and other compounds with antioxidant powers. But because it is fermented, kombucha is much more powerful than plain tea. Its antioxidant activity has been found to be 100 times higher than vitamin C and 25 times higher than vitamin E. For that reason drinking traditional kombucha may help cure chronic illnesses caused by oxidative stress.

Nonsteroidal anti-inflammatory drugs (NSAIDs) are toxic to the gut. They can lead to gastric ulcers. Indomethacin, a popular NSAID, can disrupt blood circulation to the stomach’s mucous membrane. Kombucha has been shown to effectively heal gastric ulceration. The researchers believe the fermented tea protects the mucin content of the stomach. Its antioxidant activity also protects the lining of the gut. Kombucha also reduces gastric acid secretion that can damage the mucous membrane. In fact, kombucha has been found as effective in healing ulcers as prescription omeprazole (brand name Prilosec).

7. Diabetes
Research dating back to 1929 found kombucha can decrease blood sugar levels. More recent animal studies report that kombucha significantly reduces blood sugar levels in diabetic rats. Another study suggested kombucha may be considered a candidate for the treatment and prevention of diabetes.

Kombucha may help eliminate kidney damage caused by environmental pollutants and may be beneficial to patients suffering from renal impairment. Kombucha has also been used to prevent calcification in the kidney and may prevent the formation of kidney stones.

Oxidative stress can damage the lining of blood vessels. That damage is a precursor to atherosclerosis, and a threat to heart health. Antioxidants in kombucha help promote regeneration of cellular walls in blood vessels. 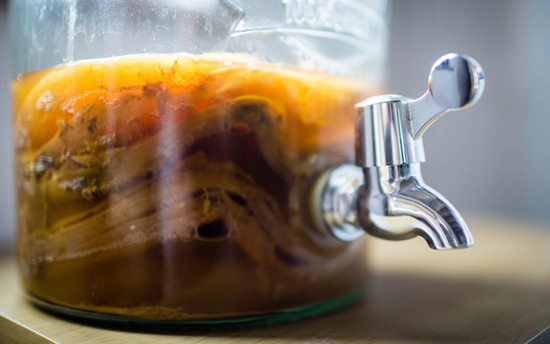 Kombucha has been used to prevent headaches and dizziness caused by hypertension. It’s been recommended for treating high blood pressure.

Kombucha protects against liver toxicity in animals from overdoses of acetaminophen (Tylenol). Researchers suggest it might provide a useful therapy for humans as well.

Kombucha contains several amino acids, methylxanthine alkaloids (caffeine, theophylline, and theobromine), ascorbic acid (vitamin C), and B vitamins (including folic acid-B9), necessary for normal metabolism in the nervous system. It can help with headaches, nervousness, and epilepsy prevention. It may also prevent depression in the elderly.

Daily kombucha may help asthma patients. It contains significant amounts of theophyline, a bronchodilator. The treatment dose of theophyline is 0.18–1.0 g daily. Just one cup of kombucha contains about 1.44 mg.

Glucuronic acid in kombucha can be converted by the body into glucosamine, chondroitin-sulphate, and other polysaccharides and glucoproteins associated with cartilage, collagen, and the fluid that lubricates joints. It may also help relieve arthritis, rheumatism, and gout.

Consumption of kombucha has been associated with lower cancer rates. Researchers believe it increases the immune system’s anticancer defenses. It may prevent cancer proliferation at early stages of tumor growth due to its glucuronic, lactic, and acetic acid content, as well as its antibiotic compounds. It may have anticarcinogenic effects especially for hormone-dependent tumors.
Cell studies suggest it may be useful for prostate cancer treatment and prevention. It’s also been studied as an anticancer agent against human lung, osteosarcoma, and renal cancer cell lines.

How to Enjoy Kombucha at Home

Kombucha is widely available in health food stores. When you buy a bottle you’ll notice a thin layer of the SCOBY at the bottom. The instructions may caution against shaking the contents. That’s because it should be a little effervescent.

Because it’s a fermented food, kombucha can develop an alcohol content that approaches the FDA’s upper limit for a non-alcoholic beverage of 0.5% by volume. Some people report getting a buzz from the drink but others don’t notice any effect at all.

The Latvian researchers note that a series of microbiological and biochemical tests on kombucha have repeatedly found it safe for human consumption. Sally Fallon, author of Nourishing Traditions: The Cookbook that Challenges Politically Correct Nutrition and the Diet Dictocrats, quotes an FDA official as saying that when reasonable care is taken, “you’re more likely to find contamination in a cup of coffee than in a cup of properly prepared kombucha”.

But there have been isolated reports of sickness after drinking kombucha. Alternative health expert Dr. Andrew Weil does not recommend drinking the homemade version for fear of contamination with aspergillus, a toxin-producing yeast which he believes would be risky for those with already compromised immune systems, like AIDS patients and cancer patients, as well as for pregnant and nursing mothers.

What to do? If you are healthy, try the commercial brands for yourself. For beginners, a good brand to try is GT’s Organic Raw Kombucha. The founder claims he began making kombucha in 1995 after his mother successfully used the drink in her battle against breast cancer.

It’s best to use kombucha in moderation to begin (four to eight ounces a day), even though the bottle may recommend a full 16 ounces per day. And at almost four dollars a bottle, many people may want to keep their intake moderate.

Another reason to start slowly is that kombucha has a detoxifying effect. If the liver is not functioning properly, it can be overwhelmed by the toxins being released. This may be why some people report an allergic reaction to the tea. For that reason, some experts recommend drinking plenty of water while taking kombucha to help flush toxins from the body.

If you are tempted to make your own kombucha, educate yourself first and follow instructions carefully, including using clean equipment, correct temperatures and glass containers.

Kombucha is not a drug but a traditional drink with many health-promoting properties. As with all foods, moderation is key. It’s important to listen to your own body to determine whether it is a good choice for you.