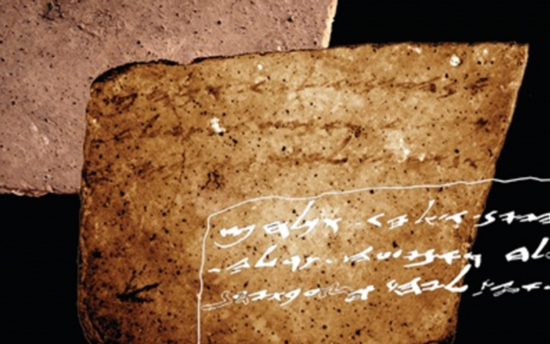 Pottery from almost 3,000 years ago were found to feature previously unseen rare First Temple Hebrew writing; other finds from same era are also to be reinvestigated.

Using a modified household digital camera and a revolutionary new technique for performing multispectral imaging, an interdisciplinary team from Tel Aviv University has discovered never-before-seen Hebrew inscriptions on a First Temple-era shard. The discovery raises the possibility that other “blank” shards from the period may also contain undiscovered texts, and there are now plans for a wider reexamination of all shards from that time period.

A corpus of 91 ink-on-clay shards (or ostraca) written on the eve of the Kingdom of Judah’s destruction by Nebuchadnezzar was unearthed at Tel Arad, west of the Dead Sea, in the 1960s. A remarkable find, the shards were found together on the floor of a single room, and what legible writing was discerned was thoroughly deciphered by top scholars. For the past 50 years, they have been prominently displayed in the Israel Museum.

Containing lists of supplies and orders from military quartermasters, the shards’ value to the study of the Hebrew language, the sociology and the economy of the time period is immeasurable.

With the discovery of previously “invisible” words, and even sentences on the “blank” verso side of one of the first shards to be examined with the new technology, the pieces have become still more important.

It is speculated that the majority of correspondence and literature of this historical period was written on biodegradable papyrus. Therefore, most surviving biblical-period Hebrew inscriptions are on ostraca. Once unearthed, however, ink on clay fades rapidly; many shards previously thought of as “blank” have been summarily disposed of at digs or during artifact recording.

The new, user-friendly multispectral imaging technique, developed by a team of applied mathematicians, archaeologists and physicists – co-directed by archaeology Prof. Israel Finkelstein and physics Prof. Eli Piasetzky – will give these “blank” pottery pieces the chance to reveal any hidden treasures. 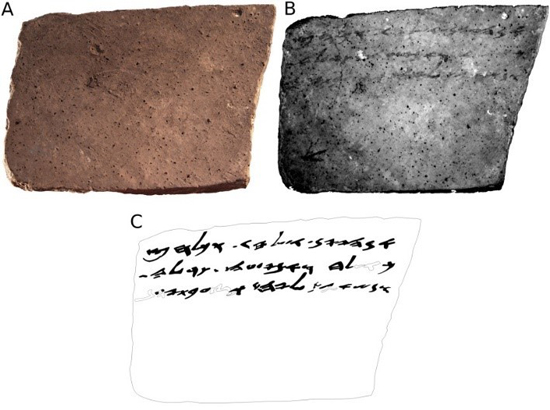 In an article published in 2017 the PLOS One peer-reviewed scientific journal, the team describes the experiment in multispectral (MS) imaging it conducted on an ostracon (Ostracon No. 16, Israel Antiquities Authority number: 1967-990, dated to ca. 600 BCE) from the Tel Arad hoard.

The results of the experimental MS imaging were increased clarity of text on the already studied facing side — and the entirely unintentional discovery of new lines of text, undetectable by the human eye, on the verso. 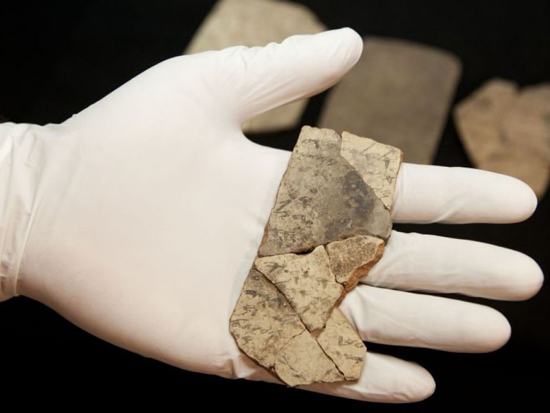 Illustrative image of letters inscribed on pottery, known as ostraca, which were unearthed in the excavation of a fort in Arad, Israel, are seen in the Israel Museum in Jerusalem, April 12, 2016.

The text on the verso side of Ostracon No. 16 was discovered by chance. While photographing the known facing text, Michael Cordonsky, the imaging lab and system manager at the School of Physics and Astronomy, had the idea of flipping the shard – just in case – and found three lines of writing from two and a half millennia ago that would otherwise have been lost to the annals of history.

“We thought we had a great technique, but it turns out that we looked for she-asses and found a kingdom,” said mathematician Barak Sober, alluding to the biblical story in which the future king Saul searches for his father’s donkeys and meets up with the prophet Samuel who anoints him.

Through the new MS imaging, some 45 new characters were added to the facing side of Ostracon No. 16, meaning almost 20 words with a changed reading – half the total. On the unknown verso side, the text bears more than 50 characters, creating 17 new words.

The clay shard was photographed in a dark room with the team’s modified Canon SLR 450D digital camera. Different lenses and filters were used, including a Tamron SP AF90mm F/2.8 Di 1:1 Macro lens. And the internal Canon IR cut filter was removed by Lifepixel and replaced with transparent glass having the same refractive index. 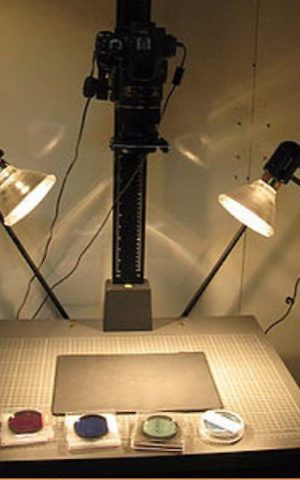 Most cameras institutions purchase to perform the MS imaging cost around $100,000. The Tel Aviv team’s bootlegged version cost well under $5,000.

“This research suggested a simple procedure for acquiring the most legible MS image out of a group of images taken at different wavelengths… Based on these conclusions, a low-cost MS acquisition system was constructed and compared to a more sophisticated and costly MS imaging device. The potential for legibility improvement was found to be comparable in these two systems”.

The Times of Israel spoke with team member and applied mathematician Arie Shaus, whose doctorate deals with the mathematical and statistical techniques used for picture processing. According to Shaus, the modified MS imaging camera used by the interdisciplinary team is a game changer for archaeological studies. 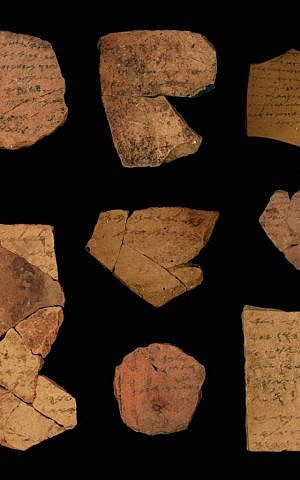 “It means that every university or archaeological dig can build the camera,” Shaus said, and potentially discover previously overlooked inscriptions.

Shaus said the team will continue to photograph other ostraca from this First Temple period; he estimates that the project will be finished by the end of the year. However, noted Shaus, scholars will still be presented with two challenges: ostraca that are outside the borders of Israel; and a new need to re-decipher and reexamine any inscriptions found on previously studied artifacts.

“That is very labor intensive and time consuming,” he said.

For many linguists, however, finding new insights and rare glimpses into First Temple Hebrew will be a labor of love.

Scholarly importance of the new inscriptions

According to the scientific secretary of the Academy of the Hebrew Language, the existent inscriptions found in the Arad pottery hoard are already very important to the study of ancient Hebrew.

The 91-piece trove largely consists of a correspondence between military supply masters, mostly addressed to a person named Elyashiv, who is thought to be the quartermaster in the fortress. Unsurprisingly, most of the language deals with words centering around foodstuffs and shipment orders.

According to the PLOS article, “The inscriptions contain commands regarding supply of commodities (wine, oil and flour) to military units and movement of troops, set against the background of the stormy events in the final years before the fall of Judah. They include orders that came to the fortress of Arad from higher echelons in the Judahite military command system, as well as correspondence with neighboring forts.” 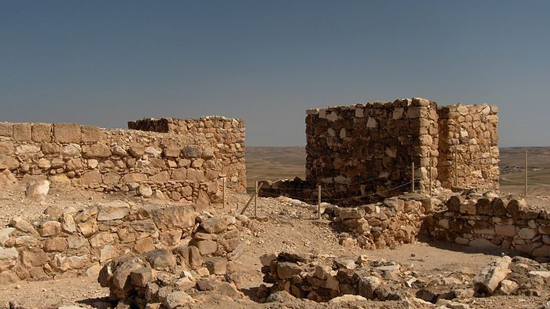 Ostacon No. 16 is a letter sent to Elyashiv from Hananyahu – the team speculates he was a quartermaster in Beersheba – and discusses the transfer of silver. After the MS imaging experiment, newly discovered inscriptions show that Hananyahu also asked for wine.

“While it’s true that many of the ostraca deal with wine or other supplies, there are findings that go well beyond that in terms of their importance. The trove teaches about grammar, vocabulary, on the form and development of the writing, spelling, and also about the Hebrew used at that time,” said Ronit Gadish, the scientific secretary of the Academy of the Hebrew Language.

But they also shed light on the sociology and economy of the era. Through ordered supplies, we know what foodstuffs could be found at that time in Israel and the quantities requested, noted Gadish.

“Every letter, every chance to decipher anything improves our understanding of the text and the history, the economy, and the language of this period,” Gadish added. “It’s amazing because it can suddenly be so easily seen. This is a very important development.”

Shaus told The Times of Israel that, due to the reasonable cost of the imaging, he hopes that all institutions and archaeological digs will implement this technology in the near future as an inseparable tool in their research.

“We want to be sure that the human eye doesn’t overlook any more inscriptions,” said Shaus.

“My heart aches when thinking of all the inscriptions [on finds believed to be blank] that were perhaps thrown into the trash, because it was impossible to discern them in the field,” he added.