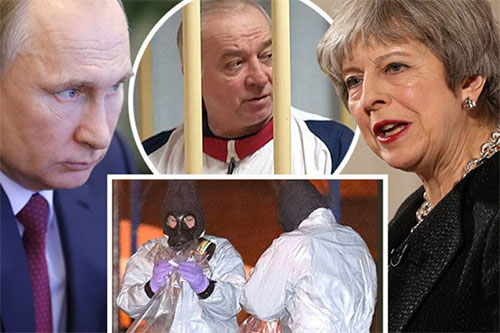 The substance used on Sergei Skripal was an agent called BZ, according to Swiss state Spiez lab, the Russian foreign minister said. The toxin was never produced in Russia, but was in service in the US, UK, and other NATO states.

Sergei Skripal, a former Russian double agent, and his daughter Yulia were poisoned with an incapacitating toxin known as 3-Quinuclidinyl benzilate or BZ, Russian Foreign Minister Sergey Lavrov said, citing the results of the examination conducted by a Swiss chemical lab that worked with the samples that London handed over to the Organization for the Prohibition of the Chemical Weapons (OPCW).

The Swiss center sent the results to the OPCW. However, the UN chemical watchdog limited itself only to confirming the formula of the substance used to poison the Skripals in its final report without mentioning anything about the other facts presented in the Swiss document, the Russian foreign minister added.

He went on to say that Moscow would ask the OPCW about its decision to not include any other information provided by the Swiss in its report. The Swiss center mentioned by Lavrov is the Spiez Laboratory controlled by the Swiss Federal Office for Civil Protection and ultimately by the country’s defense minister. The lab is also an internationally recognized center of excellence in the field of the nuclear, biological, and chemical protection and is one of the five centers permanently authorized by the OPCW.

The Russian foreign minister said that London refused to answer dozens of “very specificˮ questions asked by Moscow about the Salisbury case, as well as to provide any substantial evidence that could shed light on the incident. Instead, the UK accused Russia of failing to answer its own questions, he said, adding that, in fact, London did not ask any questions but wanted Moscow to admit that it was responsible for the delivery of the chemical agent to the UK.

The scandal erupted in early March, when former double agent Sergei Skripal and his daughter Yulia were found in critical condition in the town of Salisbury. Top UK officials almost immediately pinned the blame on Russia.

Moscow believes that the entire Skripal case lacks transparency and that the UK is in fact not interested in an independent inquiry. “We get the impression that the British government is deliberately pursuing the policy of destroying all possible evidence, classifying all remaining materials and making a transparent investigation impossible,ˮ the Russian ambassador to the UK, Alexander Yakovenko, said during a press conference.

More from Fort Russ News:
“Russian Foreign Minister Sergey Lavrov stated: «Based on the results of the investigation, traces of the toxic chemical BZ and its precursors, related to chemical weapons of the second category under the Chemical Weapons Convention, were found in the samples. BZ is a nerve gas that temporarily puts a person out of action. The effect is achieved within 30-50 minutes and lasts for up to four days.»

Police officers are preparing the material while the OPCW (Prohibition of Chemical Weapons) inspectors are working on the incident surrounding former Russian agent Sergei Skripal in Salisbury.

«Of course, if the OPCW rejects the findings of the Spiez Laboratory, it will be interesting to hear the explanations,» said the Foreign Minister.

Previously, OPCW experts found that the Skripal poisoning used a high purity, toxic chemical, but did not say who was behind the incident.ˮ

From the description of its effects, it sounds like a match for the Skripals’ condition: “temporarily put out of actionˮ.

The Western media is deathly silent about this inconvenient fact.