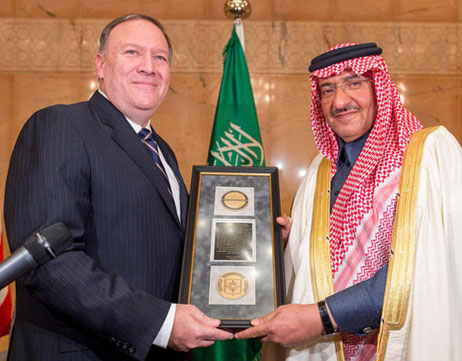 The CIA has come under fire after awarding a Saudi Arabia official connected to the 9/11 terror attacks an award for “fighting terrorism”.

Named for the former Director of Central Intelligence under Bill Clinton and George W. Bush, the George Tenet award recognized the Saudi royal’s intelligence work against terrorism and his contributions to peace and security.

Tenet served as Director of Central Intelligence from July 1997 to July 2004. In 2015, a CIA report was declassified, slamming Tenet in particular for failing to thwart Osama bin Laden despite years of warnings and threats from al Qaeda, which ultimately resulted in the 9/11 attacks.

“The Kingdom has been keen to combat terrorism based on its conviction that terrorism has no identity and no religion, and from its belief that the terrorists are committing these acts stemming from their deviant ideologies and evil thought,” Arab news quoted bin Nayef as saying after receiving the award. “All negative religious, political and social ideologies that use religion as a tool throughout human history do not reflect the absolute truth about religion.”

The prince also said the award recognized the Saudi kingdom’s anti-terrorism efforts under King Salman bin Abdulaziz Al Saud, and commended Saudis working in security agencies as well as the Saudi people for their work to combat terrorism.

Bin Nayef highlighted the fact that the kingdom had successfully prevented several terror plots, including ones against friendly countries, and described the US-Saudi relationship as “strong and historic,” saying nothing would come between them or damage their ties.

“Combatting terrorism requires a joint international effort at all levels; financially, intellectually, militarily and through the media,” he said. “This should be coordinated and conducted in accordance with the UN’s covenants and laws including particularly the principle of sovereign equality.”

Of the 19 suspected 9/11 hijackers, 15 of them were from Saudi Arabia, according to the CIA. In 2015, one of the alleged 9/11 hijackers, Zacarias Moussaoui, claimed several members of the Saudi royal family had been listed as al Qaeda donors in the database he worked on under orders of Osama bin Laden, CNN reports.

Families of the victims of 9/11 have brought a lawsuit against the Saudi Kingdom. The Justice Against Sponsors of Terrorism Act was passed in September 2016, and allows US citizens to sue foreign countries for terrorism.

WikiLeaks cables from the US State Department from 2009 revealed that “donors in Saudi Arabia constitute the most significant source of funding to Sunni terrorist groups worldwide.”

“Saudi Arabia remains a critical financial support base for al-Qaeda, the Taliban, Lashkar-e-Taiba, and other terrorist groups,” the cable continues.

Saudi Arabia has also been accused of funding extremists in Syria, The Independent reports. In a 2014 email released by WikiLeaks in October 2016, Hillary Clinton allegedly wrote about Saudi Arabia’s funding of Islamic State:

“While this military/paramilitary operation is moving forward, we need to use our diplomatic and more traditional intelligence assets to bring pressure on the governments of Qatar and Saudi Arabia, which are providing clandestine financial and logistic support to ISIL and other radical Sunni groups in the region.”

Accepting the Tenet award, bin Nayef pointed to the dangers the Saudi Kingdom faces.
“We are surrounded by areas of conflict, and we were the first affected by terrorism from various sources, but we are equipped to combat terror in any place and under any circumstances,” the prince said.