The Palestinian Authority has led an international outcry against Israel’s decision to retroactively legalize 4,000 Jewish homes, illegally constructed in the West Bank.

“This is an escalation that would only lead to more instability and chaos” warned Nabil Abu Rdeneh, spokesman for the Palestinian president, Mahmoud Abbas.

Passed by 60 votes to 52 in the Knesset in February (2017), the law forces the Arab owners of the land on which Israeli settlements have been built without permission, to either accept monetary compensation or another piece of land in exchange for their own.

Refusing to sell is not an option.
Abu Rdeneh said that the law contravened last December’s unanimously-approved UN Security Council resolution which declared that settlement construction “constitutes a flagrant violation under international law.”

Fatah, the Palestinian Authority’s ruling party, has also called for the International Criminal Court, which has already started a preliminary investigation over Israel’s actions in the region, to formally charge Israel following the vote. 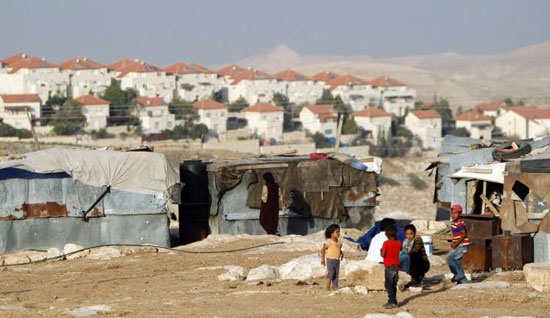 “If the White House, the ICC, the EU, and the international community generally do not hold Israel accountable,… the leadership will not accept any blame for steps it will take to defend Palestinian people’s rights” Palestinian Foreign Minister Riyad al-Maliki said in an interview with the official Palestinian Authority radio station.

The UN, the EU, individual states, and activist organizations have condemned the decision, which came after heated exchanges in the Knesset, and which has been widely opposed in Israel itself.

“The Secretary-General deeply regrets the adoption of the bill… This bill is in contravention of international law and will have far-reaching legal consequences for Israel” Stephane Dujarric, spokesman for United Nations Secretary-General Antonio Guterres, said in a statement.

“The bill further entrenches the current reality in the West Bank of de facto permanent occupation where Israeli settlers and Palestinians living in the same territory are subject to separate and unequal systems of laws, rules and services” said Human Rights Watch in a statement.

“The law constitutes a blow to the two-state solution” said French Foreign Minister Jean Marc Ayrault. “This law, in particular, perpetuates the existence of dozens of settlements and outposts and gives them a legal basis for future development.”

“As a longstanding friend of Israel, I condemn the passing of the Land Regularisation Bill by the Knesset, which damages Israel’s standing with its international partners” said Tobias Ellwood, the UK minister for the Middle East.
Washington, which has signaled a new-found commitment to its alliance with Israel following the election of Donald Trump, said that it will not comment “until the relevant [Israeli] court ruling”.

Israeli legal experts expect the law to be struck down by the Supreme Court of Israel, as it legislates over people – Palestinians – who have no representation in the political system.

The law was pushed forward by the minority Jewish Home party, which has seen its surging support in the polls and was ambivalently treated by Prime Minister Benjamin Netanyahu, who is broadly in favor of settlements, but did not want to risk sparking a storm of international condemnation.

With Jewish Home demanding the construction of thousands of new settlements in the West Bank, even the White House has warned its ally that while existing Israeli homes do not impede peace negotiations, a new round of construction in the West Bank “may not be helpful”.