It’s no secret that smoking cigarettes is bad for our health, but what does it do to the environment? We focus so much on how different substances and foods affect our bodies, which is extremely important, but is it not equally as important to develop an understanding of how these things affect the Earth?

The health effects of smoking kills an astonishing 7 million people per year, costing $1.4 trillion in healthcare expenses and lost productivity, but how does it affect the trees, our land, and other valuable resources? Tobacco cultivation impacts the planet in many ways, and although it’s crucial that we acknowledge the negative effects it has on our bodies, it’s important that we study how it affects the Earth as well.

The World Health Organization (WHO) recently conducted a study on tobacco and its environmental impacts, taking into account not only the financial costs, but also the cost to the environment in terms of deforestation, pollution, and littering.

Details of the Study

Not only does tobacco farming require significant land usage, but it also contributes to significant land degradation because it’s often grown as a monocrop. A monocrop, which is a single uniform crop that’s grown without being rotated with other crops, can lead to a decline in biodiversity and can greatly impact population dynamics and ecosystem roles.

“Tobacco also takes away a lot of nutrients from the soil and requires massive amounts of fertilizer, a process that leads to degradation of the land and desertification, with negative consequences for biodiversity and wildlife”, Dr. Armando Peruga, who was involved with the WHO study, explained.

As one of the largest producers of litter in the world, the tobacco industry, from production to consumption, expends a significant amount of resources and is responsible for releasing harmful chemicals into the soil and waterways.

Oddly enough, tobacco requires a large amount of wood to produce, so much so that it’s a large contributor to deforestation. Approximately 11.4 million metric tons of wood are required per year for curing, the drying of tobacco leaves, which means that every 300 cigarettes produced require 1 tree.

The WHO report noted that in 2012, it was estimated that about 967 million daily smokers were responsible for consuming approximately 6.25 trillion cigarettes globally.

As Dr. Peruga explains, “That means about 6,000 metric tons of formaldehyde and 47,000 metric tons of nicotine are released into the environment.”
In addition, guess what the most common type of litter is? Cigarettes, and a shocking two-thirds of each cigarette ends up being littered. Though many may argue that they’re better off being chucked on the ground than smoked, the underlying issue is that we shouldn’t be smoking cigarettes anyway. They are neither better off being littered nor being smoked because neither is a good option. 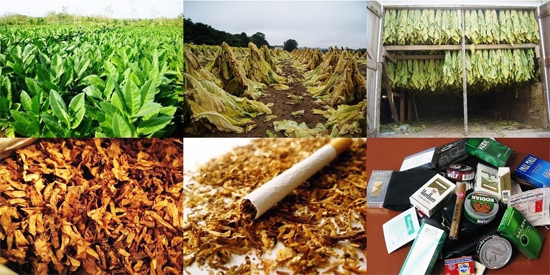 Cigarette butts are not biodegradable whatsoever. The WHO estimated that cigarette butts represent as much as 40% of all items picked up during coastal and urban clean-ups. That’s not even including the two million tons of paper, foil, ink, and glue that are used within cigarette packaging.

Although smoking cigarettes is no longer as normalized and accepted as it once was, and even the packaging now carries warning labels, there are still trillions of cigarettes smoked every year. Not only is this a health issue, but, as this report reveals, an environmental one, too.

Our bodies are our homes; they’re the vessels we use to explore this life. Without a healthy body, you cannot live, which is why it’s crucial to take care of it. However, the Earth is our home as well, and we cannot live on this planet if we destroy it.
Even if you don’t care about the impact smoking will have on your body, take a moment to reflect on how tobacco farming and cigarette production impacts the environment and how that will affect future generations.

Want to live to 100? Eat right, exercise, be social (in real life), stay positive, and make love a lot