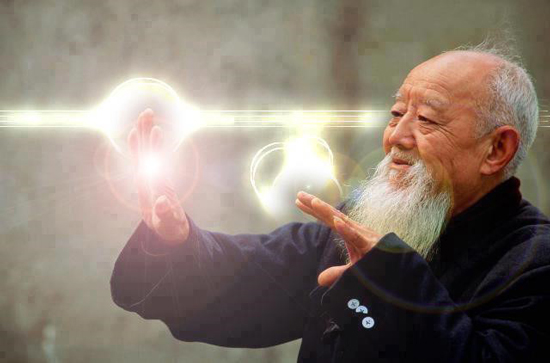 Human beings have superhuman, Jedi-like, psychic and physical powers. The CIA knows this, and we often see stories of amazing individuals who are capable of unbelievable feats of mind, body and spirit. This is built into the 99.9% part of our DNA that we all share, yet so few of us are fortunate enough to grow up in an environment where these abilities are challenged and developed from early on, and skepticism of our infinite potential is too common.

The world of Chinese martial arts is where much of this type of magic happens, and masters who’ve spent their entire lives cultivating the body’s biophysical and spiritual energy systems are legendary for feats such as healing people with their hands or starting fires with their palms. Remarkably, Qi Gong Master Kanzawa Sensei is famous for being able to put wild animals to sleep by subtly manipulating the energy fields around them with his hands.

“Qi, which is pronounced Ki in the Japanese arts, is the Chinese word for energy, and pertains to all forms of energy in the universe. In martial arts and Qi Gong, it specifically refers to human Qi, the bioenergy or life force within every cell of the human body.” – Dr. Yang Jwing-Ming

Through a lifetime of practicing specific forms, drills, exercises, meditations and other esoteric methods which strengthen and purify the energetic centers of the body, true masters of Tai Chi can develop very refined and potent internal energy which be visibly demonstrated in remarkable ways.

In the following video, a master of Tai Chi is seen using physical movement in coordination energetic movement to jar and repel younger students, forcefully throwing them backwards and off-balance with very small movements of his body.

His actions, though subtle in appearance, have a disproportional effect on his opponents. To the skeptic, this may seem unbelievable, but while charlatans do exist, this demonstration is authentic.

For those who’ve been in the presence of genuine Masters of Qi, and have practiced Tai Chi or other Chinese internal martial arts, this is quite real and very possible.

Lower dan tien is the base foundation of the body’s energy structure, acting as the root, or grounding center, and as well as being the physical center of the human body, this is where the development of powers such as these begins.

Dan tien literally means Field of Elixir. The locations in the body which are able to store and generate Qi (elixir) in the body are the Upper, Middle and Lower Dan Tien which are located, respectively, between the eyebrows, at the solar plexus, and a few inches below the navel (Dr. Yang, The Root of Chinese Qigong: Secrets of Health, Longevity & Enlightenment).

Beyond basic training of dan tien, there are an almost infinite number of techniques which can be practiced, such as Fah Jing, Hsing Ie, and Ba Gua Zhong, all of which are nuanced means of developing explosive energy, deeply rooted balance, and in intense mind-body connection.

Describing the process of how such remarkable energy can be created so quickly, renowned Kung Fu, Tai Chi and Qi Gong master, Dr. Jwing-Ming Yang remarks: “Theoretically, in order to activate the muscles to generate force or power, the mind must lead the Qi to the area where the muscles should be energized. For example, when you push a car, you must first generate an idea, and from this mind, an electromotive force (EMF) is generated. From this EMF the Qi is led to the muscles for energization. Through the nervous system (a highly electrically conductive system) the muscles are stimulated and contract, thereby generating action.”

In layman’s terms, the human body can be trained to operate as a directed energy weapon, as is demonstrated in the video above.

The mind is capable of becoming just as rigid as the body, but anyone can develop their internal energy system and enhance their Qi to improve their life. The fundamentals of Qi training are easy enough for anyone and are outlined in five basic principles by Dr. Yang: strength and flexibility, the breath, the mind, the energetic system, and the spirit.

To conclude, here are the wise words of Nikola Tesla: “The day science begins to study non-physical phenomena, it will make more progress in one decade than in all the previous centuries of its existence. To understand the true nature of the universe, one must think it terms of energy, frequency and vibration.”