The Ancient Tibetan practice for Health and Vitality


How ten minutes a day can transform your life 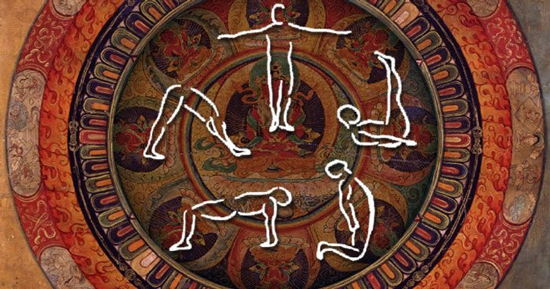 The Five Tibetans or the Five Rites of Rejuvenation is a system believed to be Tibetan Yoga exercises over 2,500 years old. You flow through the five exercises almost in a meditative dance. Each exercise stimulates a particular CHAKRA or hormonal system and revitalizes certain organs, so that the five rites together form a complete workout for the body as a whole.

This series of movements also known as “The fountain of youth” are credited with the ability to heal the body, balance the CHAKRA-s and reverse the ageing process in just ten minutes a day.

According to legend, a British explorer learned the rites in a Himalayan monastery from Tibetan monks who had excellent health despite their advanced age. Some skeptics cast doubt upon the origins of the practice, but no matter the exact source, there is no uncertainty about the great health benefits of the practice. Peter Kelder first publicized the Tibetan Rites in 1939 in a publication, The Eye of Revelation. 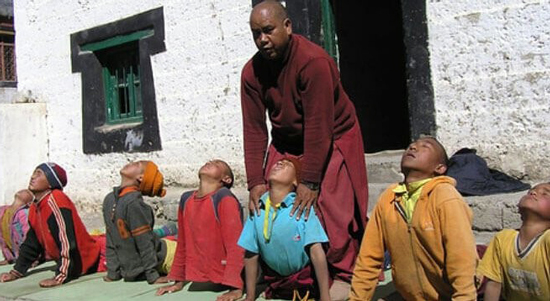 The sequence was later popularized through a book, The Five Tibetans, written by yoga teacher Chris Kilham, who says we will never know their true origins: “Perhaps they come from Nepal or Northern India… As the story has it, they were shared by Tibetan lamas; beyond that I know nothing of their history. Personally, I think these exercises are most likely Tibetan in origin. The issue at hand, though, is not the lineage of the Five Tibetans. The point is their immense potential value for those who will clear 10 minutes a day to practice.”

Yoga teachers are in agreement, the sequence is a simple yet amazingly powerful one that creates a dynamic energetic effect in the body, increasing the flow of PRANA or chi up the spine and through the CHAKRA-s, energizing every cell in your body.

Turning back the clock 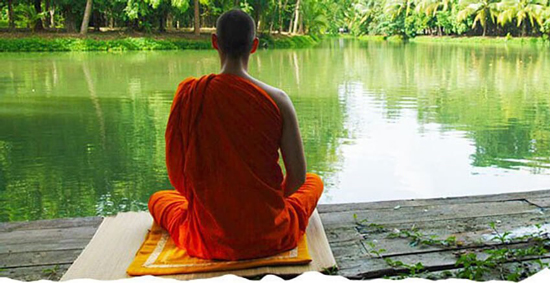 According to the Tibetan lamas, the only difference between youth and old age is the spin rate of the CHAKRA-s (the body’s seven major energy centers).This specific routine is said by lamas to stimulate all seven CHAKRA-s to spin rapidly at the same rate. They believe that if any one of the CHAKRA-s is blocked and its natural spin rate slowed, then vital life energy will be unable to circulate and so ageing and illness will set in.

The Five Tibetans are called the rites of rejuvenation because the lamas say the ageing process is stopped by the unblocking and activation of the spinning of the CHAKRA-s due to this sequence. Recent medical research has uncovered convincing evidence that the ageing process is hormone-regulated. The sequence also normalizes hormonal imbalances in the body which also hold the key to lasting youth, vitality and wellbeing.

Tibetan monks had excellent health despite their advanced age

As simple as The Five Tibetans may seem, they have a profound effect on the energy and CHAKRA system of the body, stimulating the energy of the CHAKRA-s in the same way as switching on a light switch sets a flow of electrical energy. “The Five Tibetans is simple, practical, effective and certainly mind/body altering. If you would love to become rejuvenated, remain calm, feel more vitality, be more flexible and simply look your absolute best, then now there is a new way to experience a greater state of wellbeing that takes just minutes a day, but lasts a lifetime” says Dr. John F. Demartini.

How to practice The Five Tibetans

The Five Tibetans have similarities to some traditional spiritual practices. Tibetan 1 is basically Sufi whirling. Tibetan 2 comes from yoga. Also Tibetan 3, which is essentially the camel pose. Tibetan 4 is like an upward table, and Tibetan 5 is a smooth flow of up dog and down dog.

Stand straight with arms strong, outstretched and horizontal with the shoulders. Now spin around in a clockwise direction until you become slightly dizzy. You can employ a ballet-like technique of keeping your eyes on one spot and then returning to that spot when you turn your head in a full revolution. There is only one caution: you must turn from left to right.

Breathing: Inhale and exhale deeply as you do the spins. 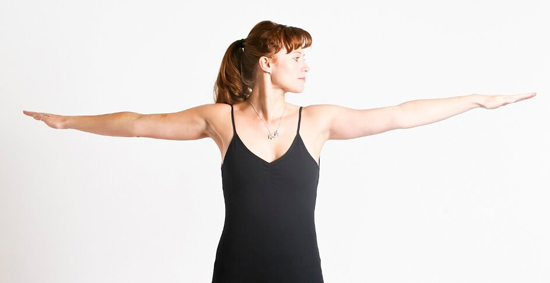 Lie down full length on the floor or bed. Place the hands flat down alongside of the hips. Fingers should be kept close together with the finger-tips of each hand turned slightly toward one another. Raise the feet until the legs are straight up. If possible, let the feet extend back a bit over the body toward the head, but do not let the knees bend. Hold this position for a moment or two and then slowly lower the feet to the floor, and for the next several moments allow all of the muscles in the entire body to relax completely. Then perform the movements all over again. For greater core strength activation you can lower the legs without touching the floor and then using your belly and your in breath, raise the legs up, in a continuous cycle. Be sure to breath out as you lower the legs. An easier version is to have your hands underneath the buttocks and a more challenging version is to have the arms stretched above the head as you raise your legs. 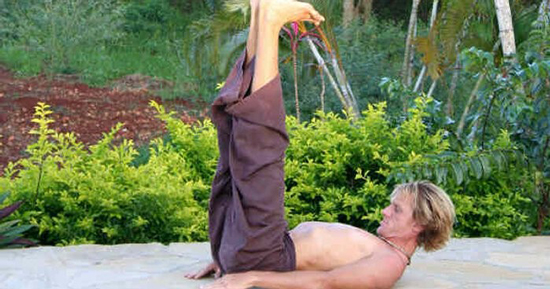 Kneel on the floor with the body straight. The hands should be placed on the backs of your thigh muscles. Incline the head and neck forward, tucking your chin in against your chest. Then fold the head and neck backward, arching the spine. Your toes should be curled under through this exercise. As you arch, you will brace your arms and hands against the thighs for support. After the arching return your body to an straight position and begin the rite all over again.

Breathing: Inhale as you arch the spine and exhale as you return to a straight position. 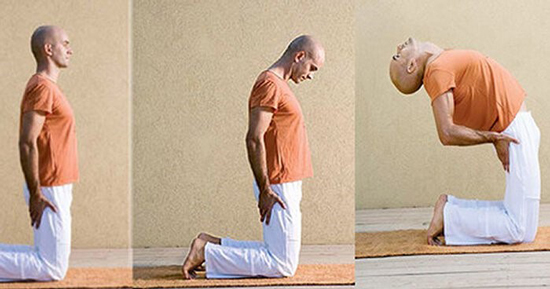 Sit straight on the floor with your feet stretched out in front of you. The legs must be perfectly straight, with the backs of the knees well down or close to the floor. Place the hands flat on the rug, fingers together, and the hands pointing outward slightly. Chin should be on chest and the head forward. Now gently raise the body on an in breath, using your core strength of your belly to lift the pelvis, and at the same time bend the knees so that the legs from the knees down are practically straight up and down like an upward table. The arms, too, will also be vertical while the body from shoulders to knees will be horizontal. As the body is raised upward allow the head gently to fall backward so that the head hangs backward as far as possible when the body is fully horizontal. Hold this position for a few moments, return to first position on the out breath, and relax for a few moments before performing the Rite again. When the body is pressed up to complete horizontal position, you can tense every muscle in the body.

Breathing: Breathe in as you raise up, hold your breath as you tense the muscles, and breathe out fully as you come down. 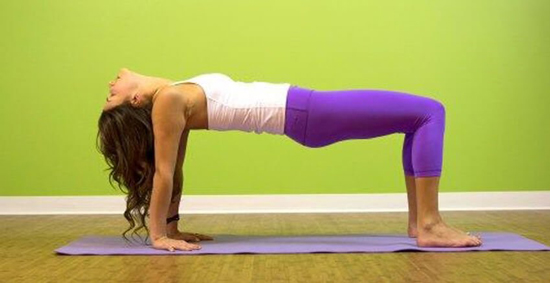 Place the hands on the floor about two feet apart. Then, with the legs stretched out to the rear with the feet also about two feet apart in a downward dog, push the body, and especially the hips, up as far as possible, rising on the toes and hands. At the same time the head should be brought so far down that the chin comes up against the chest. Next, allow the body to come slowly down to a “sagging” position in an upward dog, with only the toes on the floor. Bring the head up, causing it to be drawn as far back as possible. The muscles should be tensed for a moment when the body is at the highest point, and again at the lowest point. Be sure not to strain the lower back, by bringing strong flowing movement to the upper shoulders. Those with lower back injuries can bend the legs as they go into upward dog.

Breathing: Breathe in deeply as you raise the body, and exhale fully as you lower the body down. 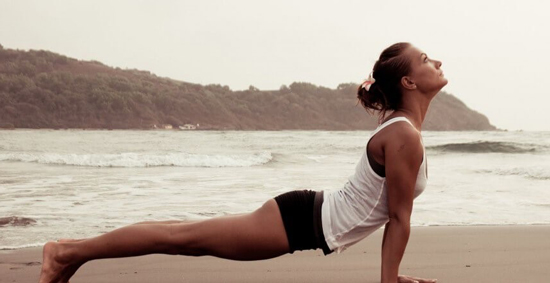 As with all yoga practice, it is important to synchronize your breath with the movement. It’s best to do the exercises in the morning because they get your energy going. But it’s highly likely you will fall in love with the sequence and want to repeat it during the day. To begin with it is best to complete five to seven repetitions of each pose every day and to work up to 21 repetitions of each of the exercises. Usually this takes about 10-12 weeks.

A lot of people are keen to reach 21 repetitions quickly, but it is best to gradually increase the repetitions. The recommended slow build up process allows your body to develop a strong foundation upon which to improve your flexibility. And it also is important due to the effects of the poses themselves. They can initiate many transformations in your body’s energy and balance systems. Although this varies from person to person, it is generally best to allow your body time to adjust.

It’s important to pay attention to what your body is telling you and not to strain or force any position that causes pain. There is also a simple and adapted version of The Five Tibetans for those who have injuries or cannot perform the sequence.

When you make this sequence part of your daily practice, you can experience an overall improvement in your health and wellbeing and perhaps the most important benefit is a dramatic increase in your levels of energy. Other great benefits are a greater resilience to stress and the ability to stay centered. As with all yoga practice greater flexibility in body and mind are usual. Most people report a more focused and purposeful mind and greater awareness, which then creates a happier and more fulfilling life. This sequence really improves the quality of your life. 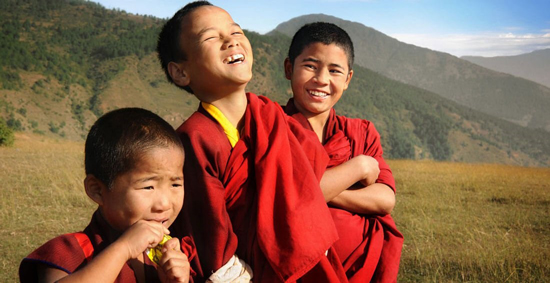 A complete and balanced practice

One of the great things about The Five Tibetans is that it is a quick and simple practice that can be done by anyone, regardless of age or fitness levels. It is a wonderfully simple ten-minute routine that can easily be slotted into your daily life, yet will have major spin offs in all areas. It’s free, and it’s yours. A self-empowering practice you can do on your own anywhere and at any time! The Five Tibetans strengthens and stretches all the main muscles in the body. Just as Sun Salutations make up a complete sequence, they are also a complete and balanced practice.