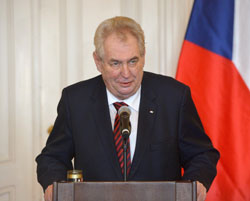 “Nobody officially invited the United States to Syria. And if their mission fails, that will be their own fault” Czech President said in an interview with local media, Russia’s Sputnik news agency reported on October 8, 2016.

Since 2014, the US and dozens of its allies have been pounding Syria and Iraq with the alleged aim of uprooting the Takfiri terror group of Daesh. The campaign, which comes without the Syrian government’s approval or a UN mandate, has done little to eliminate the terror group. The air raids have, on several occasions, targeted Syrian civilians and infrastructure.

The Czech head of state further said any ceasefire in Syria could only be concluded with “moderate opposition” but there is no such group in the Arab state. Only radical groups are currently operating in the Arab country, added the Czech president.

A US- and Russia-brokered ceasefire in Syria ended in September 2016. It had ushered in several days of relative calm, but violence began to creep back when a US-led airstrike killed more than 80 Syrian soldiers in the east. The deadly air raid helped Daesh terrorists make some gains there.

The US and its allies have been supporting what they call “moderate opposition” in Syria, but Damascus says any party that takes up arms against the nation is a terrorist and cannot be called moderate.

Zaman also stressed that the Russian anti-terror campaign in Syria was legitimate as it was the Syrian government that asked Moscow for assistance. At Damascus’ request, Russian airpower has been backing up the Syrian military’s anti-terrorist operations since September 2016. The support campaign has proven vital in the Syrian army’s counter-terrorism offensives.