The End Of The (Petro)Dollar: What The Federal Reserve Doesn’t Want You To Know

The United States’ ability to maintain its influence over the rest of the world has been slowly diminishing. Since the petrodollar was established in 1971, U.S. currency has monopolized international trade through oil deals with the Organization of the Petroleum Exporting Countries (OPEC) and continuous military interventions. 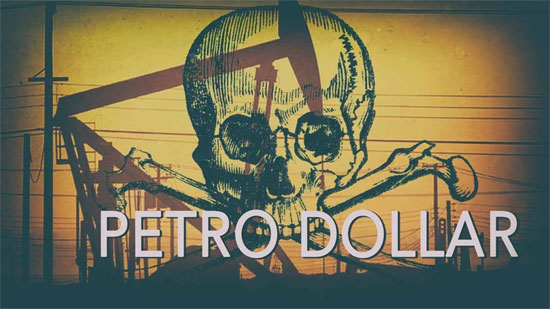 There is, however, growing opposition to the American standard, and it gained more support recently when several Gulf states suddenly blockaded Qatar, which they accused of funding terrorism.

Despite the mainstream narrative, there are several other reasons why Qatar is in the crosshairs. In 2015 and 2016, it conducted over $86 billion worth of transactions in Chinese yuan and has signed other agreements with China that encourage further economic cooperation.

Meanwhile, uncontrollable debt and political divisions in the United States are clear signs of vulnerability. The Chinese and Russians proactively set up alternative financial systems for countries looking to distance themselves from the Federal Reserve.

After the IMF accepted the yuan into its basket of reserve currencies in October of 2016, investors and economists finally started to pay attention. The economic power held by the Federal Reserve has been key in financing the American empire, but geopolitical changes are happening fast. The United States’ reputation has been tarnished by decades of undeclared wars, mass surveillance, and catastrophic foreign policy.

One of America’s best remaining assets is its military strength, but it’s useless without a strong economy to fund it. Rival coalitions like the BRICS nations aren’t challenging the established order head on and are instead opting to undermine its financial support.

Qatar was the latest country to take steps to bypass the U.S. dollar. Russia made headlines in 2016 when they started accepting payments in yuan and took over as China’s largest oil partner, stealing a huge market share from Saudi Arabia in the process.

Iran also dropped the dollar earlier in 2017 in response to President Trump’s travel ban. As the tide continues to turn against the petrodollar, eventually even our allies will start to question what best serves their own interests.

Many E.U. member states are clashing with the unelected leadership in Brussels over immigration, terrorism, and austerity measures. If no solutions are found and things deteriorate, other countries could potentially follow the U.K.’s lead and vote to leave, as well. It is starting to become obvious that countries in Eastern Europe will look to the East to get the resources their economies need.

China, Russia, and India are all ahead of the curve and started stockpiling gold years ago. They recognize that hard assets will be the measure of true wealth in the near future, not fiat money. The historic hyperinflation that has occurred in these countries solidified the importance of precious metals in their monetary systems.

Unfortunately, most Americans are ignorant of the past and will likely embrace more government bailouts and money printing when faced with the next recession. Even Fed officials have admitted that more quantitative easing is likely the only path going forward.

Several renowned investors have warned about this ongoing shift of economic power from West to East, but bureaucrats and central bankers refuse to admit how serious things could get. The impact on the average person could be devastating if they are not properly educated and prepared for the fallout.

Economist and author James Rickards summarized why China and Russia are so interested in acquiring precious metals:

“They are stuck with their dollars. They fear, rightly, that the US will inflate its way out of its $19 trillion mountain of debt.

China’s solution is to buy gold. If dollar inflation emerges, China’s Treasury holdings will devalue, but the dollar price of its gold will soar. A large gold reserve is a prudent diversification.

Russia’s motives are geopolitical. Gold is the model XXI century weapon for financial wars. The US controls dollar payments systems and, with help from European allies, can eject adversaries from the international payments system called Swift.

Gold is immune to such assaults. Physical gold in your custody cannot be hacked, erased, or frozen. Moving gold is a simple way for Russia to settle accounts without US interference.”

Mainstream pundits will continue to distract the public with the same optimistic talking points, but taking advantage of this calm before the storm is important. As this transition takes place, central bankers will sacrifice anything and everything to keep their Ponzi scheme going.

Only individuals can take the initiative to protect themselves and be able to help others who won’t be as lucky. Those who embrace sound money and cryptocurrencies will thrive in this new competitive global economy, but if America fails to adapt, the same fiat system that gave it power will drag it into poverty.