The Main Theories of Emotions

Why do we experience emotions? What kind of processes happen in our brains and our bodies for emotions to occur? In this article, we’ll discuss some of the most important theories of emotions.

Emotions are complex psychophysiological experiences that result from the interactions with your surroundings. In this article, we’re going to look at the main theories of emotions. We’ll examine the different psychological explanations for these experiences.

From a psychological point of view, emotion is a complex state of feeling. Researchers and philosophers believe that it’s the result of physical and psychological changes that influence your thinking and behavior. Emotionality is associated with a variety of psychological phenomena that include temperament, personality, mood, and motivation.

There are positive emotions and negative emotions. These emotions can be related to an object, a memory, or a forecast, among other things. Some emotions are pre-programmed, innate, and universal, such as love, affection, happiness, surprise, anger, and fear. Psychologists call these the primary emotions. Secondary emotions are the ones that you learn through experience. These include pride, rage, shame, negligence, sympathy, and horror.

Let’s take a look at the different theories of emotions.

Emotions strongly influence behavior. But the big question is, why do we even have emotions in the first place? What’s the point of these feelings? Researchers, philosophers, and psychologists have proposed different theories of emotions to explain the how and why of their existence.

Experts divide the main theories of emotions into three categories:
• Physiological theories propose that physical responses in your body are responsible for your emotions.
• Neurological theories argue that brain activity leads to emotional responses.
• Cognitive theories suggest that thoughts and other mental activities play an essential role in the formation of emotions. 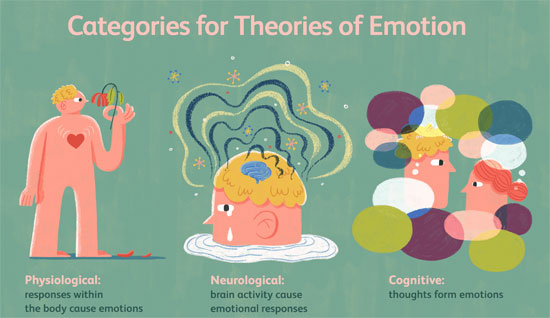 The Evolutionary Theory of Emotion

The evolutionary theory focuses on the historical context of emotional development. According to this theory, your emotions exist so you can adapt better to your surroundings. Your emotions enable you to respond more quickly to what happens around you. That, in turn, improves your possibilities for success and survival.

Identifying and understanding other peoples’ emotions also plays a crucial role in security and survival. If you can correctly interpret others’ emotional manifestations, you can respond to danger sooner and better.

The James-Lange Theory of Emotion

William James and Carl Lange independently proposed this theory of emotion. They suggest that emotions are physiological reactions to events.

The Cannon-Bard Theory of Emotion

Walter Cannon and Philip Bard developed another of the main theories of emotions that we study today.

Cannon didn’t agree with several aspects of the James-Lange theory of emotion. He suggested that people can experience physiological reactions connected to emotions without actually feeling those emotions. He also argued that emotional responses happen too quickly to be simply the products of physical states.

More specifically, this theory suggests that emotions occur when the thalamus sends a message to the brain in response to a stimulus. That message causes a physiological reaction.

According to Stanley Schachter and Jerome E. Singer, reasoning plays an important part in the way you experience emotions.

This theory draws as much from the James-Lange theory as it does from the Cannon-Bard theory. Like James and Lange, Schachter and Singer also argued that emotions result from physiological responses. The critical factor would be the situation and your interpretation of these responses.

According to the cognitive evaluation theory, thinking must occur first before you experience an emotion. Richard Lazarus was the first to pioneer this idea, which is why people often refer to this theory as the Lazarus Theory.

This theory argues that first comes a stimulus, then a cognitive evaluation of the stimulus, and after that a simultaneous experience that consists of the physiological response and the emotion. For example, if you find a bear in the forest, your first thought might be that you’re in grave danger. This leads to the emotional experience of fear and the physical reactions associated with fight or flight.

The Facial Feedback Theory of Emotion

This theory posits that facial movement influences your emotional experience. Psychologists who subscribe to this theory believe that changes in your facial muscles are directly related to your emotions.

For example, if you smile, you can put yourself in a better mood. Likewise, frowning can put you in a bad mood. The interesting thing about this theory is that it suggests that you have a certain degree of control over your emotions. By simply adopting some very common facial expressions, you can voluntarily trigger certain emotions.

In conclusion, Charles Darwin was the first to suggest that physiological changes triggered by your emotions had a direct impact instead of just being the consequence of that emotion. William James expanded on this idea and suggested that, contrary to popular belief, emotion is the awareness of physical changes triggered by a stimulus. In other words, if you didn’t experience physical changes, the response would be purely intellectual, devoid of emotion.

Ashwagandha: Discover the health benefits of this popular ancient adaptogen