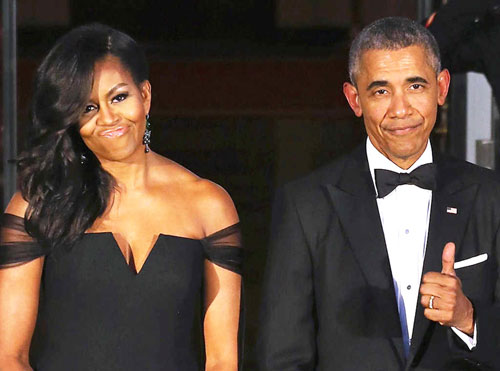 Back in February, former US President Barack Obama and his wife Michelle received an advance payment of $65 million dollars from Penguin Random House, which is owned by the German multinational media conglomerate Bertelsmann.

Obama, who has been on the receiving end of more Wall Street, Hollywood liberal and Silicon Valley technocrat support than a politician ever, is cashing on like Bill Clinton only dreamed he could. Last seen hugging and kissing Germany’s Chancellor Angela Merkel before he left office, Obama is in the limelight partying of late with Lord Richard Branson first, then on Marlon Brando’s exotic island, and just recently on music mogul David Geffen’s super yacht Rising Sun, along with superstars Bruce Springsteen and Tom Hanks. The rumour Obama’s original super-fan Oprah Winfrey was on board only serves to complicate what might otherwise be an alphabet soup of rich people in some tabloid. But Obama with Geffen strikes a resonant chord.

David Geffen is probably one of the two or three most powerful figures in media and entertainment. His estimated personal wealth exceeds $6 billion, but his being labelled as one of the Most Powerful Gay Men and Women in America also bears on this report. Like so many of the key figures who influence our world today, Geffen came out of virtual nowhere in the mid-1970s, to leverage immense power in America. He is one of the reasons Barack Obama gained control of “the message”, the reason the music industry bashed Donald Trump, and one of the reasons the so-called “gay mafia” came to prominence. Geffen is also interesting if we factor in the Pizzagate slimy assertions that came to light via WikiLeaks and Clinton campaign boss John Podesta. The tell-tale shadows of Geffen’s sexual relations with teenage boys and the past testimonies of shamed Digital pioneer Marc Collins-Rector (Buzzfeed found the lost Hollywood’s sex scandal fall guy) taint the billionaire’s “genius boy” image. If you wanted to cast a movie star for a film about the global mafia, Geffen’s sexual propensities would make a perfect sub plot. But the man who helped Steven Spielberg and Jeffrey Katzenberg found DreamWorks exerts the force of a Hollywood propaganda gangster. Just look underneath a Tom Hanks film plot for your themes.

The focus on Geffen is in order to show the media linkages to weakness our world mafia uses, and to tie together the rest of the information and propaganda arm of this “new order” we often speak of. Geffen levers the music and film industry, while print and TV news media are controlled by other “made men”. You will find Geffen’s name in the upper half of a list in the book; Who Owns the World’s Media?: Media Concentration and Ownership around the World just beneath Google’s Larry Page, Sergey Brin, and NSA apologist Eric Schmidt, to name a few familiar names. Obama’s benefactors in the above book deal are there, the Mohn family that owns Bertelsmann, a company that helped the Nazis in World War II. Rupert Murdoch is there, as are Bloomberg and even Facebook’s Mark Zuckerberg – but an unfamiliar name is perhaps the most important here – Vanguard Group. Yes, Disney and all the other suspects are there, but the company founded by John C. Bogle is more important for this story.

John C. Bogle has had six heart attacks and one heart transplant. Like his counterpart, the now deceased David Rockefeller, Bogle has cheated death and the odds many times. His Vanguard Group has also plaid massive odds thriving like never before during the second worst economic crisis in American history, with over $4 trillion in assets. One way Bogle’s company achieves such unprecedented wins is through media control. The fund invests billions right alongside Warren Buffett in companies like: Malone Group, Yahoo!, Time Warner, Time Warner Cable, Redstone Group (CBS and Viacom), and others. Like David Geffen’s, Bogle’s “dream” started really moving in the mid-1970s when Wellington Management Company allowed him to create Vangaurd. During the 1980s and 1990s profits took off and like George Soros and others of his contemporaries, Bogle pulled at powerful financial levers that shaped American policy. In a recent interview, the 87-year-old investor legend assessed the professed policies that won the election of one Donald J. Trump very negatively:

“The gap between the rich and poor, increased racial tension, a little less support for our fortress against communism, NATO and Europe, getting in the way of international trade agreements, complicating them. Those things are all negative for the market in the long run.”

And now for the kicker, the next link in an ever-tightening connective chain. Vanguard and Wellington owns Raytheon, the company that now manufactures the Tomahawk cruise missiles President Trump launched at Syria. The market took a turn upwards for Mr. Bogle’s fund. But the story takes on an even more sensational tone.

This report ties together a former President and a probable gangster media, with an investment group some say is actually run by Khazarian mobsters. Preston James, Ph.D, cites Veterans Today’s editor Gordon Duff on frames the Israel mob as a faction of the crime syndicate purportedly the largest in the world – the Khazarian Mafia. This besides breaking new ground with theories of failed oligarchs ousted by Putin, who later sided with western oligarchs and Cold Warriors! The assertion made by Duff that Israel linked mob controls Vanguard Group and all the companies associated with it is stunning. Stunning, but expected.

Duff sent shockwaves across the intelligence community with his assertions on this New World Order cabal, but Russian Foreign Minister Sergey Lavrov’s call for an end to the Khazarian Mafia was an awakening. Lavrov, seeking at the Munich Security Conference, called for an end to the world order dominated by the west. While an in depth look at alleged Khazarian Mafia crimes is not possible here, the infrastructure of this organization Duff and many others outline is key. Made up of a system of cartels, the reach of the so-called Khazarian Mafia would be unprecedented. In fact several of the synchronized tentacles were outlined here, with the financial, government and political, and the mass media and entertainment cartels illustrated in close proximity.

Finally, Vanguard Group’s other top investors include: State Street Corporation, Barrow, Hanley Mewhinney & Strauss Inc., BlackRock Institutional Trust Company, N.A., BlackRock Advisors, LLC, Bank of America Corporation, Bank of New York Mellon Corporation, Deutsche Bank Aktiengesellschaft and Macquarie Group Limited. More vehement conspiracy theories suggest Jacob Nathaniel Rothschild is the head of this mafia masquerading as Jews. While there’s ample proof the Rothschilds have mafia-like paws on just about everything, the whole syndicate has not as yet been linked. What we can see are the unlikely friends in photo ops scattered on our screens. And we can also see the unbelievable coincidences where money and power coincide with chaos and killing.

At this point, these stories framing how Berezovsky Trap’s snare new mobsters, are illuminating a deadly evil the likes of which the craziest conspiracy theorist could not tell about. The question arises: “Are we beginning to find the root cause of Russophobia and the so-called Great Game after all?” Only more study and time will tell, but for now Nigel Farage’s casual pokes at the EU leadership as “mafia” seem less causal than factual.