The Orchestrated Financial Fall of America and the World 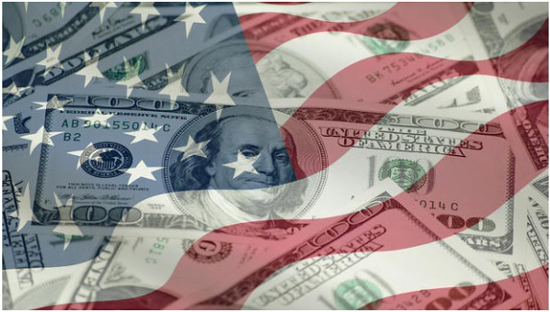 Imagine a bus full of passengers allowing themselves to be taken on some mystery tour chosen by the driver and his navigators. As the journey continues, it becomes more than apparent that the bus is going to be driven off the cliff! The passengers are too much in a state of apathy or too deaf, dumb and blind to realize what’s going on… The driver, under the influence of the navigators, instead of slamming on the breaks, insanely decides to put his foot further down on the accelerator pedal..!

This is an analogy for what is happening in the USA today: The driver and the navigators represent the political administration in charge at the White House with their increasingly reckless spending of borrowed money that is destroying the American economy, while the passengers are the people they’re supposed to be serving with best interest at heart.

More specifically, America is facing the biggest crisis ever in its history.
With the aid of congress and the recent signing of a bipartisan bill by President Trump the U.S national debt is now over $20 trillion. Including over $15 billion emergency money for Hurricane Harvey, the bill has allowed the U.S Treasury to borrow roughly another $318 billion, raising the statutory debt to $20.16 trillion. 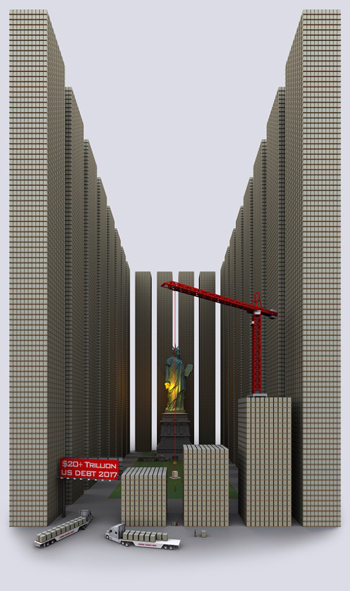 This is what 20 trillion dollars looks like stacked as $100 dollar bills next to the Statue of Liberty, an articulated lorry and a standard American football field.

The human world population is currently well over 7 billion. If every man, woman and child paid off the US national debt it would cost each person about 2,867 dollars.

Check your watches. For every hour gone by, the US national debt increases by another 150 million dollars.

Of course it would take years to pay off the debt, but the Trump administration has no intention of doing this, not by one single cent. That means the politicians are doing nothing to stop a once wealthy nation rapidly change into a poor one. That means money stolen from the American people and their children, and children to be.

Going down the misinformation highway

The mainstream media is not reporting the truth. They want you to believe what everything’s fine. That Trump’s administration and their economic policies are working and the economy is steadily improving… This spin has been blindly accepted by a largely gullible public even though the truth is staring at them in the face. An excellent website documenting the truth with all the facts and figures is theeconomiccollapseblog.com.

How long will it be before the public stop sleeping with their eyes open, wake up and realize what’s really going on?

Can you guess where this is going?

This situation in America is like you running a business on a credit card loan and taking out a further loan from that credit card to pay the on-going monthly demands. Sooner or later you’ll reach bankruptcy, right?

The financial collapse of America has been secretly planed with the deliberate intention to create poverty and slavery for the American people. 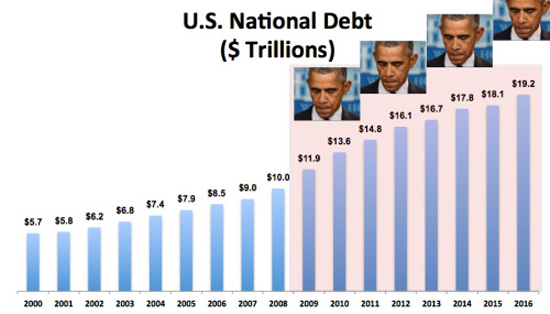 During his time in office Obama managed to contribute to roughly $10 trillion of the $20 trillion U.S. national debt. As a number of us know, whether it’s the USA or any other country, the President is not the person in charge. He has been put in this position to serve a hidden enslavement agenda dictated to him by the real lords and masters secretly controlling the country and the planet.

The idea of borrowing money to get out of debt can be related to the application of John Maynard Keynes’ economic principles. This is encouraged in other countries besides America such as Europe and Japan… The hidden controllers allow these countries to adopt huge stimulus spending plans and reckless spending because they want to see a global financial collapse to engender political chaos.

After the financial collapse, ultimate control of the world is then planned. This will mean:
1. Global monetary dominance with the introduction of a single ‘super currency.’
2. An abusive control system: Global police/military fascist dictatorship, intricate mass surveillance etc., what’s been called a ‘Hunger Games society…’
3. The vast majority of people will be underprivileged and poor. The middle classes will have been financially knocked down while the super-rich remain.
4. In countries such as America a lot of time, effort and money has been put in to extra surveillance, tighter security and the weeding out of ‘troublesome people’, while the US Department of Homeland Security (DHS) has acquired millions of ammunition rounds… all this has been done under the auspices of preventing ‘home-grown terrorism.’ However, this is not the real reason. – All this has been done to deal with the anticipation of a hostile response from people over the orchestrated forthcoming financial hard times and planned one world order.
5. The introduction of FEMA (Federal Emergency Management) camps to accommodate those in financial hardship. The camps may well gradually become prisons.

This is what can happen when a bunch of individuals controlling the planet are a law unto themselves. 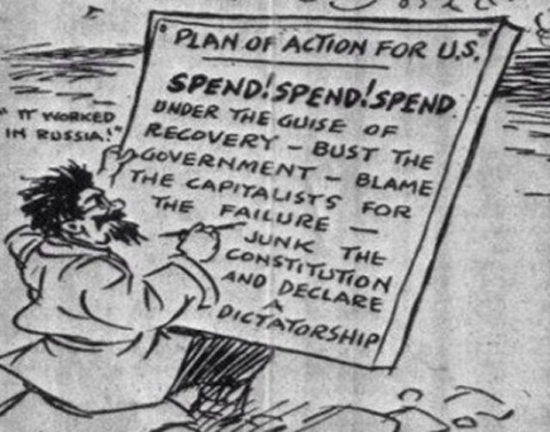 A shift in the wind: 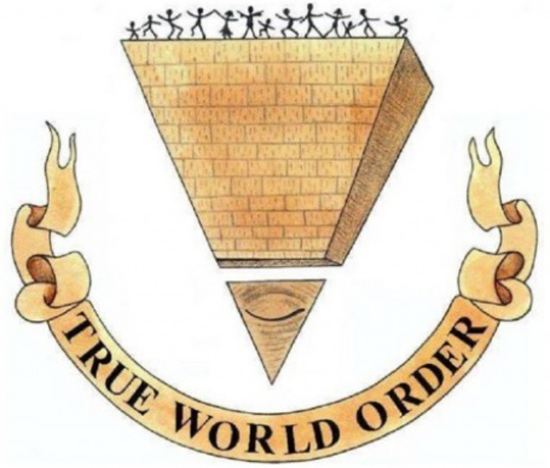 For a workable democratic system the hierarchical pyramid of control has to be turned upside down: Those currently at the bottom, we the people, become those at the top. Indeed, people power does exist. To stop the hidden controllers and their enslavement agenda we the people have to take back our rightful ownership of this planet before it’s too late.