Einstein’s field equations describes the flexible characteristics of space and time; how the very fabric space may stretch and bend in the presence of matter/energy. This flexibility of the space-time manifold is made apparent to us as the universal and familiar force of Gravitation. However, Einstein’s equations also predict that gravity in principle may, and must, become singular, or infinite, at its point of origin within the space-time manifold, forming the mysterious objects known as a black holes. 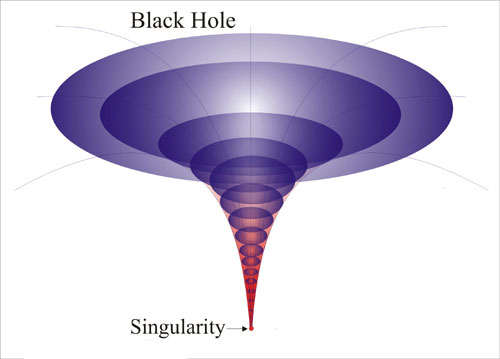 A black hole is normally thought of as a massive object (i.e. a star) which has collapsed under its own gravitational force, creating a “hole” in the space-time continuum; a gravitational well with infinite curvature. Such a curvature is theorized to produce zero volume with infinite density at its core, producing an entity known as a “singularity”.

In a singularity the known laws of physics breaks down as the normal parameters of three-dimensional space no longer holds. At this infinitesimal point of space and time mathematical quantities used to measure gravity increases to infinity, making concrete physics impossible to formulate. In much the same way as the infinite electromagnetic field fluctuations within the quantum vacuum must be renormalized to make sense, here too a quantification of an unlimited energy value is needed – namely the energy of the gravitational field. In simpler terms: to make appropriate and valid calculations for gravitational singularities in physics we need a functional description of Quantum Gravity, which brings us right back to the fundamental conflict between relativistic physics and quantum physics; a conflict arising from our inability to quantify the gravitational field.

Currently there are two fundamental yet completely incompatible theoretical frameworks within modern physics: the Standard model (of particle theory) and General relativity. General relativity describes the flexibility of space-time and the characteristics of gravitational fields at large macro-cosmic scales. It models the force of Gravity as a limitless, continuous field – a continuum – like a coordinate system in space and time.

The Standard Model, which is the overarching theory of particle physics, describes the natural forces that governs physics at sub-atomic scales; the force of electromagnetism and the interactions of elementary particles (particles mediating universal forces). Unlike General relativity, the Standard model describes how the universal force of electromagnetism is transmitted through discrete elementary particles, photons, which are discrete quanta of energy comparable to bits of information. Being subject to the laws of probability and uncertainty the quantum field cannot at all be understood as a function of coordinates, but rather through distribution of limited numbers at every point in space. The concept of continuous fields does not apply to the sub-atomic quantum world and it stands in sharp contrast to the defined particles and limited numbers of quantum physics.

The Standard model is unable to describe why atoms have mass or the mechanics of how Gravity works on subatomic scales (which it supposedly doesn’t), where the gravitational field no longer can be understood as a smooth continuum. Electromagnetism, on the other hand, is elegantly described (algebraically) using limited numbers as a quantum field consisting of elementary particles that convey information from one point to another.

This is not the case with gravity: after years of searching, the “graviton” – the gravitational analogue of the photon – has not been found, and therefore we are not able to grasp the true source of mass in our universe.

Einstein’s equations tells us that mass and gravity are intimately intertwined, yet without a quantification of Gravity there is no mathematically valid way to calculate the interactions and relationship between atomic mass and Gravity itself. This problem is quite dramatic and it festers at the very heart of modern physics and cosmology, for if we do not understand where mass comes from neither can we know what atoms really are, or what matter really is. All theories will be affected by this fundamental lack of understanding. Consequently all theories will be similarly illuminated when our fragmented understanding is united…

The fractal holographic model unites these two perspectives through a quantified understanding of Gravity, which inevitably leads to a holographic understanding of mass. The model proposes that the vacuum density within an atomic nucleus in effect makes it a microscopic black hole, and by using limited numbers based on renormalized values for the vacuum density (Planck Spherical Units) it reveals the source of atomic mass to be a direct function of fluctuations within the quantum vacuum itself. With this we may arrive at a comprehensive, unified understanding of mass, gravity and electromagnetism in our universe. An understanding wherein the “fundamental particle” is no particle at all, but holographic information arising from a potentially infinite energy field.