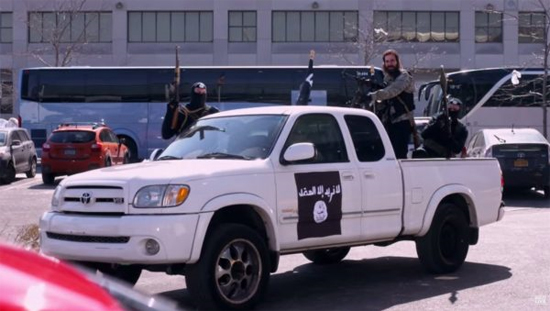 Watching mainstream media reports detail the adventures of Islamic State as they speed carefree across wide-open desert, beards blowing in the wind, one would be forgiven for thinking they were watching a Toyota commercial.

The Times of Israel went so far as to ridicule the leaders of the West for expressing such fear over these militants in their Toyotas like hell raising teenagers speeding around the parking lot of McDonald’s on a Friday night to impress their friends.
“It’s almost unbelievable”, Avi Issacharoff wrote. “They used to say in the Israel Defense Forces that ‘the man in the tank will win’, justifying the preference for armor over infantry. Now we hear that, from a US source no less, ‘the man in the Toyota’ will defeat the West.”

Somehow we are expected to believe that these shiny new trucks, along with over 2,000 Humvee vehicles, fell into the terrorists’ control by winning some battles in Iraq, like in Mosul and Palmyra. That absurd explanation falls very wide of the mark and needs far more inquiry.

Photo taken from the Russian Defense Ministry Press Service Facebook page on Jan. 9, 2018 – one of the drones that was forced to land after an unsuccessful attack attempt sits at a table at Hemeimeem air base in Syria.

On New Year’s Eve and on January 6, 2018, Russia’s Khmeimim Airbase in Syria was attacked. The first incident involved militants armed with mortars that resulted in the death of two Russian soldiers and damage to several aircraft. The second attack involved a swarm of 13 drones armed with bomblets, which Russian forces countered by means of electronic warfare and air-defense systems. Around half of the drones were electronically hijacked by Russian forces, while the others were shot down without incident. Nevertheless, the attack required a high level of expertise from a “technologically advanced country”, according to Russia.

The United States countered the claim, suggesting that such technology can be easily purchased. Pentagon spokesman Maj. Adrian Rankin-Galloway said the “devices and technologies can easily be obtained in the open market”.
Meanwhile, however, President Putin never mentioned Islamic State when he discussed the incident with the media.
“Those aircraft were only camouflaged – I want to emphasize this – to look like handicraft production. In fact, it is quite obvious that there were elements of high-tech nature there”, the Russian leader said.

So are we expected to believe that Islamic State terrorists were able to buy these UAV drones, or is it more realistic to believe, along with the Russians, that some outside major power was needed to provide the know-how?

In March 2016, the warriors of Islamic State picked up their pens in an effort to explain away a question that has been perplexing many observers: why don’t they ever attack Israel?
In the article, translated by a group called MEMRI, the group said it holds to the position that the Palestinian cause does not take precedence over any other jihadi struggle.

“If we look at the reality of the world today, we will find that it is completely ruled by polytheism and its laws, except for the regions where Allah made it possible for the Islamic State to establish the religion… Therefore, jihad in Palestine is equal to jihad elsewhere,” the article said.
“The apostate [tyrants] who rule the lands of Islam are graver infidels than [the Jews], and war against them takes precedence over war against the original infidels” the article said, as reported in the Times of Israel.

Whatever the case may be, this seems to be the first time in modern history that a radical jihadist group has had no reason to quarrel with Israel. 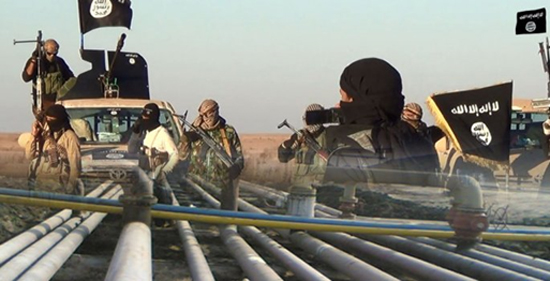 After Islamic State managed to make it across the vast desert between Iraq and Syria without attracting so much as a damaged fender, it managed to do the unthinkable: it set up a very lucrative oil-export business practically overnight in the north of the country. And this was not some small-time operation.

According to one estimate, the motley crew of mercenaries was generating profits of more than £320 million a year from oil exports, or about 40,000 barrels of crude every single day.
Are we really expected to believe that a 19-member military organization led by the United States was powerless to put this rag-tag operation out of business?

The reason why the story is so utterly preposterous is that Russia, in a matter of several days, was able to do what this multinational outfit could not do in over a year. In mid-November 2015, Russia had announced that it had destroyed in a matter of days some 500 fuel trucks – and there is plenty of videotape of the Russian attacks for the naysayers who doubt the Kremlin’s claim.

According to Russian General Staff spokesman Colonel General Andrey Kartapolov: “In just the first few days, our aviation has destroyed 500 fuel tanker trucks, which greatly reduced illegal oil export capabilities of the militants and, accordingly, their income from oil smuggling”. 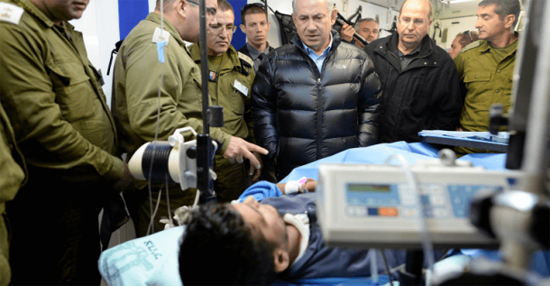 In March 2015, The Wall Street Journal reported a rather stunning revelation: that Israel was treating “Al-Qaeda fighters wounded in the Syria civil war”.
Since the outbreak of the Syrian civil war, Israel has provided medical assistance to nearly 2,000 Syrians. The Wall Street Journal quoted “an Israeli military official” who said no questions were asked of the patients. “We don’t ask who they are, we don’t do any screening”, the official said. “Once the treatment is done, we take them back to the border and they go on their way.”

Amos Yadlin, the former military intelligence chief, told the Journal that Hezbollah and Iran “are the major threat to Israel, much more than the radical Sunni Islamists, who are also an enemy”.
“Those Sunni elements who control some two-thirds to 90% of the border on the Golan aren’t attacking Israel. This gives you some basis to think that they understand who their real enemy is – maybe it isn’t Israel.”

The Jerusalem Post repeated a joke allegedly told by Syrian President Bashar Assad to Foreign Affairs: “How can you say that Al-Qaeda doesn’t have an air force? They have the Israeli air force… They [Israel] are supporting the rebels in Syria. It is very clear”.

10. The Pentagon report that speaks volumes

In May 2015, a declassified Pentagon document provided shocking evidence that the US-led campaign in Syria not only contributed directly to the rise of the Islamic State (IS), but that Washington was perfectly satisfied with such an outcome.

The US Defense Intelligence Agency (DIA) report, obtained by Judicial Watch, dated August 2012, states that the “major forces driving the insurgency in Syria” comprise “the Salafist, the Muslim Brotherhood, and AQI [Al-Qaeda in Iraq]”.
Furthermore, it states these forces are being supported by a Western-led coalition – “The West, Gulf countries and Turkey support the opposition”.

It went on to predict that the takeover of Hasaka and Deir Ezzor would possibly create a militant Islamist political entity in eastern Syria: “If the situation unravels there is the possibility of establishing a declared or undeclared Salafist Principality in eastern Syria (Hasak and Der Zor), and this is exactly what the supporting powers want, in order to isolate the Syrian regime, which is considered the strategic depth of the Shia expansion (Iraq and Iran).” 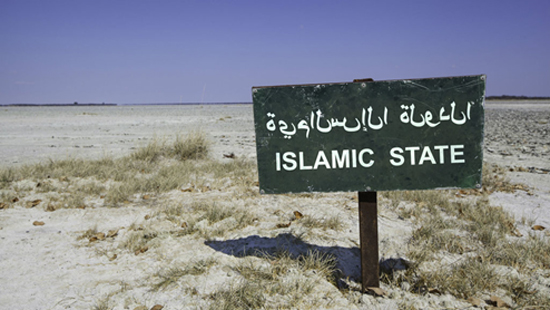 According to Nafeed Ahmez from Middle East Eye, “This extraordinary passage confirms that at least three years ago the Pentagon anticipated the rise of a ‘Salafist Principality’ as a direct consequence of its Syria strategy – and that the ‘supporting powers’ behind the rebels ‘wanted’ this outcome ‘to isolate the Syrian regime’ and weaken Shiite influence via Iraq and Iran”.

Let that sink in for a moment. The US-backed coalition, which seemed so inexplicably lackluster in its fight against Islamic State, to the point where this group was actually able to open an oil export business, not to mention drive its Toyota trucks across wide-open desert unmolested, was more content to let a band of terrorists occupy Syria than the legitimate government in Damascus.

It seems safe to say, based on the findings of this incredible document, that such a rationale is exactly what guided Washington’s hand not only in Syria, but in other regime-change war zones, like Iraq and Libya. Democracy building was not the desired result in these fated places, but absolute chaos.

Project MK-Ultra and Dr. Ewen Cameron ‘stole my mother away from me’