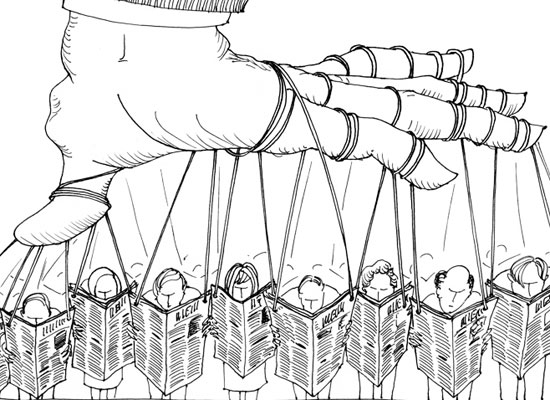 Modern day propaganda is all around us. However, people have usually become so numb to it that they can no longer perceive it. Many people choose ignorance, complacency or apathy to deal with it. Often you can observe groups developing societal Stockholm Syndrome, where they praise they captors out of a forlorn hope that by doing so that may somehow change things or alleviate the pain.

The control system uses all of its tentacles to keep people conditioned to a more a sheeplike and unconscious state. It is the politician’s job to lie, the MSM (mainstream media’s) job to program you and Big Pharma’s job to keep you sedated with synthetic petrochemical drugs. It is a constant battle to broaden your awareness, uplift your consciousness and expand your perception in the face of these forces which seek to imprison humanity in a limited perception of Who We Are, who’s running the world, how they’re doing it and how we can change it. Propaganda does not just belong to Nazi Germany or Soviet Russia. Modern day propaganda is everywhere; sometimes subtle, sometimes overt, always pervasive.

With that in mind, this is a collection of the top seven pieces of modern day propaganda:

1. The Syrian War is a civil war. False.
The Syrian War has never been a civil war; it’s a proxy war fought by foreign fighters with foreign aid. It has become an open secret that the US-UK-Israeli axis, along with the Saudis, have either created or are funding ISIS (or both). Evidence keeps coming to light showing that Israel is paying Syrian rebels and that ISIS gets their weaponry and Toyota trucks from the US. Many “rebels” fighting the Syrian Government of Bashar Al Assad are not even Syrian. Remember Obama’s freudian slip that “we’re training ISIL”?

2. The US is fighting ISIS in Syria. False.
ISIS (aka Daesh, ISIL, IS) is the pet Frankenstein of the Anglo-American-Zionsit NWO and is a US-Israeli creation. The US has no real interest in defeating ISIS – at least not until ISIS has caused the maximum amount of chaos designed to unseat legitimate governments and facilitate regime change. The real target has always been Assad (then Iran, then Russia and China). There is copious evidence for this. Two quick examples are the incessant mantra a few years ago that “Assad must go” (until the NWO controllers realized Assad was strong enough to defend himself and his nation) and the recent shooting down by the US Coalition of an SAA (Syrian Arab Army) jet.

3. All the refugees flowing into Europe are genuine refugees. False.
Some (or many, depending on your perspective) refugees are economic migrants. They are being helped by a network of NGOs (e.g. those funded by George Soros) who have an entire system of transporting migrants from Libya to Italy for money. It’s people smuggling/human trafficking.

4. US military intervention abroad makes everybody safer. What a load of nonsense!
When he ran for US president in 2012, Ron Paul made a point of emphasizing the concept of blowback (which the CIA had written about) in some of his speeches. UK Labour leader Jeremy Corbyn recently had the courage to state the obvious in Britain: “Many experts, including professionals in our intelligence and security services have pointed to the connections between wars our government has supported or fought in other countries, such as Libya, and terrorism here at home”. When a poorer and less militarily developed nation is picked on and attacked by a rich bully nation, the former is likely to harbor resentment and a desire to retaliate in the future. Many North Koreans still hate the US for carpet bombing into oblivion after WW2. Therefore, Western foreign meddling, assassination and invasion has made America the new “Satan” and enemy number one for many people around the world, and has become one of the motivations for attacks on England, France and Germany. Thus, the US is far more likely to be attacked than if it had not intervened.

5. Iran is the biggest state sponsor of terrorism in the world. Flat out false.
While Iran may support Hamas in Palestine and Hezbollah in Lebanon, Iran has nothing on Saudi Arabia, who funds a pervasive network of extremist Wahhabi Islam schools (madrases) worldwide. It is utterly ridiculous and beyond hypocritical that Saudi Arabia now accuses Qatar of terrorism. Israel has also been behind many so-called “Muslim” and “Arab” terror incidents. Israel and Saudi Arabia now form a dark alliance– with the assistance of the US Empire, the biggest purveyor of war (and terrorism through funding it) the world has ever known.

The US Government learnt its tricks from the UK Government, both of which have been tools in the hands of the New World Order. The US alternatively backs and then disowns “terrorists” or local fighters in certain areas (e.g. Central America or the Middle East) as the NWO agenda dictates. Once a group has outlived its usefulness, the nomenclature changes from “freedom fighters/liberators” to “enemy combatants/terrorists”. 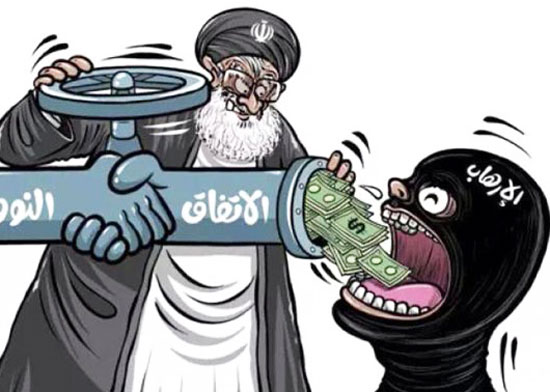 6. Russia is the biggest threat the Western world is facing. Not true.
At every turn, Russian President Vladimir Putin keeps insisting that Russia does not view the US an as enemy, that the two great nations were on the same side for both world wars and that mutual cooperation is the only way forward. The US ignominiously lied after the collapse of the Soviet Union by promising Russia that NATO would not expand eastwards – and meanwhile keeps adding numerous Eastern and Central European nations to its alliance such as Poland, Hungary and the Czech Republic (1999), then Bulgaria, Estonia, Latvia, Lithuania, Romania, Slovakia and Slovenia (2002-2004), Albania and Croatia (2009) and Montenegro (2017). Russophobia is a convenient political tool to justify NATO, get people scared and allow bigger domestic military budgets in Western nations. It’s also a handy scapegoat for the Democrats to use in trying to account for the election loss of the incredible corrupt Hillary Clinton. Trump saw the obvious truth that it’s better for everyone if the US and Russia get along – before the Deep State got to him.

7. Israel is only defending itself. False.
Israel attacked its neighbors even before it gained official statehood in 1948. It has attacked Egypt to begin the Six Day War in 1967, attacked Lebanon in 1982 and has been seizing Palestinian land ever since its inception. There’s noting “defensive” about raw, naked aggression. The truth is that Zionism is a colonial endeavor. Look at the quotes of early Zionists like Ze’ev Jabotinsky, one of the main men behind the expansionist, militaristic and anti-Arab form of Israeli nationalism that now dominates the Likud Party and Israeli politics. Take a look at what Jabotinsky, as well as former Israeli prime Ministers David Ben Gurion and Ariel Sharon, have said about Zionism and the fact that it is intimately bound up with colonialism, eviction and expropriation:

“We will expel the Arabs and take their place. In each attack a decisive blow should be struck resulting in the destruction of homes and the expulsion of the population.” David Ben Gurion, Prime Minister of Israel 1949-1954, 1955-1963.

“There is no Zionism, colonization, or Jewish state without the eviction of the Arabs and the expropriation of their lands.” Ariel Sharon

Modern day propaganda in the sphere of geopolitics is dangerously widespread. With people buying into the lies, distortions and disinformation listed above, conflict and war is much more likely to be started.

Why Having a Sense of Purpose Could Help You Sleep Better