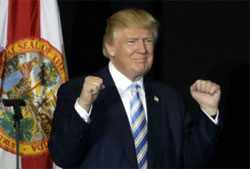 Donald Trump, the real estate mogul mocked and minimized by the media and political establishment, has stunned the world with a death-defying campaign that has captured the presidency.

The real estate mogul, mocked and minimized by many in the media and criticized by his own party’s establishment, wound up doing far more than avoiding the landslide loss that so many prognosticators predicted after the conventions. The man who had never run for public office, who had supposedly alienated so many women and minorities that he had no serious chance, somehow captured the highest office in the land.

It was not until 2:30 am on November 9th that first the AP, then the Washington Post and Wall Street Journal, then Fox News, declared Trump to be the 45th president.

There was a sense of disbelief, even shock, among journalists on and off the air as states like Ohio, North Carolina and Florida fell into the Trump column and Clinton failed to put away the big blue Midwestern states. Once Trump was within 54 electoral votes of winning the White House, the entire conversation changed:
How did Trump do this?
How could Clinton have blown this?
How could we have missed this?
How would this guy govern?

Some media figures lashed out on Twitter. ABCʼs Martha Raddatz choked back tears as she discussed the Trump presidency.
It was a version of what has gone on since the billionaire came down the Trump Tower escalator in 2016, when he was treated as an entertaining figure but not as a plausible president. The Huffington Post was less than gracious at the end: “Nightmare: President Trump.” 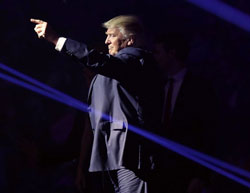 The mainstream media mindset was clearly going into “Trump Hopes for a Miracle”, as Politico declared – and few believed he would carry the half-dozen states that would get him to the magic 270.

Some have been sounding this alarm for a year and a half – not that Trump would win, but that he could win. That there was a reason he beat the Republican establishment. That the coastal-elite media didn’t just underestimate the anger and frustration in much of the country, but had little ability to understand it.

Trump wound up providing a night of unexpected suspense, to the point where the Dow futures plunged 3 percent and the New York Times at one point gave him the edge.

In the end, the system wasn’t rigged. A former first lady, senator and secretary of state couldn’t beat a rich guy who spent his career building hotels, casinos and golf courses along with running a reality show.

The campaign was so endless and ugly, and the nominees so relentlessly reviled, that Clinton’s potential status as the nation’s first female president seemed almost to slip off the radar.

Public attention will quickly shift to how Trump govern a bitterly divided country, even with the help of a Republican Congress and facing an embittered Democratic minority. He will also face a news business that he has decried as corrupt and dishonest.

The conventional wisdom is that gridlock will continue to grip the nation’s capital, precisely the condition that has left so many Americans disgusted by a broken political system. But Trump has defied expectations many times.

The 2016 election, which seemed to shatter cultural norms, ended with an outcome that the people who run the country had great difficulty imagining: President Trump.