UFOs and 9/11: understanding the two greatest conspiracy theories of our time 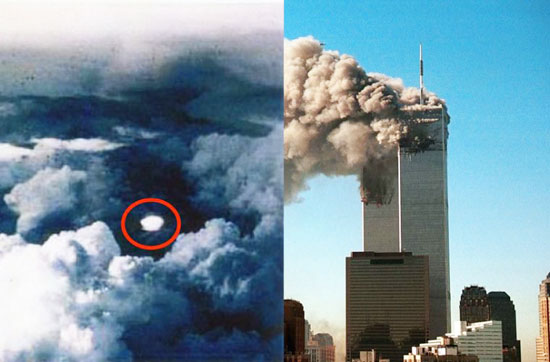 The UFO on the left in the picture above is from a real photo that was snapped by a few Canadian military pilots in flight. That photo, along with many others, have been published in peer-reviewed scientific journals. For example, it was used in this study put out by multiple scientists, published in the Journal of Scientific Exploration.

Two things that have been labelled as “conspiracy” by many are turning out to be true, and those are the existence of UFOs and 9/11 being a false flag attack.

In the present there are thousands upon thousands of declassified documents showing pictures and videos taken by the military as well as civilians. These objects have also been tracked on radar and visually confirmed from the ground and air. Not only that, but up to one thousand military whistleblowers from around the globe, of all rank, accompanied by a number of academics, scientists, and high ranking politicians, have been coming forward to spread the message that UFOs are real.

According to the whistleblowers, some of the UFO’s are indeed occupied and controlled by an extraterrestrial presence. This belief has been around for decades by some of the world’s most brilliant minds. Herman Oberth, for example, one of the founding fathers of modern rocketry was one of the belivers.

“It is my thesis that flying saucers are real and that they are space ships from another solar system. I think that they possibly are manned by intelligent observers who are members of a race that may have been investigating our Earth for centuries”. Oberth, H., Flying Saucers Come From A Distant World, The American Weekly, Oct 24, 1954.

There are hundreds of statements that have been made more recently as well.

“Yes there have been crashed craft, and bodies recovered. We are not alone in the universe, they have been coming here for a long time. I happen to be privileged enough to be in on the fact that we have been visited on this planet, and the UFO phenomenon is real.” Dr. Edgar Mitchel, 6th man to walk on the moon.

Perhaps this is why the CIA and other agencies have recruited these brilliant minds to help them study the phenomenon and get to the bottom of what’s going on. For example, here is a CIA document showing the agency’s efforts to recruit legendary physicist Dr. John Wheeler to study UFOs.

As far as 9/11 goes, it’s difficult to know where to begin. All of the polls conducted over the years show that at least half of the American population doesn’t believe the official story provided to them by their government.

It’s no secret that the majority of the Western world has lost faith in their governments. When it comes to 9/11, perhaps the most recent information to emerge is a study published in 2016 by scientists and engineers, titled 15 Years Later, On The Physics of High-Rise Building Collapses, in the European Scientific Journal.

Richard Dolan is one of the world’s leading researchers and writers on the subject of UFOs, and believes that they constitute the greatest mystery of our time. He is currently working to uncover and share information about false flag terrorism, and how the global elite have had their hand in war, terrorist attacks, and more in order to justify the infiltration and destabilization of other countries. Richard completed his graduate work at the University of Rochester, where he studied U.S. Cold War Strategy, European History, and International Diplomacy. Before that, he had studied at Alfred University and Oxford University, and had been a finalist for a Rhodes scholarship. As you can see, he is definitely a well-researched deep thinker.

Below is a video of Richard speaking about the parallels, overlaps, and significance of the UFO and 9/11 cover-ups. It was created in 2008, but still full of a lot of key information that many people haven’t yet heard.