What If Gluten Intolerance is really GLYPHOSATE POISONING? 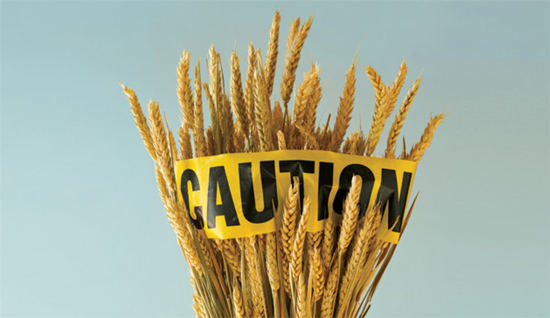 Gluten has been in wheat since it was first grown. Sure, there have always been folks who have problems digesting wheat or grains with gluten. Today, about 50% of the world have problems with gluten. Something has changed.
That “something” is glyphosate. 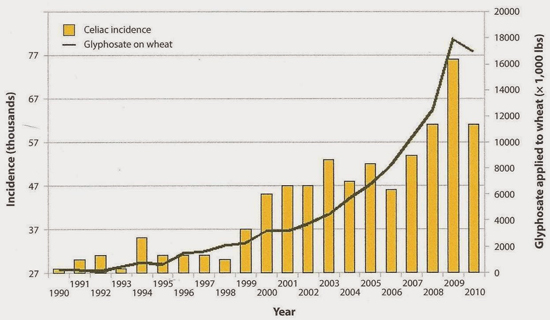 Glyphosate has only been on this planet since Monsanto patented it as Roundup in 1973. This chemical herbicide goes by 32 or more trade names and, now that the patent protection expired in 2000, is made by nine chemical companies – most of whom, not coincidentally, are also in the drug business. Over 200 million pounds of it is used all over the world every year. That’s 100,000 tons! Roundup brings in half of Monsanto’s yearly profits. Like vaccines, each manufacturer can add its own extra ingredients called adjuvants or surfactants. Some data suggests that the adjuvants are even more toxic than the glyphosate.

The original use of glyphosate was to prevent weeds. Somewhere along the way, it was discovered that a pre-harvest spraying of glyphosate directly onto the crops made for an easier harvest, as it desiccates the material. Wheat and cane sugar are the two foods most often treated in this manner. What foods have wheat and sugar? Take a walk down the cereal aisle, the one with the pretty boxes that beckon to your children. See the cookies, crackers, breads, cakes – all those things that have gluten – as well as a double dose of glyphosate.
Nice. And we really, really mean “nice”. Etymology: “Middle English – foolish, wanton, from Old French, from Latin nescius – ignorant, from nescire – not to know.”

Monsanto applied for the patent on glyphosate with full knowledge that it worked by blocking the shikimate pathway of plants and certain bacteria. Therefore, since people are not plants or bacteria, glyphosate must be safe, they told the FDA.
What Monsanto did not disclose is that the bacteria in a human gut all have shikimate pathways. This is huge. Without gut bacteria, people become very ill and malnourished, develop antibodies to their own organs, mentally depressed, full of yeast and other pathogenic bacteria, and mineral deficient. Nerve transmission fails and energy is gone. The mind cannot focus. Children get labeled at school as having behavior problems. Adults think they are crazy and run to the Prozac. This could only have happened if the scientists at Monsanto and FDA are malevolent and the worst sort of facinorous psychopaths. They are not nice guys, not ignorant of their deeds; let us call them what they are: murderers.

You do not have gluten intolerance; that is a symptom. You have been poisoned by glyphosate, therefore you have glyphosate poisoning. The first step to healing is calling something what it is. Using euphemisms and hiding wickedness behind medical and nebulous diagnoses does no one any good. The guilty go free and the victims are denied proper treatment and timely justice.

Endgame: Disclosure and the Final Defeat of the Cabal (3)