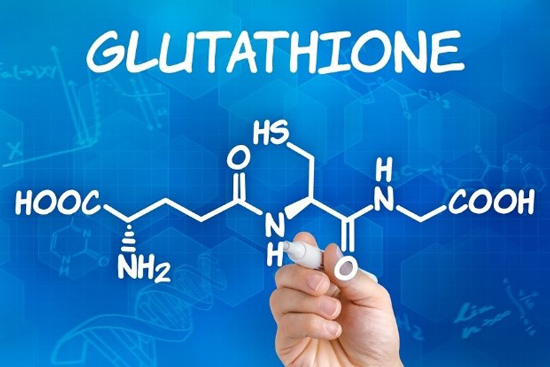 Many are aware of antioxidants that are rich in certain foods and supplements. But few know of glutathione’s importance with the whole scheme of antioxidants. They’re important and unique because they are able to recycle the other spent antioxidants and put them back into action.

One could compare a car’s electrical system to this activity. The battery is recharged from what is called an alternator. When the alternator fails or malfunctions, the battery is sure to expire. Replacing the battery only results in having to replace or recharge it overnight again. Consider glutathione’s restorative antioxidant activity generated in the liver as your antioxidant “alternator”.

Glutathione’s Relevancy in Our Toxic Age

Glutathione activity is originated in our bodies by the liver, which contains the largest supply of glutathione, and it should also be present throughout the body within cells and outside cells in the blood.
But when toxins and free radicals exceed the liver’s glutathione production and its intracellular activity of both eliminating toxins and restoring or “reducing” antioxidants, the process of clearing toxins and free radicals is diminished. The result is poor health and rapid aging.
Since WWII, our environmental toxicity, food toxicity, and medical toxicity has increased exponentially. Three generations of human evolution were not enough to evolve our genetic capacity for increasing our glutathione to keep up with this increased toxic load we live in.

Glutathione becomes inactive when it becomes saturated from doing its work of collecting free radicals, but it tends to regenerate itself within the liver. Under ideal conditions, 10% of the glutathione remains inactive, or oxidized, while the other 90% is active, or reduced. Reduced or active glutathione is known as GHS, which continues to assist cleansing cells of toxins and recycling other antioxidants.

As the active glutathione or GHS drops below 90% and allows the inactive to increase beyond 10%, the struggle for optimum health becomes a losing battle. It becomes too difficult to remove toxins naturally.
As active glutathione diminishes even more, inactive glutathione known as GSSG increases. When GSH falls below 70% with its corresponding increase of GSSG, darkness descends on one’s immune system. As we age, our liver’s ability to convert GSSG into GSH diminishes. Of course anyone with liver issues at any age may have this problem as well.

Some unfortunate individuals have genes that create the enzymes to stimulate GHS production impaired from our sudden surge in environmental toxins. Genes GSTM1 and GSTP1 are among them. Dr. Mark Hyman, MD, suffered from this defect himself. He has tested his chronically ill patients for those genes and discovered this was the key to their poor chronic health.
Many consider aging diseases to be caused by this impairment, confirming the belief that maintaining high GSH levels is a key to anti-aging. This includes reducing ailments considered part of aging, maintaining adequate energy, and recovering from illness, infection, or severe medical interventions for physical traumas.

Studies have been performed demonstrating low GSH in individuals suffering from acute ailments and chronic diseases compared to healthy individuals who were tested for high levels of GHS.
Another study involving a thorough analysis of glutathione’s cellular protective role is available here.
If you wish to peruse or closely analyze an even more thorough technical analysis of glutathione’s biochemical activities, you can do that here.

How to Increase Your GHS Glutathione Levels 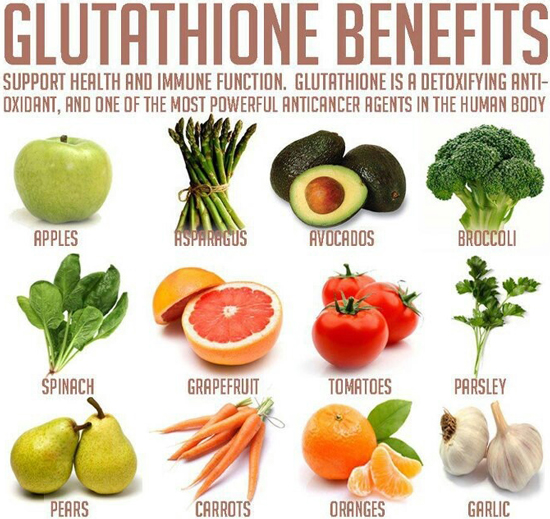 As mentioned, it is normally produced in the liver as the body’s antioxidant alternator or generator. But adding glutathione directly from foods and supplements is unworkable because it doesn’t remain intact through the gastrointestinal tract enough to be absorbed into the blood through the small intestines.

Glutathione is a simple but powerful molecule composed of three amino acids: cysteine, glycine, and glutamine. They contain a high sulfur chemical content, which offers a sticky substance that helps grab toxins, even heavy metals. So foods rich in sulfur and the supplement MSM (Methylsulfonylmethane) are helpful for maintaining glutathione levels.

Oral supplements that contribute to creating GHS are available and inexpensive. The most common one is NAC or N acetyl cysteine. You’ll find NAC in supplement sections of health food stores or other supplement sources. Select NAC from reliable brands that are not “powered up” with additional ingredients. It’s the cysteine that’s important.

Then there is whey, which has to be pure and unadulterated. That’s not the norm for whey products favored by body builders for muscle building protein. The whey should be pure and from the milk of freely grazing grass fed cows that are not injected with hormones or antibiotics. The milk from which the whey is extracted should be raw, not pasteurized. There should be no additives in the whey powder.

Two methods have been developed for delivering glutathione directly:
One method is using the liposomal technology of lipid encapsulation technology (LET) that created liposomal C, which enabled the vitamin to access cells more directly.
LET also protects whatever is encapsulated from stomach acids to retain its integrity throughout the digestive process. So LET was perfect for oral glutathione.

The other method involves slowly dripping IV solutions directly into one’s vein. This has been popularized with the recent surge of IV vitamin therapy centers. However, this method is quite extreme and one should only consider it in specific cases, when one’s therapist recommends it…
A less expensive direct application of glutathione is achieved with glutathione patches.

Why glutathione is essential for detoxification

Twenty-four hours a day, we are bombarded with man-made environmental chemicals. These include herbicides and insecticides, vehicle and factory emissions, heavy metals in our food and cosmetics, and cleaning products laden with chemicals such as benzene and chlorine. Given this heavy toxic burden, it is not surprising that the incidence of toxicity-induced diseases is currently skyrocketing. The good news: the natural substance glutathione already being produced in your body can neutralize these poisons – to help ward off disease and even slow down the aging process.

Glutathione is the body’s premier antioxidant

No substance in the body has more power to nullify toxins and protect cells than glutathione. In the form of glutathione reductase – which is glutathione in its natural, enzymatic state – it is used by every cell in the body to help preserve them in their undamaged – or redox – condition.

This life-prolonging workhorse protects cell DNA from damage, protects against harmful free radicals, decreases inflammation, reduces oxidative stress and wards off heart disease, neurological decline and cancer. By promoting healthy cell mitochondria energy production, glutathione actually provides anti-aging effects.
Although glutathione appears in every cell of the body, the greatest concentrations of it are in the detoxifying organs, such as the liver and kidneys. In fact, without glutathione, detoxification would be essentially impossible.

Glutathione promotes all stages of detoxification

Detoxification takes place in three separate stages, and glutathione enhances all three of them.
Phase one is toxin modification, in which toxins are identified and changed – through oxidation and reduction reactions – into forms the body can more easily attack.
In phase two, the modified toxin is conjugated – meaning its activated metabolites are bound to glutathione. Although other antioxidants in the body can bind toxins, glutathione is the primary participant. As testament to this fact, this second phase is also called “glutathione conjugation”. This binding keeps toxic metabolites from spreading into and across membranes, and helps to confine them.
In phase three, or excretion, enzymatic derivatives of glutathione – known as glutathione S-metabolites – work to cause the metabolism and final excretion of toxins.

Glutathione is produced in the liver from three different amino acids. But stress, poor nutrition, a sedentary lifestyle and prescription medications can deplete the body’s stores. And, as is the case with so many health-promoting substances, the young possess glutathione in lavish supply, while levels fall in older individuals.

Chronic exposure to toxins also threatens glutathione levels – which means toxins deplete the exact substance that your body most needs to neutralize them.
Unfortunately, most commercially-available supplements of this essential nutrient are poorly absorbed, and few foods – with the exception of broccoli and carrots – contain any glutathione to speak of. In addition, the process of cooking depletes almost 100 percent of this valuable substance.

The best bet for ramping up your body’s production of glutathione is to consume healthy amounts of the three “building blocks” of glutathione – the amino acids L-cysteine, L-glutamic acid and glycine – while also making sure you get enough of the nutrients necessary for glutathione synthesis: vitamins B-2 and B-6, along with the mineral selenium. It is a fairly straightforward – but vital – recipe.

Natural health experts advise enhancing glutathione production by eating healthy qualities of garlic, onion, parsley, avocados and cruciferous vegetables such as Brussels sprouts, cabbage, broccoli and kale. Of course, you should opt for certified organic products to minimize exposure to toxins.
Cinnamon and turmeric are also recommended, along with non-denatured organic whey protein from grass-fed cows or goats.

Raise your glutathione levels with NAC

The most effective means of raising glutathione production, however, might be N-acetyl-cysteine.
High dosages of NAC are often used to detox patients who have ingested poisons, and some researchers theorize that low doses can block age-related loss of glutathione. Animal research shows that cells from younger animals are more resistant to stress than cells of older animals.

Older cells not only lose glutathione more quickly under stress – but die twice as rapidly as cells from younger animals. However, researchers found that pretreatment with NAC raised glutathione levels in older cells and helped to reduce cell death.
You can also try to minimize your exposure to glutathione-destroying toxins. Cut down your heavy metal exposure by drinking purified water (or real spring water – tested for quality), organic cleaning products, and glass containers and cookware for food storage and reheating – plus, consider using natural stress reduction techniques, such as yoga, biofeedback, mindfulness or tai chi.

What Parents Should Know About EMFs and Wi-Fi (2)