Why you should consider drinking tea: It boosts metabolism and, experts now believe, acts as a prebiotic for good gut health 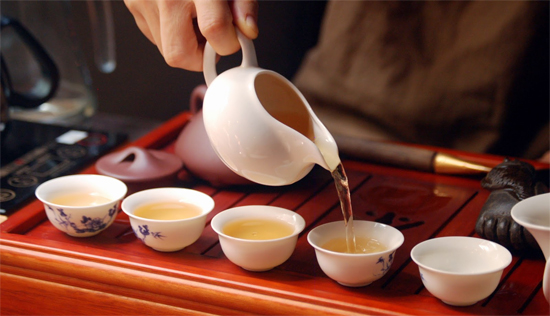 Towards the end of the experiment, the researchers made an evaluation on the weight of the mice, bacteria content in the large intestine, and fat deposits in the liver tissues.
The findings, published in the European Journal of Nutrition, revealed that mice who received either green or black tea extract lost weight similar to the weight of those who had a low-fat diet. Moreover, the green and black tea extracts acted as a prebiotic for the intestines. The groups of mice that had either of the two green tea extracts had less intestinal bacteria linked with obesity and more microorganisms associated to lean body mass.

Surprisingly, the researchers discovered a new health benefit of black tea.
“For black tea lovers, there may be a new reason to keep drinking it”, said Zhaoping Li, an author of the study.
The group of mice who had black tea-extract were seen to have a bacteria that enhanced the metabolic processes. The researchers believe that this is because of the big size of the black tea’s molecules. As a result, these molecules of black tea are too large to be absorbed by the body, but instead they stay in the large intestine.

“It was known that green tea polyphenols are more effective and offer more health benefits than black tea polyphenols since green tea chemicals are absorbed into the blood and tissue”, said Susanne Henning, lead author of the study.
“Our new findings suggest that black tea, through a specific mechanism through the gut microbiome, may also contribute to good health and weight loss in humans,” said Henning.

Moreover, Henning said that the results suggest that both green and black teas are prebiotics, which are substances that prompt the growth of good microorganisms, which in turn can benefit to the health of a person.

Other benefits of English breakfast tea

English breakfast tea is plain black tea without the addition of herbs or other ingredients. It is made from the leaves of the Camellia sinensis plant and is the second most commonly consumed drink, next to water. This tea has been popular in trades for centuries because of its flavor can be retained for many years. There are various health benefits that you can get from drinking black tea.

Black tea can make you look young and fit and can de-stress you. A study found that drinking black tea can lower the levels of the stress hormone cortisol more quickly than those who were given the fake or placebo tea.

Black tea was found to be beneficial for the cardiovascular health. One study discovered that those who drank black tea for four weeks had improvements in the functioning of their blood vessels by 50 percent. This may be the effect of the tea’s flavonoids, which are plant compounds that act as antioxidants and prevent the formation of plaque in artery walls.

Another benefit of black tea is it is considered an anti-cancer agent. A study found that a black tea compound known as theaflavin-3′-monogallate, or TF-2, caused colorectal cancer cells to self-destruct without damaging normal cells.

This tea was also found to increase memory, focus, and concentration, according to study. It is because of the combination of caffeine and L-Theanine, an amino acid found in tea that improves reaction time and memory.
Lastly, it can lower your cholesterol levels. One study found that five servings of black tea per day reduced cholesterol levels by 6.5 percent.