There is NO OPTION on this. You must boycott ALL cellular and wireless technology, including on phones and laptops.

Wi-Fi Report – Humanity at the Brink

[Editorial Staff Note: Dr. Barrie Trower is a former Royal Navy Microwave Weapons Expert and former cold-war captured spy debriefer for the UK Intelligence Services. Dr. Trower is a conscionable whistle-blower who lectures around the world on hidden dangers from microwave weapons and every-day microwave technologies such as mobile-phones and Wi-Fi. Dr. Trower has also repeatedly assisted the UK Police Federation in their struggle to protect police officers from Tetra/Air-Band radio-communications systems that are harmful to health.]

With deference to all scientists: this research report has been written for all students and non-scientists to understand.

As stated by university researchers, government scientists and international scientific advisors; a minimum of 57.7% of schoolgirls exposed to low-level microwave radiation (Wi-Fi) are at risk of suffering stillbirth, foetal abnormalities or genetically damaged children, when they give birth. Any genetic damage may pass to successive generations. 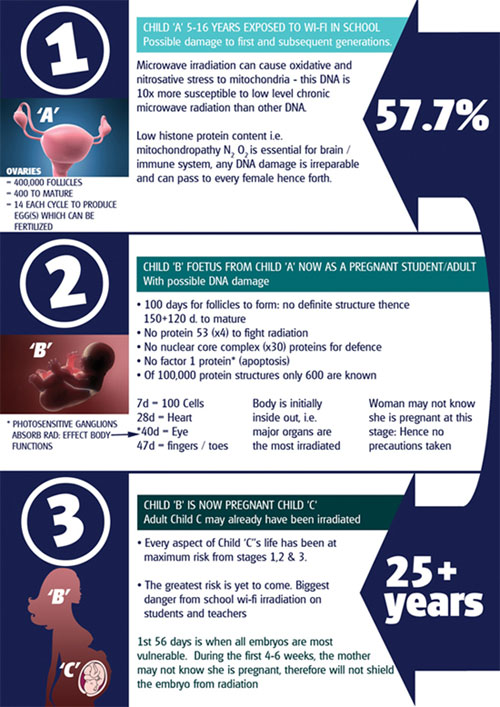 Professor John R. Goldsmith, international advisor consultant for R.F. Communication, Epidemiology and Communications Sciences, advisor to the World Health Organisation, military and university advisor, researcher, wrote concerning the low level exposure of microwave irradiation (below thermal level) incident upon women: “Of the microwave-exposed women, 47.7% had miscarriages prior to the 7th week of pregnancy…”

The level of irradiation incident upon the women was stated as from five microwatts per centimetre squared. This level of irradiation may seem meaningless to a non-scientist; however, when I say that it is below what most schoolgirls will receive in a classroom of Wi-Fi transmitters, from the age of approximately five years upwards, this level becomes more meaningful.

A distinction here must be made and a very important one: schoolgirls are not women. Schoolgirls are children and children are both neurologically and physiologically different from adults. A child’s brain tissue / bone marrow has different electrical conductivity properties than adults due to the higher water content (this renders the Specific Absorption Rate obsolete). Children’s absorption of microwave radiation can be ten times higher than adults. Permanent low-level microwave exposure can induce chronic nitrosative and oxidative ‘stress’ thence, damage the cellular mitochondria (mitochondropathy). This ‘stress’ can cause irreversible mitochondrial DNA damage (mitochondrial DNA is ten times more susceptible to oxidative and nitrosative ‘stress’ than the DNA in the cell nucleus). Mitochondrial DNA is irreparable due to its low histone protein content, therefore any damage (genetic or otherwise) can be transmitted to all successive generations through the maternal line.

Hence, we are subjecting each successive female generation to harm. Whether these two ten-fold increases ‘merge’ to become 57.7% or are additional, thence equal 67.7% of those to suffer, is a moot point. Either way we are facing the equivalent of a pandemic.

I was invited to present a lecture at Brighton University recently and one Doctor commented on a +60% foetal birth rate damage from exposed farm animals. All mammalian species will of course suffer the same consequence resulting from low-level microwave irradiation. There is very little difference ‘biologically’ between our embryonic cells.

Imagine you are five years old, in school and sitting with a Wi-Fi laptop near your abdomen. Theoretically, your ovaries can become irradiated until you leave school at aged 16-18 years old. When you become pregnant, every one of your follicles (to become eggs) will have been microwaved. Hence, you may or may not deliver a healthy child.

Should you become a pregnant as a student, your embryo (for its first 100 days ­ if it is female) is producing approximately 400,000 follicles (within its ovaries) for future child-birth.

The problem is that these developing follicle cells do not have the cellular protection of mature adult cells. Consequently your ‘grandchild’ may have had every single follicle cell irradiated and damaged prior to its conception. Therefore when your child becomes an adult (with its irradiated follicles) there is a greater likelihood of its child (your grand-daughter) suffering the ailments previously mentioned, during conception / embryonic and foetal development stages.

The shocking truth is, not only was all of this known and documented long before Wi-Fi was ever put in front of children, but the dangerous biological effects were concealed (as they are to this day) from the general public, in order to protect the industries profit.

This document was classed as ‘Top Secret’ and its contents withheld by WHO and ICNIRP (International Commission on Non-Ionizing Radiation Protection).

Eldon Byrd, a scientist for the Naval Surface Weapon Centre of the US Navy, in one of his 1986 lectures on the effects of low-level microwaves, is referenced as stating: “we can alter the behaviour of cells, tissue… cause up to six times higher foetus mortality and birth defects…”

Finally, the Mobile Telecommunications Industry carried out a very thorough and exhaustive scientific study on its own product. This industries conclusion was: “…It can be concluded that electro-magnetic fields with frequencies in the mobile telecommunications range do play a role in the development of cancer.”
“…Direct damage on the DNA as well as influences on the DNA synthesis and DNA repair mechanisms…”
Note: DNA synthesis is essential for healthy embryonic / foetal / child’s growth. 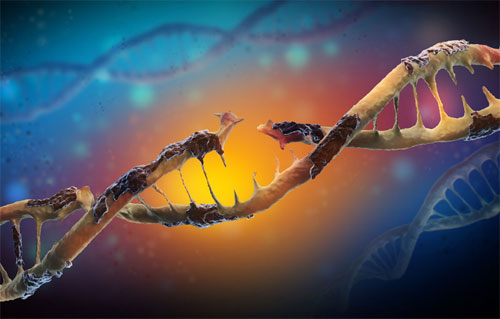 With these few of the roughly 8,000 research articles showing this phenomena; in order to protect this industries’ profit, the United States Defence Intelligence Agency sent a “document” to “advanced nations” describing the problem and suggesting “how to deceive the public”.

It reads: “…if the more advanced nations of the West are strict in the enforcement of stringent exposure standards, there could be unfavourable effects on industrial output… exposed to microwave radiation below thermal levels experience more…”
Industrial output is of course… profit. A very relaxed exposure standard also makes it very difficult to take the industry to court.

In order to appease the US Government, some Governments adopted the ICNIRP guideline, whereby, the only safety limit is just six-minutes of warming. Which means: if you do not feel too warm in six minutes, Wi-Fi is deemed to be safe.
No consideration at all has been given to the published ‘below thermal’ cellular interaction as listed by several countries including the United States; which were (and are) known to cause: cancer, severe neuropathological symptoms, foetal defects and literally hundreds of illnesses related to cellular disorders.
Countries following ICNIRP continue to argue that their six minute warming effect is all that is required regarding microwave irradiation.

Should the reader be wondering whether I am as mad as a box of frogs and thinking “no government would ever harm its citizens for money, especially pregnant women”; I invite the reader to investigate Government decisions behind smoking, asbestos, BSE (mad-cow disease), lead in petrol, experiments on 20,000 UK serving military personnel serving in the 1960s, thalidomide and of course Agent Orange sprayed over the food crops in Vietnam. To this day, many global birth defects stem from these Government / Government Scientific / Military decisions: with industrial advisors.

Progress on the study of illnesses caused by low-level microwave irradiation continues to this day, including one current study on cancer and neurological harm that involves women who could be pregnant.
Progress reports are also fed back to governmental scientists: “…students will understand the nature of RF… bioeffects research, including human / animal studies… students will become familiar with current state of knowledge on potential health effects RF, such as cancer, memory loss, and birth defects.”
RF has become a generic term (Radio Frequency) to avoid using the term ‘microwave’. It poses less ‘safety queries’ as the word ‘radio’ itself, which used to refer to ‘long wave radio’ was domestically non threatening.

Governmental Intransigence forces a moratorium upon the risks of exposure to future generations. Both the Communications Industry and Governmental studies have proved that protein synthesis (the using of chemical structures to ‘build’ the roughly 4050 foetal and 4500 adults designated biological / neurological structures) can be influenced by low-level microwave irradiation. This moratorium seems to spread to organizations either relying on Governmental funding, or for whatever reason; acquiescence. However, not all research departments suppress the truth. 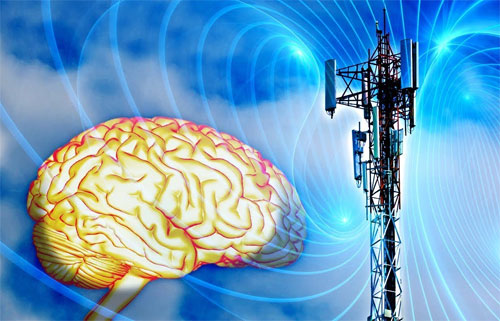 The Main Risks to Children

Blood Brain Barrier – requires 18 months to form and protects the brain from toxins. It is known to be effected.

Myelin Sheath – requires 22 years to build its 122 layers. It is responsible for all thinking, organ and muscle processes.

Brain – requires 20 years to develop (I can assure you, cell phones do not help in its development).

Immune System – requires 18 years to develop. Bone marrow and bone density are known to be affected by low-level microwaves as are the immune systems’ white blood cells.

Clearly, our decision makers are overlooking a child illness pandemic hitherto unknown in our 40,000 generations of civilization; which can involve over a half of the World’s exposed mothers / children.