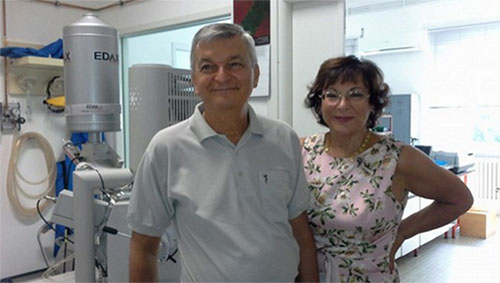 In the 90s, Dr. Antonietta Gatti discovered the relationship between micro- and nano-particles as well as a great number of pathologies: cardiovascular diseases, many forms of cancer, multiple neurological diseases, and autoimmune diseases. She’s taken part in many international research projects, including the pathologies induced by depleted uranium, waste incineration, food polluted with inorganic particles, and more.

Currently, she is the coordinator of the Italian Institute of Technology’s Project of Nanoecotoxicology, called INESE.
She is also a selected expert of the FAO/WHO for the safety in nanotechnological food, and a Member of the NANOTOX Cluster of the European Commission and the author of a book titled Nanopathology: the health impact of nanoparticles, and on the Editorial Board of Journal of Biomaterials Applications and a member of the CPCM of the Italian Ministry of Defense.

Furthermore, she and her husband Dr. Stefano Montanari founded a laboratory called Nano-diagnostics for the evaluation of the pathological tissues of patients, it’s presently at the University of Modena and Reggio Emilia, Italy.
Recently, the Italian police raided their home, the police took all digital assets that were owned by the two nanopathologists, including laptops, computers, and flash-drives, basically years of work and research.

James Grundvig via the World Mercury Project describes what happened quite well: “Because Gatti and Montanari had taken their research of nanodust and nanoparticles, from in-vivo (performed in a living organism) and in-vitro (performed in a test tube) to what unseen contamination might reside in vaccines in 2016, they came under the microscope of the United States, European, and Italian authorities. They had touched the third rail of medicine. They had crossed the no-go zone with the purported crime being scientific research and discovery. By finding nano-contamination in random vaccines, Gatti and Montanari revealed, for the first time, what no one knew: Vaccines had more than aluminum salts adjuvants, Polysorbate-80, and other inorganic chemicals in them, they also harbored stainless steel, tungsten, copper, and other metals and rare elements that don’t belong in shots given to fetuses, pregnant women, newborns, babies and toddlers developing their lungs, immune and nervous systems.” 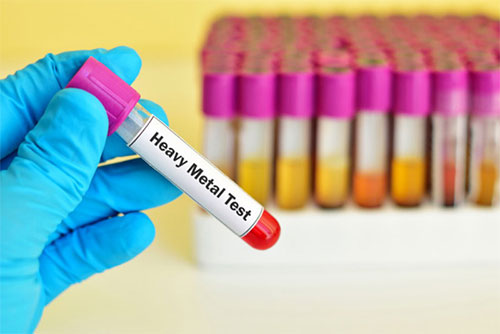 The scientists published their work in January of 2017, a study titled New Quality‐Control Investigations on Vaccines: Micro‐ and Nanocontamination. If science wasn’t plagued by corruption, an investigation should have started, healthcare agencies would have become involved and vaccine safety policies would have come under intense scrutiny, but that never happened.

Below is a recent interview with the two, done by Surêté Vaccins. The quick description of the video reads: “Two Italian researchers have found nanoparticles are polluting almost all vaccines. The small size of these particles allow them to enter our cells and have a permanent inflammatory effect. Mrs. Gatti was about to testify in parliament enquiry on vaccine damages of Italian military courses but both researches have been raided by police and all their material has been taken away.”

Nano particles are very small bits of matter, and they can enter into the human body, as the pair of scientist discovered in the 90s. This is why we have so much published research linking various chemical products, like cleaning agents, to the destruction of human health. These nano particles are produced by waste incinerators, car traffic, and many other different ways. Because they float in the air, we can inhale them, which means they enter our lungs and then enter into the blood within minutes. This leads to a number of problems. These particles are carried by the blood to every district of the body, as they explain in the video below. When they enter into the tissues, the body cannot get rid of them, and so those particles stay there forever and are the cause of various diseases we see today.

The two scientists explain how they’ve been analyzing and studying vaccines for the past 15 years.
“Both vaccine and the tissue, which was hit by the particles contained in the vaccines, because we discovered that those vaccines were polluted by particles, those particles were contained equally in the vaccine and in the tissue, so we started to analyze vaccines.”
They go on to explain, with regards to their most recent vaccine study linked above: “After a while, an Italian University sent us a student for her thesis, and we analyzed 19 different vaccines with the university, finding all of them polluted by micro and nano particles. Then we went on analyzing them and now we analyzed about 30 vaccines with many samples of each vaccine, and we discovered that they were all polluted…”

When all said and done, they analyzed 44 different vaccines. All of them contained these harmful particles, which are foreign bodies entering into the human body. Whenever this happens, the human body has a reaction, and it’s not good.
“Those foreign bodies, those particles, are like a bullet. If I shoot somebody, and that bullet makes a hole in the heart, it’s not very important if the bullet was made of stainless steel, of titatium, of iron whatever, what’s important is that that they punched a whole in the heart.”

In the case of medicine, a lot of information has emerged showing just how much corruption really goes on in the industry. The Editors-in-Chiefs of several major medical journals have been quite blunt, with perhaps one of the best examples coming from Dr. Richard Horton, the current Editor-in-Chief of The Lancet, who says: “The case against science is straightforward: much of the scientific literature, perhaps half, may simply be untrue.”

Dr. Marcia Angell, a physician and longtime Editor-in-Chief of the New England Medical Journal (NEMJ), also considered one of the most prestigious peer-reviewed medical journals in the world, alongside The Lancet, has said that: “It is simply no longer possible to believe much of the clinical research that is published, or to rely on the judgment of trusted physicians or authoritative medical guidelines. I take no pleasure in this conclusion, which I reached slowly and reluctantly over my two decades as an editor of The New England Journal of Medicine.”

John Ioannidis, an epidemiologist at the Stanford University School of Medicine, published an article titled Why Most Published Research Findings Are False, which subsequently became the most widely accessed article in the history of the Public Library of Science.

Here is another great quote by Arnold Seymour Relman (1923-2014), Harvard professor of medicine and former Editor-in-Chief of The New England Medical Journal: “The medical profession is being bought by the pharmaceutical industry, not only in terms of the practice of medicine, but also in terms of teaching and research. The academic institutions of this country are allowing themselves to be the paid agents of the pharmaceutical industry. I think it’s disgraceful.”

Other Examples Of Corruption

In 2016, a group of scientists in 2016 at the CDC named, SPIDER (Scientists Preserving Integrity, Diligence and Ethics), put out a list of complaints in the form of a letter to the CDC’s Chief of Staff, where they say: “It appears that our mission is being influenced and shaped by outside parties and rogue interests… and Congressional intent for our agency is being circumvented by some of our leaders. What concerns us most, is that it is becoming the norm and not the rare exception.”

This was covered by several activists, from Robert F. Kennedy Jr. to another article from the Huffington Post, but unfortunately it received little to no mainstream media attention.

Shortly before this, and perhaps even more shockingly, is the whistleblower testimony from a senior CDC scientist, who has authored multiple commonly cited studies that show no link whatsoever between the MMR vaccine and autism. In fact, one of his studies, published in 2004, is the most commonly cited study used to debunk the link between the MMR vaccine and autism.

His name is Dr. William Thompson, and he bravely told the world that it was “the lowest point” in his career that he “went along with that paper”. He said that the authors “didn’t report significant findings” and that he is “completely ashamed” of what he did, that he was “complicit and went along with this”, and that he regrets that he has “been part of the problem”. 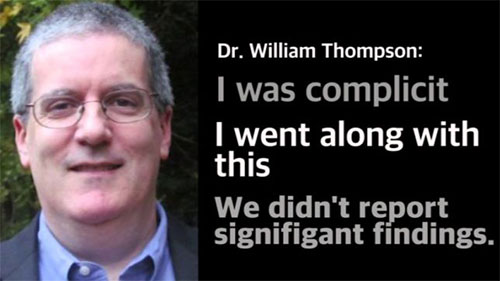 Here is an official statement from Dr. Thompson describing the situation in his own words. This is perhaps the best source of information regarding this matter.
These are only a few examples out of many.

We are living in a time of great transparency, a lot of new information is coming out that’s completely countering what we’ve been told, and some rather ghastly examples of scientific fraud have been made, it’s not just with vaccines.
Information like this, unfortunately, can create a divide among the population, with one side spewing venom at the other, using terms like “anti-vax” or “pro-vax”. At the end of the day, these labels and the way we argue over them doesn’t really solve anything. If all we do is react with emotions when it comes to such important topics, we might as well not even have a conversation about them at all.

All of us have to wake up and realize that nothing is set in stone, and the way we do things here is constantly changing. There is no denying the fact that corporate/government funded media is severely fraudulent and basically presents one side of the coin.
The media pays absolutely no attention to vaccine research that does not fit the narrative of their owners. Something is seriously wrong here, and there are more than enough opportunities to see it.

The key here is to disseminate information in a peaceful manner, and remember, you still have the choice with regards to the decisions you make about your health, and the health of your child or loved ones.
Don’t be afraid to think for yourself.

“The main reason we take so many drugs is that drug companies don t sell drugs, they sell lies about drugs. This is what makes drugs so different from anything else in life… Virtually everything we know about drugs is what the companies have chosen to tell us and our doctors… the reason patients trust their medicine is that they extrapolate the trust they have in their doctors into the medicines they prescribe.

The patients don’t realize that, although their doctors may know a lot about diseases and human physiology and psychology, they know very, very little about drugs that’ve been carefully concocted and dressed up by the drug industry… If you don t think the system is out of control, please email me and explain why drugs are the third leading cause of death… If such a hugely lethal epidemic had been caused by a new bacterium or a virus, or even one-hundredth of it, we would have done everything we could to get it under control.” – Dr. Peter Gotzsche, co-founder of the Cochrane Collaboration.

Why Is The Co-Founder Of WhatsApp Telling Everyone To Delete Facebook?