Renowned activist and author Michael Pollan illustrated in 2014 how McDonald’s insists on using Russet Burbank Potatoes, a potato in America that is unusually long and difficult to grow. 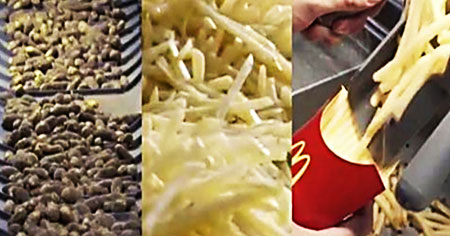 They further insist that their potatoes have no blemishes at all, which is hard because these potatoes commonly suffer from what is referred to as net necrosis, which causes unwanted spots and lines on the potatoes.

If they have this, McDonald’s won’t buy them and the only way to eliminate this is through the use of a pesticide called methamidophos (Monitor) “That is so toxic that the farmers who grow these potatoes in Idaho won’t venture outside and into their fields for five days after they spray.”

When McDonald’s is ready to harvest their potatoes, they have to put them in giant atmospheric controlled sheds the size of football stadiums because they are not edible for six weeks. “They have to off gas all the chemicals in them.”

Fast foods share more in common with drugs than people would like to think; they can be extremely addicting and extremely harmful. Places like McDonald’s should not exist, and this video just added to the long, continually growing list of reasons against them.