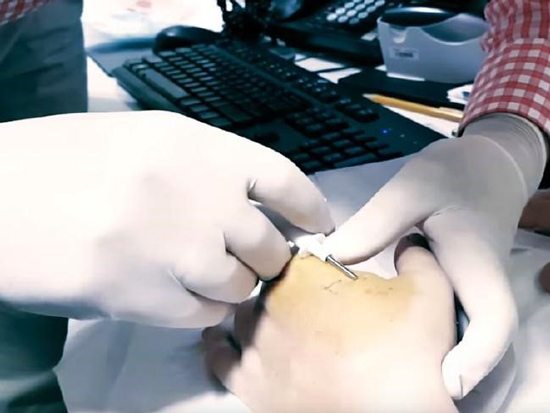 You may not have noticed, but there are two kinds of countries in the world these days: dictatorships led by authoritarians and democracies that are slowly being taken over by authoritarians. Put Australia into the latter.

The land Down Under has become the first nation to begin microchipping its citizens, though NBC News predicted some years ago that, by 2017, Americans would all be microchipped.
Australia’s drive to implant citizens with what many believe is the Biblical “mark of the beast” is “a clever propaganda campaign that equates RFID microchipping with becoming superhuman, and people are begging for it,” News.com.au noted.

It’s All About ‘Convenience’

One Australian woman, Shanti Korporaal, from Sydney, is at the center of a controversy after having implants inserted in both hands. “You could set up your life so you never have to worry about any passwords or PINs,” she told News.com.au.
The idea is that microchip implants give you a unique identifier, so your implant can be used to get into locked doors, transfer personal information to smart phones and other personal devices – and, of course, allow you to be tracked everywhere you go by government.

Why would anyone voluntarily want to do that? One word, says one microchipping recipient: “Convenience”.
As bad as it is to carry cards around that transfer personal and financial data to massive (hackable) databases and smartphones that serve as personal tracking devices – again, out of convenience – you at least have the option (for now) of leaving them behind when you go somewhere.

You don’t have to take a smartphone with you, or at minimum you can learn some ways to better protect your information. With cards, if you must carry them, there are devices you can use to essentially shield them from ID thieves and tracking devices.

But once you put a tracking device under your skin, the only way to get rid of it is to have it surgically removed, or hack off your limb. Would authorities actually track you for no reason? It’s already being done.

In April 2012 it has been reported that American police departments were tracking cell phones without first getting a warrant, as required by the Fourth Amendment to the US Constitution. In fact, the American Civil Liberties Union found that “many” of nearly 200 departments surveyed did so sans warrant.

While some departments were getting the required warrant first, others “said they use varying legal standards, such as a warrant or a less-strict subpoena.”

Why Make it Easier to Track You?

The practice has continued. The Boston Globe reported that the city’s police department had used “a controversial cellphone technology 11 times over the past seven years without once obtaining a search warrant”.

Another major problem is hacking and identity theft. In the NBC News report of several years ago, reporters noted that one of the “problems” that could be solved had to do with medical information: “Chips would allow doctors and hospitals to have access to your identity and medical record if you were unconscious and unaccompanied upon admission” (and how often does that happen?).

But medical information is a top target of hackers and identity thieves. In fact, health care information is the most coveted by cyber thieves because data contained in health records – prescriptions, Social Security numbers, addresses, etc. – are much more permanent than, say, financial data (which is changed once a hack has been detected).

Privacy in a digital world comes at a premium as it is. Our retinas are scanned, our wallets are scanned, our online data is hacked and our movements are already being tracked – both by government and by private corporations.

But all of those methods can be mitigated. It’s very difficult to mitigate personal tracking when you’re carrying the tracker inside your body.
The point is, if government can track you 24/7/365, government can control you as well.

Australia: A Tracking Device In Every Car

Australia seems to be embracing the NWO Agenda 2030 with sickening enthusiasm! Microchipping, compulsory vaccination, and this: “Police say they want every vehicle in the state to be fitted with a tracking device to stamp out motor vehicle theft. While the numbers are coming down, Victoria has the highest number of car thefts in the nation.

Assistant Commissioner Robert Hill has told Justin and Kate tracking devices will be fitted to about 1000 cars under a 12-month trial beginning in September. They will then evaluate the best technological option before a statewide roll-out. Tracking itself is not new technology – in fact phones allow Uber users to track their cars.”