Your Medicine is in Your Pantry

Food has been the medicine of humanity since the dawn of time. Many herbs that we associate only with seasoning our food are, in fact, potent medicinal plants.

The distinction between herbal food and medicinal plants is actually quite subjective. There is a wide area of overlap with the two categories. If you think of all the plants we consume, for whatever purpose, as being on a spectrum, from food on one end, to medicine on the other, you will understand. On the food end would be plants like potatoes and carrots – potentially medicinal, but mild and safe. The other end of the spectrum contains medicine plants like foxglove, the source of digitalis – definitely not food, but clearly serious medicine. 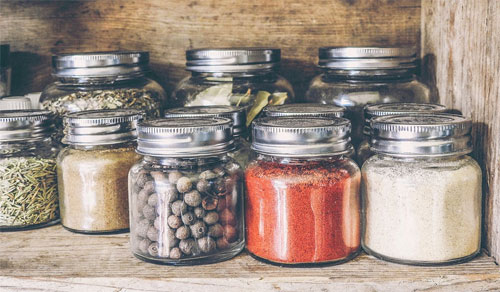 The gray area is in the middle. Take echinacea. None of us would consider sitting down to a delicious bowl of echinacea soup. But you could. And it would be safe. How about parsley? In a salad, it’s a food. Used as a juice to treat edema, it’s a medicine.

The truth is, herbal medicines have about the same chemical components as food plants. Herbal medicines are just selected from plants that have greater concentrations of active ingredients, making them more convenient to use.

European herbal medicine, the tradition from which contemporary American herbalism mainly derives, does not see much overlap between food plants and herbal medicines. Foods you eat, spices make the food taste better, and herbal medicine you take in a tincture. Asian medical systems, however, make no distinction between the two. Food is just less concentrated herbal medicine, and every meal is viewed as a chance to get in more healing herbs. In fact, the Chinese word for the medicinal brew that people use daily to maintain their health is “soup”.

The complex cuisines of China and India began, thousands of years ago, as recipes to get healing herbs and foods into people. Gradually, as the process evolved, complicated mixtures of food ingredients, herbal medicines, and flavorings coalesced into a tasty amalgam that warms the soul, heals the body, and pleases the palate.

For example, Indian food typically starts with a combination, a “masala”, of onions, garlic, ginger, and other various spices, selected for their medicinal virtues, and taste. Since many of these herbs can cause gas, additional herbs, such as fennel and coriander seeds, are added to counteract that tendency. Ginger and mustard, for example, speed up the digestive process, so that the meal is efficiently processed and moved through the digestive tract.

Although the list of herbal medicine foods is huge, here is a selection of remedies that are easy to find, and particularly effective:

The carrot and parsley family (Umbelliferae), in particular, is a huge source of edible plants and good tasting medicines. These plants grow all over the world, and are used in a broad range of cultures. This group of plant medicines has unusual chemistry, so they make their way into the kitchens and medicine chests of many native medical systems. The seeds are typically the medicinal part, but various parts are used, depending on the plant. Some well-known members of this family include parsley, coriander (cilantro is coriander greens), fennel, anise, cumin, and dill.

Plants in this family contain compounds that act like calcium channel blockers, benefiting angina. Herbs in this family generally have estrogenic action, especially the seeds. The popular Chinese herb dong quai is in this family. These parsley relatives are prized around the world for treating intestinal gas, a property herbalists call “carminative.”

Many naturopaths pick fennel seed as the premiere carminative in the world, especially for adults. Most cases of painful gas are relieved by fennel seeds, provided of course, that the dose is high enough.
Fennel contains creosol and alpha-pinene, substances that loosen lung mucus and help clear the chest, benefiting asthma. Recent research shows that this spice also lowers blood pressure.

This medicinal plant has been used for centuries to promote lactation, which makes sense, from what we now know about its hormonal action. It will also hasten a period. As a bonus, it increases libido.

For gas, chew 1 tbs. of the tasty seeds, or brew a tea with 1 tbs. seeds in a cup of water. You may use the powdered seeds as a seasoning, or in capsules.
Of course, you can also steam the stalk as a delicious celery-like vegetable. The properties are similar, but milder than the seed.

Dill seed is, for gas, for children, what fennel seed is for adults. Called “the secret of British nannies,” dill is the active ingredient in the famous “gripe water,” the colic remedy taken round the world in the British empire.

Dill seed is truly miraculous for infant colic. It can save a parent’s sanity. Dill promotes menstruation. For adults, dill, along with fennel, treats heartburn. The weed is milder. In a pinch, fennel and dill can be interchanged.

For infant colic, brew 2 tbs. dill seed in 1 cup of water, cool, sweeten, put in a bottle or dropper, and serve to the screaming baby. You will carry a sleeping tyke back to bed. 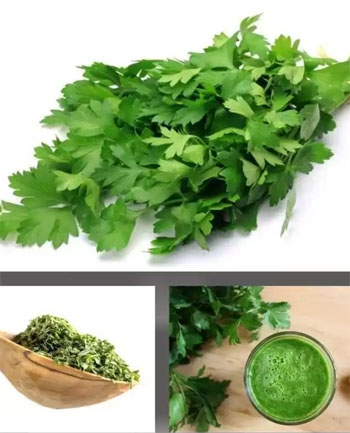 Ever notice that green sprig of garnish at the edge of your plate? Usually discarded, that parsley is one powerful herbal medicine. While the seeds, leaf, and root of this plant are all used for food, the main herbal uses come from the leaf.

Parsley is a source, as you might expect, of phytoestrogens, so it has potential for treating osteoporosis and amenorrhea, and for promoting lactation.
This medicine has a long history of use with the urinary system. Research shows that it is diuretic, and it has a long history of herbal use in treating bladder infection.

Parsley treats angina. Crushed, and applied to a bruise, it heals. It inhibits the release of histamine, so is useful for allergies and hives. It prevents and treats kidney stones.

Parsley is a treasure trove of vitamins and minerals. It is a rich source of boron and fluorine, critical minerals for bone health. It contains 3.5 times as much vitamin C as oranges, and twice as much calcium as broccoli.
Because parsley is a rich source of calcium, magnesium, and potassium, it is an effective treatment for cramps, such as leg cramps.

Three ounces of parsley contains about 3 mg of boron, the dose suggested for bone health. A dose of about 2 ounces per day of parsley juice treats edema very well.

Parsley leaf is widely available in capsule form, both as a single herb, and in combination. It works well as a digestive aid combined with turmeric. A typical dose would be 2-9 grams per day, but, of course, this herb is very safe at any dose.

Thyme contains anti-aging chemicals. Historically, this herb has been used for headache.

Thyme is known as a general antimicrobial, especially for bacterial infection, and an expectorant, which also treats fever, so it is a well-known treatment for diseases like the flu.

One ingredient, thymol, has antiviral properties, and is also antispasmodic, so it is used in headache and cramps.

Use thyme as a tea, or gargle.

Originally from India, this spicy herb has grown to great popularity around the world. There are many varieties of the plant, but they all basically have the same medicinal qualities. One famous variety, “holy” basil, is a standout in the Ayurvedic pharmacopoeia. Historically, basil has been used as a digestive aid, to relieve gas and speed digestion, and to warm up and mobilize stiff arthritic joints.

Basil is a pungent herb that increases body heat. It is used to treat respiratory conditions, like the flu, and to lower fever by sweating. Since it’s also an expectorant, it can be used for conditions like emphysema and asthma.

Use basil liberally in food, such as pesto, or brew in tea. For a headache, try chewing several fresh basil leaves.

The herb is known only as a humble condiment in the West, but in Asia, it is considered to be the foremost detoxifier and anti-aging herb.
Black pepper is a warming digestive remedy, which has a carminative action. This plant increases circulation, and lowers blood pressure. This medicinal herb also contains compounds that prevent osteoporosis.

While black pepper has been esteemed as a detoxifier, particularly in Ayurveda, recent research has begun to bear this out. At least in rats, pepper seems to increase release of carcinogens through the liver, reducing cancer. Piperine, a main active ingredient, protects against liver damage almost as well as milk thistle. This alkaloid is also getting a reputation for increasing bioavailability and absorption of nutrients. For example, in one recent study, scientists measured the absorption of turmeric active ingredients. Administering the turmeric along with Piperine increased bioavailability by 154%, and reduced the time for absorption by half.

Black pepper reduces free radicals. It is antioxidant, and prevents the depletion of glutathione. It also prevents the destruction of other antioxidants, such as vitamin A. Pepper is used in Ayurveda to release sinus congestion. Black pepper is available in the health food store as a supplement. Use 50 mg per day or more of extract standardized to Piperine.

Use black pepper as a culinary spice. An excellent Ayurvedic preparation for sinus congestion is to boil 10 peppercorns in milk, strain, and drink. 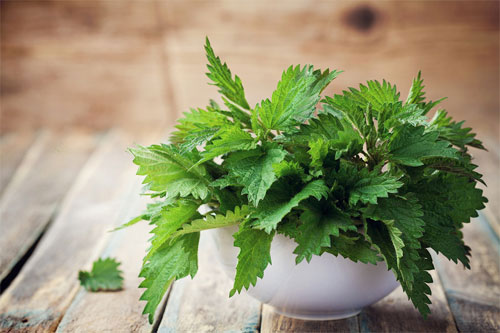 That’s right – the stinging nettles you dig out as a pesky weed. Even though less well-known as a food in the West, nettles are quite edible and tasty. The sting is neutralized when the plant is dried or cooked. This vegetable is prepared like spinach, and has a similar, but saltier taste. Please don’t harvest this vegetable unless you know what you are doing – the sting, before being neutralized, is painful.

Nettle is a favorite of European herbalists, who use it as a general nutritive tonic, similar to the way alfalfa has been used in American herbalism. In addition, it has been historically used to treat childhood eczema, respiratory conditions, and to strengthen the circulatory tissue.

Recently, nettle has been getting attention in natural healing circles for the treatment of allergic rhinitis (hay fever). You will find nettle in the health food store in capsules. Most people find that about 2 grams will relieve an allergy attack.

This little legume is getting a lot of attention lately for its many medicinal virtues. It is a very rich source of soluble fiber. It is a very effective diabetes treatment, promoting substantial reductions in blood sugar, both from its fiber content, and the presence of other metabolically active components.

Fenugreek seed lowers total cholesterol, while increasing HDL. It contains very high amounts of choline and beta carotene, both of which have been linked to Alzheimer’s prevention and treatment. Fenugreek contains the phytoestrogen diosgenin, which has gotten attention lately for its role in preventing breast cancer.

Use fenugreek liberally as a spice in foods. The dose shown in experiments to control blood sugar was much higher, about 100 grams per day. That’s a lot of fenugreek, which can be bitter in those quantities. In scientific studies, the fenugreek seed was often baked into a flat bread, or cooked into a soup. Another way to take it is to soak the seeds overnight to soften, and then chew them, perhaps mixed with a mild food like oatmeal.

However, one recent study showed significant reduction in total cholesterol and triglycerides with a dose of 2.5 grams twice daily, a dose that can easily be taken in capsules. Fenugreek can be found in the health food store as whole powdered herb in capsules, or as a standardized extract.

With such a rich selection of healing foods to choose from, there should be little problem putting together a menu of delicious medicinal recipes. Use these foods daily. You’ll like making you cupboard in to your medicine chest.