Crop circles, elaborate patterns found in farmer’s fields, continue to fascinate people worldwide. Although some have been elaborate hoaxes, others remain a mystery, tangible and real yet unexplained. The first simple crop circles started to become a regular phenomenon when they appeared in the southern English countryside in the summers of the 70s.

Ever since they seem to have become more and more elaborate. Some people believe the intricate geometric patterns are messages sent from higher intelligence, extraterrestrials, or even time travelers. One Italian inventor, Umberto Baudo, believes crop circles may be meant to impart secrets of new technology and free energy to humanity. 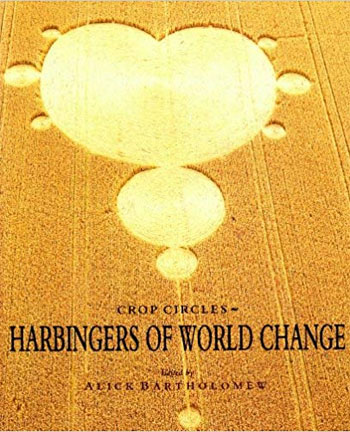 In 1991, a book titled Crop Circles: Harbingers of World Change, by Alick Bartholomew, was published. It explored the idea that some crop circles could be messages from non-human intelligence from beyond this physical world. Maybe the formations were meant to deliver secrets for new advanced technology. In the book, an English historian and psychic, Isabelle Kingston, suggested that crop circles might reveal a molecular structure or blueprint for a new form of energy that would one day be unraveled by scientists.

It was the same year that two British men came forward to take credit for creating hundreds of crop circles: Doug Bower and Dave Chorley. As more and more crop circles are discovered, the idea that they could be messages from aliens persisted. Crop circles became more and more elaborate, and some believe they can’t all be chalked up to a hoax.

If crop circles are an intended message, than what is it?

In 2008, Umberto Baudo decided to use crop circles as an inspiration, a blueprint for a mechanism that he believed could deliver a source of free energy, similar to the ultimate goals of Nikola Tesla. Baudo’s work, like that of Tesla’s plans for free energy, has remained obscure, but now with a translation from researcher Pedro M. Duarte, we can look at his findings with English captions in the video below in the article.

Baudo recognizes that some crop circles are hoaxes, but among the hundreds of images found, he chose the formations he believes represent authentic energy generating systems. He demonstrates that those formations can operate like the gears of a machine.

“Since 2008 I realized that it is absolutely possible to generate free energy to all of the planet, and instead of having to pay large amounts of money to have in exchange [for] a small amount of energy,” said Baudo.

In Baudo’s first experiments, he attempted to create magnetic motors. The prototypes were arrays of circles based on crop circle formations. His work progressed from magnetic systems to systems using centrifugal force and tested using computer simulations. The simulations allowed him to find out what happens when the shapes are rotated at high speed, generating energy both with and without the variables of gravity and counterweight mechanisms: magnets, springs, and chains.

Baudo believes extraterrestrials chose to communicate with crop circles for a reason.
“It’s important to understand that the Crop Circles are the maximum expression of a message because through an image you can communicate much more than with words without any doubt,” he explains. “…especially if the message [is addressed] to someone that does not speak our language.”

The inventor found that the rotating systems could whirl around an “eccentric core,” shapes he recognizes in many crop circle formations. Spinning around this core, the circular shapes generate momentum.

In the second part of the video (below in the article), Baudo is convinced that crop circles are meant as examples of using centrifugal force and that he has decoded their meaning. With modifications, including the addition of a spring, he says he has created perfect models that continue to build momentum even after the engine is turned off. All thanks to centrifugal force.

“After some years studying and researching, always with these images in my mind, finally I think I’ve found the key to understand the [main] part of these crop circles. The main key to understand it is fundamentally one: The centrifugal force. Just like that!” 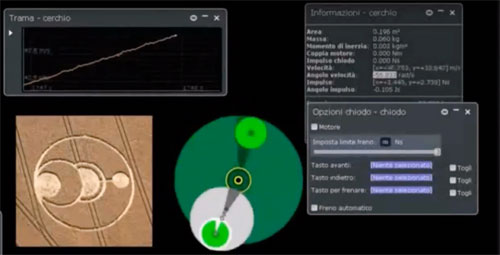 “The speed will increase, always in a constant way, until the spring achieves its maximum. In that moment [it] will stabilize,” he explains.

Although many people remain skeptical, he believes that these systems can work against the first principle of thermodynamics that states the total energy of an isolated system is constant. Instead, the engine he simulates continues to accelerate, while the “eccentric core” of the disc appears distorted into an oval shape.

In part 3 (below in this article), Umberto Baudo has advanced beyond the computer simulations to create the mechanics of the centrifugal motors in three dimensions. We see his team working to test the pieces cut out of metal, and in the latter part of the video in English, he discusses his findings with a man who puts him in contact with experts in America. From here, we are left to wonder what happened next. 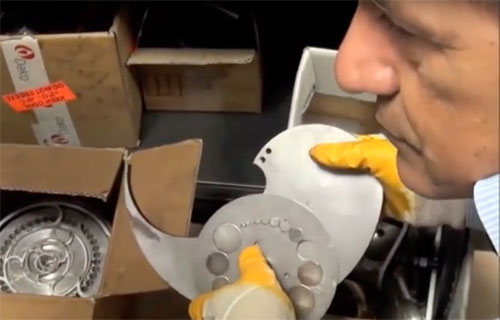 What happened to Umberto Baudo’s designs? If he had been successful, surely we would know about it, right? Yet delivering a source of free energy to the world would most likely be met with incredible resistance in a world where economies revolve around monetized methods of energy delivery. Finding a source of unlimited free energy would change the global economy, freeing people from the need to labor endlessly to pay energy bills.

Will Baudo’s ultimate findings remain a mystery, like crop circles? Like Nikola Tesla’s plans to deliver free energy to the people? Are beings with higher intelligence trying to tip the odds in the common person’s favor, allowing us to finally have such technology distributed to everyone worldwide?

Your Medicine is in Your Pantry