Onions are a staple ingredient in the kitchen. These superfoods belong to the Allium family of flowering plants, and are cousin to another kitchen staple – garlic. Onions are rich in powerful sulfur-containing compounds responsible for their pungent smell, as well as their health benefits. Whether it’s white, yellow, red or purple, and green – all onion varieties are shown to be a healthy addition to your diet. 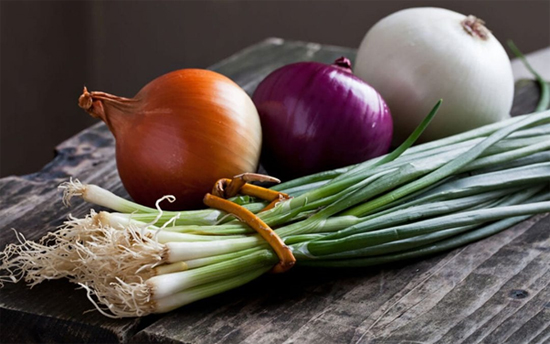 1. They are rich in antioxidants – Onions are loaded with potent antioxidants. They provide dozens of different types, including quercetin, which is a powerful anti-inflammatory compound.

2. They may prevent cancer – You can avoid the threat of cancer by simply adding more onions to your diet. A study published in the American Journal of Clinical Nutrition examined how often people in Italy and Switzerland consume onions and garlic. Researchers found that those who consumed the most onions and garlic had the highest reduction in cancer risk. They concluded that the more onions and garlic people consumed, the lower the cancer rate.

6. They enhance the benefits of tomatoes – If you’re eating tomatoes, eat them with onions. Eating these foods together can enhance their benefits. Researchers believe that sulfur compounds in onions increase the absorption of lycopene, an antioxidant commonly found in tomatoes that are known to prevent cancer and heart disease, as well as support brain, bone, and eye health. Tomatoes and onions make a delicious pair in omelets, salads, sautes and soups.

To reap the maximum health benefits of onions, you need to cook them right. Cooking methods affect the nutrient composition of onions. Some destroy certain nutrients, while others enhance nutrient content. Still, onions are healthy whether they’re raw or cooked. However, raw onions have higher levels of organic sulfur compounds that offer many health benefits.

If you prefer onions cooked, avoid cooking them longer than 30 minutes to avoid destroying most of the onions’ beneficial compounds. One of the most delicious ways to eat onions is to caramelize them. They can be added to salads, sandwiches, sauces, or pizza.

When peeling an onion, you may want to be careful to remove as little of the edible part of it as possible because the outer layers of an onion flesh contain the highest levels of flavonoids, according to a study in the Journal of Agricultural and Food Chemistry.

The depressing connection between air pollution and happiness

Who created Facebook? New letter from alleged insider claims Zukerberg is a frontman for military intelligence