The depressing connection between air pollution and happiness

The air you breathe may affect your mood and happiness. A study published in the journal Nature Human Behaviour found that air pollution may be contributing to low levels of happiness among people living in major cities in China. 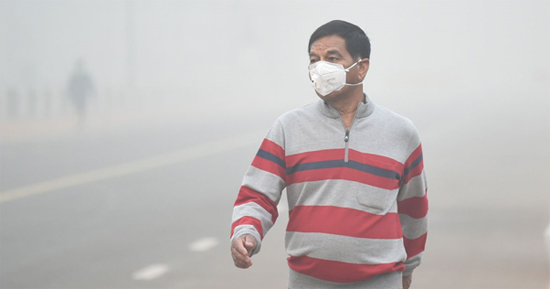 Although China has an annual economic growth rate of eight percent, the level of satisfaction of the country’s urban population has not increased as much as would be expected. Air pollution, inadequate public services, increasing house prices, and concerns over food safety have affected the quality of life in China’s major cities.

Researchers at Massachusetts Institute of Technology (MIT) wanted to explore a broader range of effects of air pollution on the everyday lives of people living in highly polluted cities in China. To do this, they used data on urban levels of ultrafine particulate matter – PM 2.5 concentration – from the daily air quality readings released by the Ministry of Environmental Protection in China. In Chinese cities, airborne particulate matter has become the main air pollutant, and PM 2.5 particles, which are only 2.5 microns in diameter, are dangerous to the lungs.

“Pollution also has an emotional cost,” said Siqi Zheng, an associate professor at MIT who led the research team. “People are unhappy, and that means they may make irrational decisions.”

The researchers also measured the daily happiness of people for each city using a machine-learning algorithm that assessed the 210 million geo-tagged tweets posted between March and November 2014 on Sina Weibo, China’s largest microblogging platform. The happiness index ranged from 0 to 100, with “0” indicating a very negative mood and “100” indicating a very positive mood. Lastly, the researchers combined this index with the daily PM 2.5 concentration and weather data.

“Social media gives a real-time measure of people’s happiness levels and also provides a huge amount of data, across a lot of different cities,” said Zheng.

The results showed that there was a significantly negative association between pollution and happiness levels. Moreover, the researchers found that people with higher incomes and women in particular were more sensitive to higher pollution levels than men.

The researchers also considered the type of cities the tweets came from and found that people who live in both the cleanest and the dirtiest cities in China were the most severely affected by pollution levels. They believe that this may be due to the fact that people who are particularly concerned about their health and air quality tend to move to clean cities. On the other hand, those who live in very dirty cities are more aware of the damage to their health caused by long-term exposure to pollutants.

Another study showed that air pollution affects the mental health of a person. Published in the journal Psychiatry Research, the study reported that children who grew up in areas with higher air pollution tend to develop major depression by the time they reach the age of 18.

Researchers from the U.K. combined data from a group of children in London with high-resolution data on air pollution levels. They measured symptoms of anxiety, depression, conduct disorder, and attention-deficit hyperactivity disorder (ADHD) in children ages 12 and 18. In addition, they took into account other factors that could affect mental health, including family history of mental illness, bullying, smoking habits, and level of income.

Their results showed that children who grew up in the most polluted areas at age 12 were three to four times more likely to develop depression at 18 than those who lived in the least polluted areas. Anxiety and ADHD were not associated with air pollution. Given the effects of exposure to high levels of pollution at an early age on mental health, the researchers believe that substantial efforts should be invested on reducing pollution in urban areas to decrease the damage it can cause to people’s physical and emotional well-being.