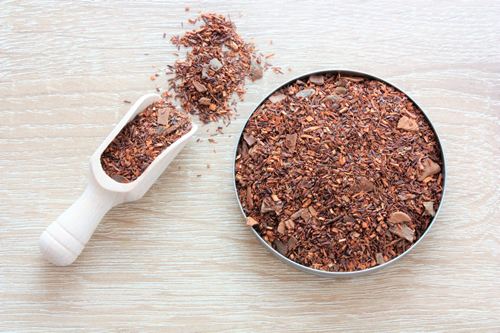 Cinnamaldehyde, the flavonoid that imparts a characteristic odor and flavor to cinnamon, causes the transcription factor called nuclear erythroid 2-related factor 2 (Nrf2) to translocate to the cell nucleus and bind to a sequence known as the antioxidant response element (ARE), which “regulates the expression of a large battery of genes involved in the cellular antioxidant and anti-inflammatory defense as well as mitochondrial protection”. Activation of ARE, in turn, stimulates glutathione production and induces expression of phase II enzymes to promote detoxification. Not only does this cinnamon compound have the chemopreventative potential to protect cells from the toxic effects of chemotherapy drugs, but it also may support the detoxification of air pollution.

In addition, rooibos and honeybush macerates have been demonstrated to significantly augment activity of phase II enzymes such as glutathione S-transferase, as well as increase the ratio of reduced to oxidized glutathione, both of which are important for limiting the damage done by heavy metals, free radicals, and lipid peroxides. In this way, these natural agents may be able to confer protection against the oxidative damage and mutagenesis resulting from particulate matter exposure.

A powerhouse botanical which prevents glutathione depletion is curcumin, a yellow compound in turmeric root. In a rat model, curcumin extract protected against liver injury after exposure to the toxic chemical carbon tetrachloride (CCl4) by improving levels of glutathione, superoxide dismutase, and glutathione peroxidase. As a result, damage to cell membranes, as indicated by lipid peroxidation, was reduced, and CCl4-mediated elevation in the liver enzyme AST was prevented. Curcumin has similarly been demonstrated to prevent mitochondrial dysfunction and reduce hepatoxicity induced by metals such as arsenic, lead, mercury, copper, chromium, and cadmium.

Along similar lines, ginger rhizome protects against liver fibrosis induced by the toxin CCl4 by significantly increasing glutathione and superoxide dismutase. In this study, ginger also significantly decreased levels of the mutagenic and carcinogenic compound malondialdehyde, indicating that ginger suppressed CCl4-mediated damage to lipids. Resveratrol, on the other hand, from foods such as grapes, blueberries, and cranberries, increases expression of the antioxidant enzymes superoxide dismutase and glutathione peroxidase in a concentration-dependent manner, which accounts for the vascular protective effects of this phytonutrient. In another in vitro study, both resveratrol and quercetin (a flavonoid found in plant foods such as apples and onions) increased levels of glutathione and antioxidant defense enzymes including superoxide dismutase, glutathione transferase, and glutathione peroxidase, as well as adiponectin, an anti-inflammatory signaling molecule secreted by fat cells.

All of these biomarkers normalized after daily supplementation with 500 mg vitamin C and 800 mg vitamin E, indicating that: “The antioxidant intervention was able to confer a protective effect of vitamins C and E against the oxidative insult associated with airborne contamination derived from coal burning of an electric-power plant”.

Consume More of the Most Antioxidant-Rich Foods 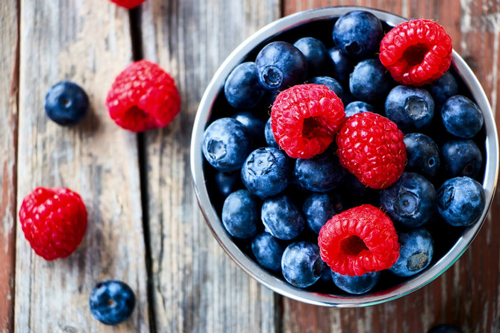 In addition to targeted supplementation under the guidance of a licensed physician, increasing consumption of colorful plant foods is a therapeutic strategy to increase antioxidant intake. Phytochemicals, or bioactive constituents derived from plants, can be classified as antioxidants due to their participation in redox reactions where electrons are exchanged. Not only do plant antioxidants defend against reactive oxygen and nitrogen species, but they also favorably modulate gene expression and promote cell maintenance, repair of genetic material, and longevity.

Although herbs and spices make up a small proportion of a meal, they also represent a potent source of antioxidants. Researchers state: “Sorted by antioxidant content, clove has the highest mean antioxidant value, followed by peppermint, allspice, cinnamon, oregano, thyme, sage, rosemary, saffron and estragon, all dried and ground”. Traditional botanical medicines are also reservoirs of antioxidants, which explains their therapeutic properties. Half of the plant medicine products analyzed ranked in the 90th percentile or higher for antioxidant capacity.

Beverages worthy of inclusion for boosting antioxidant levels are unprocessed tea powders. Monomer catechins such as epigallocatechin gallate (EGCG) and polymerized catechin such as theaflavin and thearubigen predominate in green tea and black tea, respectively. Chocolate is likewise a prominent source of antioxidants, with antioxidant content correlating directly with percentage cocoa.

Include Healthy Fats and Oils

Even short-term exposure to PM-2.5 is associated with dysfunction in endothelial cells, or the thin layer of simple squamous cells that lines blood vessels and lymphatic vessels, interfacing between luminal contents and the vessel wall. A disturbance in flow mediated dilation (FMD), or the capacity of a blood vessel to dilate with increased blood flow, reflects endothelial dysfunction, a key change in the development of atherosclerosis.

In middle-age volunteers, supplementation with three grams per day of olive oil for four weeks prior to exposure to concentrated ambient particulate (CAP) matter has been shown to prevent the reduction in FMD induced by particulate matter. Not only that, but this olive oil intervention blunted the adverse changes in blood markers associated with vasoconstriction (the narrowing of vessels) and fibrinolysis (the enzymatic break-down of blood clots). The researchers suggest that dietary inclusion of olive oil may “prevent deleterious effects of CAP exposure on vascular function and might, therefore, represent a practical approach to reduce the mortality and morbidity of cardiovascular diseases associated with PM exposure”.

In another randomized, double-blinded, controlled study of healthy middle-aged participants by the same group, supplementation with three grams per day of omega 3 proved to prevent deleterious changes in lipids, cardiac rhythm, and heart rate variability resulting from exposure to particulate matter. Another study also underscored how omega-3 fatty acids prevent systemic and pulmonary inflammation as well as oxidative stress induced by fine particulate matter, when administered either before or after exposure. The authors conclude, “Our findings demonstrate that elevating tissue omega-3 levels can prevent and treat fine particle-induced health problems and thereby present an immediate, practical solution for reducing the disease burden of air pollution”.

When used as part of a comprehensive regimen that incorporates an anti-inflammatory diet, stress management, exercise, and sleep optimization, these food, herb, and nutraceutical-based strategies can minimize the deleterious effects of exposure to air pollution, and optimize detoxification pathways to protect us from the onslaught of modern-day toxicant exposures.