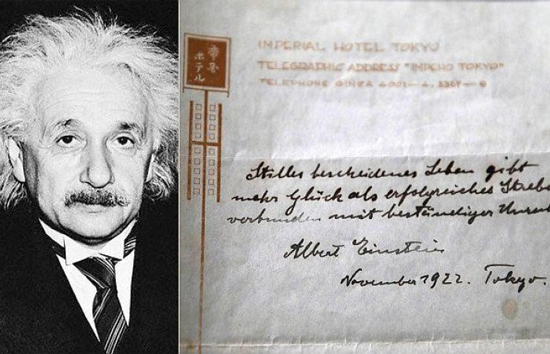 “If you want to live a happy life, tie it to a goal, not to people or things”, Einstein used to say.

Theoretical physicist Albert Einstein was more than just a brilliant scientific mind. He also had a lot of wisdom to share, particularly when it comes to the pursuit of happiness, and two recently discovered notes, dated from 1922, are proving this once again. Presented by a seller who chose to remain anonymous, the notes offer simple words to live by that remain relevant even today, 95 years later.

While on a lecture tour in Japan, Einstein stayed at the Imperial Hotel in Tokyo, where a courier arrived to deliver him a message. It’s said that Einstein didn’t want the employee to leave without a tip but local Japanese custom prohibited the courier from accepting – or perhaps Einstein had just run out of change.

In place of a monetary tip, he instead decided to write the courier a message, a move perhaps inspired by his increasing fame, as he was set to receive the Nobel Prize for physics and his name was becoming known even outside the scientific community.

He wrote the messenger two notes by hand in German, the first on plain paper and the second on Imperial Hotel Tokyo stationary. 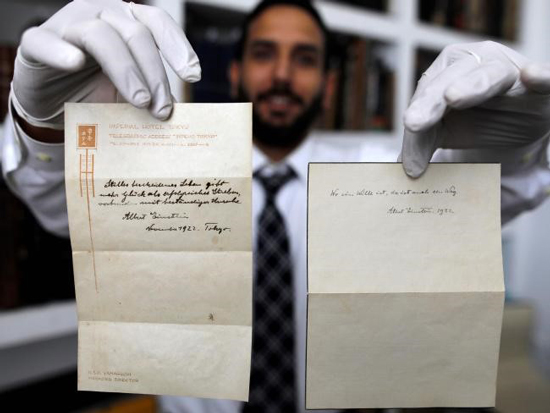 Gal Winner, owner and manager of the Winner’s Auction House in Jerusalem, displays the two notes written by Albert Einstein

The hotel stationary reads: “A quiet and modest life brings more joy than a pursuit of success bound with constant unrest.”
And the blank paper: “Where there’s a will, there’s a way.”
Einstein signed and dated the notes, and disclosed his location in the capital of Japan.

According to the seller, Einstein also told the courier: “Maybe if you’re lucky those notes will become much more valuable than just a regular tip.”

The notes went on sale in October 2017 at the Winner’s Auction House in Jerusalem.
The bidding for the first note (“A quiet and modest life…”) began at $2,000, but it quickly escalated and it was sold for $1.3 million.
The second note was sold for over $200,000.
The buyers remained anonymous.