Are You the Center of the Universe? Yes and No 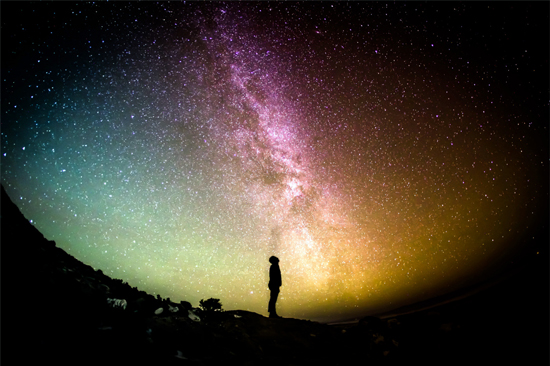 Great minds like the English physicist Brian Cox use the Hubble constant, the idea that the further a galaxy is from us, the faster it is “flying away from us”, as a way to explain why we’re not at the center of the Universe. He goes on to say that the Universe is like a ball of dough filled with raisins when you’re baking bread. As the raisins expand with the rising dough, the ones further from a singular raisin get farther away, and so on. Even though Cox can explain quantum mechanics in less than a minute, is even this genius a little off on his estimation of how the Universe works?

Particles or Waves or Both?

Cox states that according to Fenyman (another genius physicist) particles are particles, and they hop from place to place with a particular probability. Another, equally brilliant physicist who worked on the Manhattan Project and received a Nobel Prize in physics for work in quantum electrodynamics, Julian Schwinger, believed that the Universe is made up of fields.

Yet another quantum physicist, considered a rogue in his field by contemporaries, believes we live in a holofractographic universe. Essentially, he brings together quantum and classical physics viewpoints into a unified theory of everything. His work is documented well at the Resonance Foundation.

He has proven using mathematical calculations that protons are entangled (meaning Cox’s theory about particles is lacking) and that the very structure of the universe is created via a morphogenetic, zero-point field. So Fenyman’s theory of the universe being made up of fields is also still lacking.

In an article titled How Contemporary Physics Points to God, author Robert Spitzer states: “Our observable universe seems to have a finite amount of mass-energy. It has approximately 4.6% visible matter (matter-energy that can emit light, electromagnetic fields, etc.), 23% dark matter (which interacts with gravity, but does not seem to have luminescent or electromagnetic activity), and 72.4% dark energy (which seems to be like a field attached to a space-time field causing space-time to accelerate in its expansion). The visible matter in our universe seems to be approximately 10^55 kilograms which is approximately 1,080 baryons (protons and neutrons – particles with significant rest mass).”

That part “like a field attached to space-time” is the bugger. There is no space-time, except that which is created with our consciousness. Way back in 2011 scientists were figuring out that space-time has no dimension. And scientists are still struggling to determine if space-time contains the quantum field or if it is constructed from that field. However, the answer to that question is the same as the answer to the “are you the center of the Universe” question. Yes, and No. The field contains non-existent space time AND is created from it.

Even in a perfect vacuum (where there are theoretically no particles at all) there seems to be an intelligence. And though space-time does not exist, the correlations or relationships between objects or fields seem more fundamental.
The relationship between any one singularity correlates to all other singularity’s in the multiverse.

Our consciousness affects all points in the Universe, and thus alters its wave-particle action. Don’t believe this is true on the macro level? Look at the micro-level. Brain scans now indicate that future outcomes can be predicted based on a non-trivial quantum mechanical action in our own biological structure! Scanning your brain can now predict what will happen in the future. It’s Schrödinger’s cat paradox all over again.

What does this mean in non-quantum speak? The bulk relationship of your “singularities” or multiple-interacting-infinities makes up your body, and experience. The same goes for a flower, or a raindrop, just with varying degrees of consciousness. Spend time focusing on that, and you change the quantum fabric of the Universe – that which you are constantly creating. So yes, you are the Universe, but so are the raisins in Cox’s bread example.
They all interact: i.e. your consciousness is interacting with others’ consciousness to create our world – our Cosmic experience, right here on Earth.