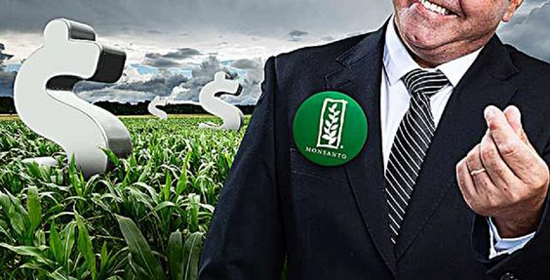 Almost two years have passed since Bayer announced a Monsanto takeover that would give the German company control over roughly one-quarter of the world’s seeds and pesticides.
Concerned observers understand that a Bayer-Monsanto megacorporation spells trouble for farmers, consumers, and the environment.

But in Big Ag’s alternate reality, the merger is in the public’s interest.
“We can bring better solutions, faster to the growers so they can help contribute to feeding an ever growing world. That’s what this is all about” Bayer CEO Werner Baumann told CNBC when the merger was announced in September 2016.

Monsanto CEO Hugh Grant said that combining his company’s biotechnology and data science assets with Bayer’s chemistry offerings will “unlock future innovation growers desperately need at the moment. Agriculture needs some of these new products. Farmers are starving for innovation”.

The Bayer-Monsanto plan for farmers might look something like this: growers purchase GMO seeds (such as Roundup Ready crops), herbicides, and pesticides from the company, which uses its technology platforms to collect and analyze data on soil, weather, and plant health. Based on this data, the company then offers products and services that (theoretically) improve crop yields.

In short, Bayer-Monsanto would be positioned to loop farmers into a system of corporate control that furthers their reliance on industrial agriculture practices. And this is supposed to be good for farmers.
But it’s not hard to see that the corporatization of our food supply is mainly good for the bottom line of companies like Bayer and Monsanto. Big Ag has been using the same arguments for decades to justify a food system dominated by monocultures and heavy chemical use. The difference is that we now know better and are demanding healthier, more diverse, and more sustainable food.

Here is a look at research which undermines the claims being pushed by “Bayersanto” to justify agribusiness as usual.

The global population is expected to grow from 7.5 billion people in 2017 to 10 billion by 2050. Big Ag uses this growth projection as an argument for increased food production. And it’s no coincidence that Big Ag has the “solutions” to boost crop yields.

But scientists estimate that farmers already grow enough food to feed 10 billion people. The authors of a 2012 study argue that the root cause of hunger is poverty and inequality – not scarcity. The world’s poorest people, who make less than $2 per day, cannot afford to buy food. The authors suggest that grain crops that go towards biofuels and animal feedlots could instead be used to feed the planet’s nearly one billion hungry people.

The United Nations estimates there were 815 million undernourished people in 2016, up from 777 million in 2015, despite there being more than enough food produced in the world to feed everyone.
The UN calls the current agricultural model, with its emphasis on a narrow range of crops and its heavy use of chemicals, unsustainable due to the environmental damages it causes, including land degradation, deforestation, over-extraction of groundwater, greenhouse gas emissions, loss of biodiversity, and water pollution. 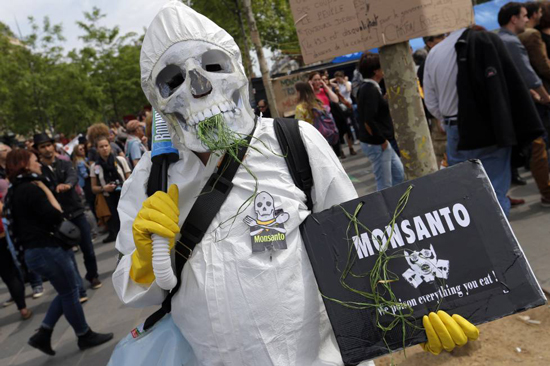 Engrained in the food shortage myth is a second myth: organic farming cannot produce enough food to feed the world.
A growing body of research, however, shows that organic farming methods could yield enough food on a global per capita basis to sustain the current human population, and perhaps an even larger population.

Furthermore, a study published in the journal Nature Plants concludes that organic farming delivers food that is more nutritious, more environmentally friendly, and contains less (or no) pesticide residues compared with conventional farming.

New research presented to the UN Human Rights Council denounces as a “myth” the idea that pesticides are necessary to feed the world. The report states that “Despite the harms associated with excessive and unsafe pesticide practices, it is commonly argued that intensive industrial agriculture is necessary to increase yields to feed a growing world population”. The report blames the billion-dollar pesticide industry for “systematic denial of harms” regarding pesticides and “unethical marketing tactics”.

Another study published in the journal Nature Plants concludes that almost all farms could slash pesticide use without reducing food production. The farmers studied maintained yields while reducing chemicals using methods such as crop rotation, mechanical weeding, and pest-resistant plant varieties.

From their inception, genetically modified crops have been marketed as indispensable to feeding the world’s growing population. We were also told that GMO crops could reduce pesticide use. But more than two decades into the GMO experiment, both of these claims are on shaky ground.

Because the United States and Canada embraced GMOs – but Europe did not – it is instructive to compare crop productivity and pesticide usage in the two regions.
An analysis by The New York Times using U.N. data finds that the U.S. and Canada have not realized discernible yield gains compared to Western Europe. Meanwhile, herbicide use has increased in the U.S. by 21 percent over this period, but Europe’s largest producer, France, has reduced its herbicide use by 36 percent.

In addition, a report from the National Academy of Sciences found “little evidence” that the introduction of GMO crops resulted in more rapid yearly increases in U.S. crop yields compared to the yield increases seen in the pre-GMO period.

Claim: Pesticide Use on an Industrial Scale is Safe 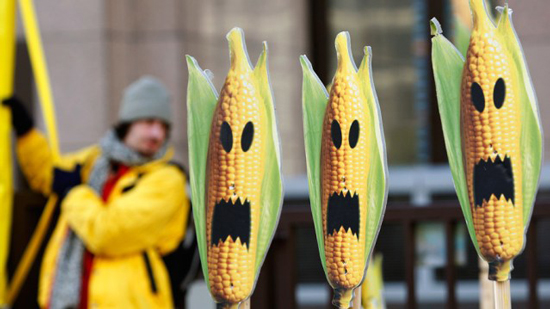 The idea that using pesticides at industrial scales is environmentally benign is more of an assumption than an outright claim. But this assumption is central to the way that pesticides are applied: without any limits or formal monitoring of their effects on the environment.
Exposure to chemicals in agriculture, in other words, is an ongoing experiment, and we are the guinea pigs.

The authors of a paper published in the journal Science contrast the way that pharmaceutical and pesticide safety is monitored. Pharmaceuticals undergo rigorous post-approval monitoring for adverse effects, while pesticides are approved on the basis of limited laboratory tests and field trials, and then used at industrial scales with no further monitoring.
“The effects of dosing whole landscapes with chemicals have been largely ignored by regulators”, the scientists said. “This can and should be changed.”

Monsanto’s Roundup (glyphosate) is the most-used agricultural chemical of all time, but evidence is emerging that glyphosate – originally patented to clean pipes – is a human carcinogen.

A leading FDA-registered food safety testing laboratory has found extremely high glyphosate levels in some of America’s most iconic food brands, including Cheerios, Annie’s, Kashi, Ritz, Oreo, and Lay’s. Importantly, even foods not made with GMO ingredients were found to have high glyphosate levels.

These findings are just a small sample of the evidence against large-scale industrial farming. Bayer and Monsanto want us to believe their joining together is in our best interest, but anyone who learns the facts can see that the merger between the two only leads to more of the same practices at a time when people are hungry for change.