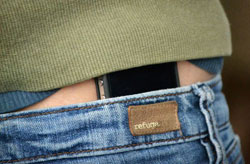 While expert opinion is still split on the harmful effects of prolonged cell phone use on the human body, a growing number of studies is indicating the exact opposite, identifying a connection between cell phone radiation and male infertility or breast cancer and other diseases.

Leading health organizations, including the World Health Organization (WHO) insist that the radio-frequency microwave spectrum used in cell phone communication or proximity to cell phone towers poses no health risks whatsoever, because the amount of radiation is minimal and therefore unlikely to cause any damage. Recent studies however seem to differ.

Male infertility and mobile phone use

Research conducted in Israel by Technion University in Haifa Professor Martha Dirnfeld and other fertility experts indicated that using mobile phones for as little as one hour per day can lower sperm levels significantly.

Keeping a mobile phone close to the testicles or within two feet of the body, as well as speaking on the phone while it is charging can lower the sperm count so that conceiving may become a problem. The findings were published in the journal Reproductive Biomedicine Online.

Similar results were reported by the Center for Reproductive Medicine at the Cleveland Clinic a few years ago. Their study demonstrated that keeping a mobile phone in talk mode in a pocket or otherwise in close proximity to the testicles can decrease sperm quality.

The research team took semen samples from 32 subjects to test the response to mobile phone emissions. The samples were split in two groups – a control group and a test group, the latter of which was placed an inch from an active mobile phone for one hour. The test group semen was exposed to emissions of 850MHz, which experts say is the most commonly used frequency.

The test group showed an increased oxidative stress, with higher levels of oxidants and free radicals and a decrease in antioxidants. This oxidative stress equates to damaged sperm and an overall decrease in semen quality, including viability and motility, according to the study coordinator and Center for Reproductive Medicine Director Ashok Agarwal.

This study, albeit smaller, confirmed previous research Agarwal conducted on data from 361 subjects, which showed that men who used their mobile phones four hours a day or longer had considerably lower sperm quality than those with reduced mobile phone use.

Furthermore, major concern exists about the possibility that mobile phone radiation can cause cancer. Some experts cite mounting evidence in support of the theory, insisting that there is an increased incidence of cancer in areas of the body that are typically closest to where cell phones are used or carried: breast cancer in women who usually keep their phones in their bra or testicular cancer in men who carry their phones in their pockets.

Although this type of research has been met with criticism by the industry, more and more studies are being conducted into the effect of cell phone radiation on the human body. In the meantime, experts recommend taking a series of prevention measures such as keeping the phone as far as possible from the body while using it or carrying it or even while sleeping.

As reported by The Truth About Cancer, the non-profit Environmental Working Group suggests the following:

– Avoid holding the phone up to the ear and use a speaker or headset instead.
– Even while using a headset, don’t keep the phone in your pocket or anywhere too close to your body.
– Try to text more instead of talking, as phones emit a lower amount of radiation when sending out text messages.
– Don’t keep your phone turned on and close to your bed while sleeping.

Regardless of your stance on the matter, the existing evidence is compelling enough to make you think twice before shoving your phone in your pocket or bra. As the saying goes, better safe than sorry, so putting some distance between you and your device might be a very smart, and potentially life-saving decision.