Brushing and flossing are critical for dental health, but are your kids using too much toothpaste? The CDC just silently issued a public health warning over children’s exposure to dangerous amounts of fluoride through excessive toothpaste use. Fluoride is a known neurotoxin and causes permanent damage to developing brains. While the dental industry may promote fluoride as some kind of miracle substance, the truth is that the fluoride added to our water supply and dental care products are toxic leftovers from the fertilizer industry. 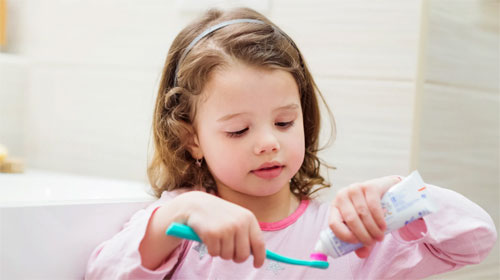 For years, dental care product manufacturers have loaded up their toothpastes and other products with dangerous amounts of fluoride, with no warnings whatsoever about how toxic this compound really is. Now, new research from the CDC itself shows that these “warnings” about using too much toothpaste are not sufficient enough to protect the public.

Back in February, the CDC released a report which found that children between the ages of three and six are using potentially harmful amounts of toothpaste. While advertising and marketing ploys make it seem like consumers should be loading up their brushes with toothpaste every time they brush, the truth is that even adults should only be using a pea-sized amount of toothpaste. For young children under age three, a strip of toothpaste the size of a grain of rice is sufficient.

The amount of toothpaste people should actually use is far less than what is shown on product packaging or TV. While the FDA mandated that fluoride-containing dental products come with a warning back in 1997, there’s been nothing done about the deceptive marketing and labeling which all but completely obfuscate the warning label and suggested amounts (which of course, are typically in fine print on the back).

As the CDC’s report finds, some 40 percent of children aged three to six are using way too much toothpaste. Overall, 60 percent of kids between ages three and 15 are filling up their toothbrushes with more than the recommended amount of toothpaste. Swallowing even just one gram of tooth paste can cause an acute fluoride poisoning incident, but there are also substantial concerns about the effects of long-term exposure to too-high amounts of fluoride via toothpaste.

The dangers of fluoride

Beyond the potential for an acute poisoning incident, data collected by the federal government also confirms that over half of all American children are exposed to so much fluoride that it is causing permanent damage to their teeth.

A stunning report from 2017 concluded that 57 percent of all U.S children aged six to 19 have dental fluorosis – a condition in which fluoride has permanently discolored the teeth. Fluorosis is signified by “hypomineralization” of the teeth, which means the tooth enamel is more porous than it should be, causing white patches and pits in the teeth. In severe cases, teeth can even begin to crumble.

While the CDC asserts their position that fluoride toothpaste and fluoridated water are necessary for human health, the statistics don’t lie: Children are being put in danger through excessive fluoride exposure, and it doesn’t appear to be doing much for “cavity prevention,” either. As PR News Wire reports, “cavity rates are actually increasing alongside the increased rates of dental fluorosis.”

Many health experts agree that if a poison circulating in a child’s body can cause damage to the teeth, it is likely doing damage elsewhere as well. And as Fluoride Action Network reports, fluoride is capable of causing harm to just about every organ system in the human body.

From damaging effects on bone health to reduced IQ, fluoride is an obvious threat to human health.

The Beauty in Numbers, and the Numbers in Beauty