The Beauty in Numbers, and the Numbers in Beauty

How mathematics helps us explain beauty.
You’ve no doubt heard the phrase “beauty is in the eye of the beholder.” What if the beholder is a mathematician? How do these creatures see beauty differently than others? Are there patterns to beauty? And if so, are they mathematical patterns? 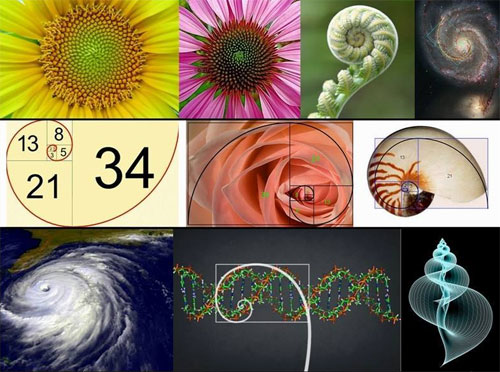 The Beauty in Numbers

Except for the first two, each number in the sequence is the sum of the previous two. (For example, 3=1+2 and 5=3+2.) Fibonacci stumbled on this sequence when thinking about how to count the offspring produced by a pair of rabbits. A hidden pattern emerges when you visualize the numbers differently. The image on the left creates squares whose side lengths are the successive Fibonacci numbers; the image on the right draws circular arcs connecting opposite edges of those squares:

The Numbers in Beauty

If numbers can generate beautiful patterns, do beautiful objects have some underlying beautiful mathematical pattern? Often the answer is yes. Take human faces, for example. A 2009 study found that “individual attractiveness is optimized when the face’s vertical distance between the eyes and the mouth is approximately 36% of its [the face’s] length, and the horizontal distance between the eyes is approximately 46% of the face’s width.” 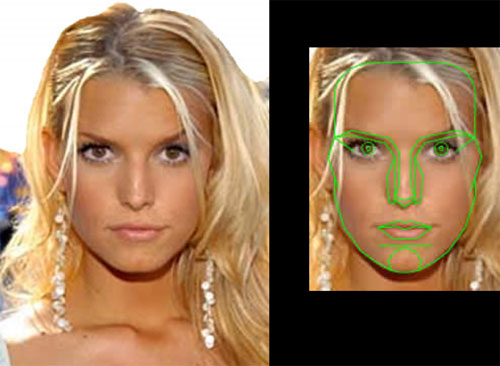 (You can explore this “mathematical face mask” tool yourself here.)

The face masks described above have also been used to generate more attractive pictures of faces from a given input. Here’s an example, courtesy of the Marquardt Beauty Mask: 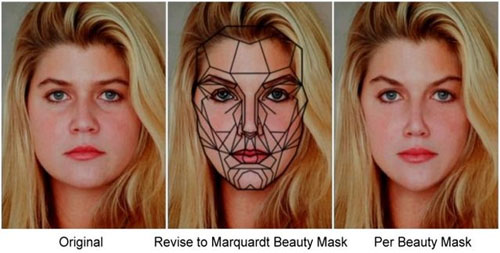 More generally, photography provides another excellent example of mathematics hidden behind beautiful objects. Indeed, amateur photographs can be made instantly more attractive to the eye by utilizing the Rule of Thirds, which advises we align objects in our pictures along the points and lines created by dividing the picture into thirds, both horizontally and vertically, as illustrated here:

Additional techniques, including using symmetry and finding triangles in your field of vision, can also imbue your pictures with beauty that others will recognize but have difficulty pinpointing the origin of.

While this article is focused mostly on the Fibonacci numbers and the various other patterns that emerge from it, there are many other numbers that give rise to beautiful patterns and objects.

A prime example (a classic math pun) is the irrational number pi (approximately equal to 3.14), the ratio of a circle’s circumference to its diameter. Embedded in every circle – a beautiful shape in and of itself – and appearing so frequently in mathematical formulas describing natural phenomena, pi is a truly magical number. It is advisable to invest four minutes of your time watching Rebecka Taule’s beautiful video illustrating pi’s majesty.

While there are many exceptions to the math-beauty connection that is highlighted, mathematics and beauty are often interlinked, and we hope this article has given you a new lens with which to view your surroundings and find the hidden beauty in it.

Indeed, the next time you see something beautiful we encourage you to ask, “Why do I find this beautiful?”. You’ll be starting to think like a mathematician – whose fundamental drive is to find and explain patterns – and most certain the answer to your question will involve some beautiful mathematics.