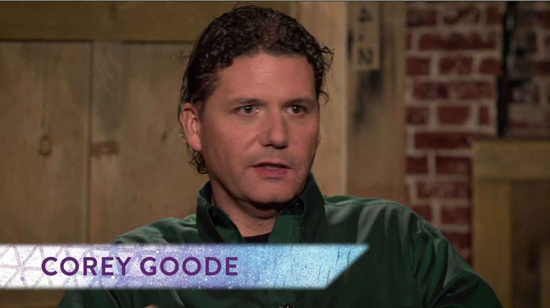 Here is another piece of intel, now almost a year old, that is still very highly relevant for today, if we are finally on the verge of seeing mass arrests:

[11/5/17, 6:49:36 AM] Corey Goode: Wow, just received a briefing.
The military is indeed getting ready for a potential decapitation of the Cabal with surgical strikes by SF [Special Forces] Teams.
They are already training by taping out floor plans of their targets on the floors of hangars and practicing kicking in doors.
They are also being briefed on their potential targets.
A “limited coup” is looking more and more likely.
In the briefing they once again stated the importance of having a minimum of 2 weeks of food/water in our homes.

[11/5/17, 6:56:31 AM] Corey Goode: It was further revealed that the Secret Grand Juries were almost totally complete with their investigations when everything changed.
They had sealed indictments being prepared when they received a cache of new info that gave them a wider net to cast.
Their investigation has since expanded dramatically….

CG: Most of the operations are non-violent, or what we wouldn’t typically think of as military.
They will range from propaganda, electronic warfare and covert teams that arrest people.
Some Secret Service/Body Guard positions were infiltrated, and some of these top figures are basically in custody and don’t even know it.
Many of the targets of these operations have their jets on 24-hour standby notice. Pilots are sleeping at air hangars, ready to leave at a moment’s notice.
Many of the targets of these operations have been denied safe haven in some of the bunkers where they were promised sanctuary, which is typical Cabal.
The planes will be intercepted by the US Air Force if they try to leave US Airspace.
The hangars are under observation and they now have a way to shut down all underground shuttles simultaneously.

And Now, On To the Satellites…

We are admittedly skipping over hundreds, if not thousands of newsworthy items to get us right up to the present, with the big news that hit as of August 30th.
Q Anon began releasing a cryptic series of posts, as follows:

Let’s Hold On A Minute Right There…

I was ten years old when the movie War Games came out in 1983. It had quite an effect on me at the time, conclusively proving nuclear war was ridiculous.
It all centered around a hacker kid who broke into the US nuclear launch computer systems, named WOPR or War Operations Planning and Response – and nearly started a war in the process.
The line “Shall We Play a Game” comes from the following scene in the movie:

The signature line from this movie comes at the end, when the artificial intelligence of the WOPR computer, calling itself “Joshua” concludes that nuclear war is unwinnable.
It wargamed out all possible outcomes of global thermonuclear war, and concluded “the only winning move is not to play.”

“Joshua/WOPR: Greetings, Professor Falken.
Stephen Falken: Hello, Joshua.
Joshua/WOPR: A strange game. The only winning move is not to play. How about a nice game of chess?”

Q’s quote of this famous movie line indicates that the Snow White and / or Corona satellites may have also been related to nuclear guidance systems.
Therefore, Q may have anticipated that the Cabal could have launched some sort of nuclear attack before the arrests, and now they will not be able to.
This War Games quote also implies that Q realizes “the only winning move is not to play” when it comes to nuclear war, and therefore it will be prevented.

Another group of satellites apparently were taken down right after the above, as follows:

The last quote suggests that some sort of retaliation against the Deep State is taking place, likely with the code-name “Horizon”.

Then On September 1st…

The above quotes seem to imply that the GCHQ and NSA’s mass surveillance system was completely cut off by these actions.
We have phrases like: “Blind eyes in the sky”, “Main frequency bands terminated, #Goodbye”, “Retaliation”, “Over the target” and “NSA no more”.
Their computers also seemed to be down, as implied by the phrase, “DDOS (Directed Denial of Service – a hack attack) 502s (bad gateway error, which is usually a server meltdown), and captcha.”

Later Q briefings suggested that one of the effects of this action was to force Deep State leaders to huddle together in person in order to have any communication.
This was mirrored in another Q Anon post from September 1st, which certainly carries a sarcastic tone.
Remember that a SCIF is a surveillance-proof Sensitive Compartmented Information Facility, SS is Secret Service, and the flagging of the word “Bill” suggests this refers to former president Clinton:

“Q !!mG7VJxZNCI ID: 9da84a No.2835711
Sep 1 2018 14:37:23 (EST)
It must be hard to communicate.
Every moment together is a moment you should not waste.
Former President’s are still able to arrange SCIFs?
Does the American taxpayer ‘foot the BILL’ for the [12] hotel rooms in close proximity to the central SCIF?
SS detail(s) ordered @ max perimeter def?
Nice color choice.
It’s a shame the windows had to be blocked out to eliminate that view.
Q”

Then On September 2nd….

Even more provocative clues were given the next day, suggesting that troops (Operation Specialists) were preparing for the big mass arrest “event” and would be working in military helicopters, as pictured: 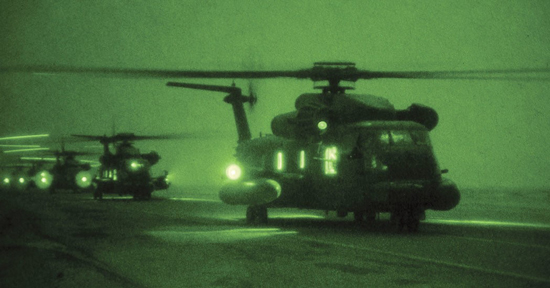 This last image appears to have been taken through night-vision goggles.
This appears to imply that this is a photograph of the helicopters that will be used by “Operation Specialists” in the mass arrests “event”.

Read the sixth part of this article

The Final Assault in the War on Cash