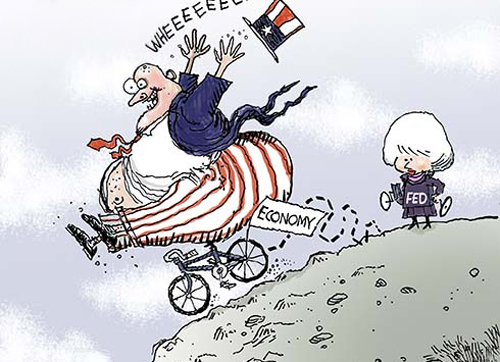 RT asked if the Fed was going to raise interest rates. The purpose of low interest rates was to restore the solvency of the balance sheets of the “banks too big to fail” by raising debt prices.

A real increase in interest rates would undercut the Fed’s policy of rescuing the balance sheets of the big banks whose balance sheets were loaded up with bad debt that desperately needed a rise in debt prices for the banks to remain solvent.

Moreover, over the long time period in which there was such well marketed concern over whether such an inconsequential interest rate rise would occur, inflation had risen, making the real interest rate negative well below the 18 basis points official interest rate. By the time the Fed raised the nominal rate, the real rate was already more negative. Thus, there was no rise in real interest rates. The financial press did not explain this, either from incompetence or collusion. RT accepted the fake news as reality.

Recently, after a long period of waiting for another interest rate rise, an announcement from the Fed, amidst further indication of US economic decline, announced another 25 basis point increase in the target range for the Fed funds rate. Inflation aside, in fact interest rates declined, as sometimes the author Dave Kranzler reported.

Despite this publicized “rise” of the Fed funds rate, the 10-year interestrate on Treasuries: “Has declined 30 basis points this year. Thus for certain borrowers, the Fed has effectively lowered the cost of borrowing.”

Kranzler went on to point out that “the spread between the 30-day Treasury Bill and the 10-yr Treasury has declined this year from 193 basis points to 125 basis points – a 68 basis point drop in the cost of funding for borrowers who have access to the highly engineered derivative products that enable these borrowers to take advantage of the shape of the yield curve in order to lower their cost of borrowing.”

Why is the Fed raising short rates when the long rates are falling? Why do “democratic Western democracies” have central banks that do nothing except protect big banks at the expense of the people? How long will the insouciant peoples of the West continue to conspire in their own demise? 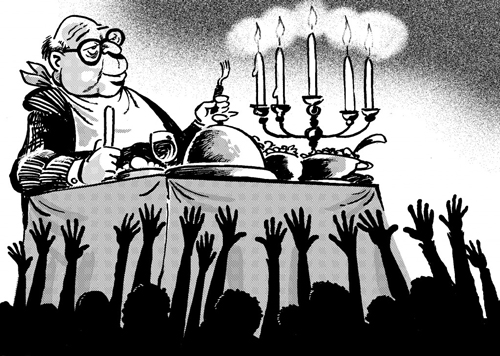 There is a funny thing that happens in a fiat debt slavery financial system. It always reaches a point where debt reaches a point that it can go no further. Simply, the system runs out of borrowers and the existing borrowers cannot afford to pay their loans. The system goes bankrupt.

That’s pretty much where we are right now with the Western global financial system.
The casinos have run out of Players and the lending bubbles are about to burst (car loans, mortgages, credit cards, commodities, stocks and bonds, and all kinds of colored paper currencies and the pile of worthless derivatives that all these are bet on). No one wants colored paper any more unless it has something of real value backing it up. Bye, bye Dollar, Pound, Euro and Yen!

When there are no longer any major borrowers or financial Players with real money this fiat monetary system stagnates and then “crashes”. Simply the liquidity goes out of the market as money looks for safe havens and then finds none. Who wants a bond with negative interest?

Currency that is about to be inflated out of existence? Stocks in collapsing industries that are 30 times over-valued? And there isn’t any real gold for sale?

Whistleblower: “All Misery on Earth is a Business Modelˮ

Dutch banking whistleblower Ronald Bernard is back and this time he’s exposing the entire international banking syndicate which controls not only the global monetary system, but the entire planet itself and all of its resources.

The Bank For International Settlements sits atop the pyramid of power, followed by the IMF and World Bank. The power and directives flow downward through the big international banks, the multinational corporations, and finally to the governments. As Bernard explains, “All misery on earth is a business model.ˮ

The situation can be temporarily propped up by trying to print more colored paper or by creating digits out of thin air, but this just leads to inflation and a devaluing of the colored paper.

Hey, let’s do another QE and create austerity programs while taxing the heck out of the public! Sound familiar? It is all a grand con job! So what is the game play?

Obviously the East has all the real collateral, whereas, the Western Cabal has colored paper which is worth only as much as toilet paper. So the rest of the World (BRICS and friends) says to the Western Cabal, “We don’t want your colored paper any more. We want real goods and services like we gave you before.” The Western Cabal replies, “Do you want more guns and bombs? How about earthquakes and floods? Or would you prefer regime change?”

“No thank you,” says the East. Well maybe only countries like Libya, Syria, Iran, North Korea and Russia and they all get aided with sanctions, guns, bombs, earthquakes, floods and regime change alternatives.

But the financial screws are slowly tightening on the West and this time things are not going to work out so well for them. If they choose to collapse the casinos, “who will have the real money to buy these assets at rock bottom prices?” Then who will own the West’s banks, financial institutions and key industries?

So their plan is to have a “revaluation” based on an algorithm that somehow determines a country’s wealth and subsequently the value of their currency. Have you ever written an “algorithm”? They are as phony as an insurance adjusters book and based on false data and statistics.

It looks like monkey business to me especially since the people never see what really goes into these calculations. Just try and ask, “Can you please explain to me in detail just how you derived this figure?” The reply will be, “Duh. Officer, please escort this person out of the building.” Another obvious con job. So where do the people go from here? Another con job?

The facts are– all current corporate financial systems are based on “fraud”. So the people want to continue being “slaves” or will they wake up and change the system?

In order to change the existing system, it needs to be choked into submission. Starved from real asset backing, the old financial and political system will collapse and that can create a global mess. The old solution was to go to war and steal more assets. That won’t work this time.

So what can human beings do? This is the time to start discussing “alternatives” and how to implement them. The whole World is in transition and each country, state, county, city, township and family need to awaken to these facts and start discussing alternatives and focusing on implementations.

New technologies will be released to handle some of these problems but discernment is required. Digital money and RFID implants are not a solution, only more slavery. Nor are a One World Government and NWO “Agendasˮ.

The options that remain should be brought forward. It is time to start asking questions, developing plans, researching alternative systems, try different things. A journey of a thousand miles starts with the first step.

The ‘Deep State’ and the Unspoken Crimes of the U.S. Empire – Operation Gladio